But the online chemistry they share is nothing compared to the sparks that fly when they finally hook up.

NOTE: This hot little story appears in the anthology "Boys in Heat" published by Cleis Press and in my print collection "Shorts." 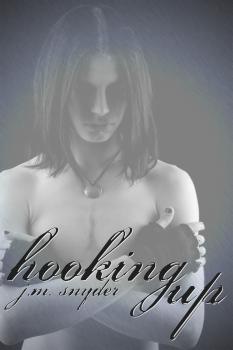 At the last possible second, Damien turns the wheel and eases to a stop at the curb in front of me. Then he cuts the engine and steps out before I can push away from the wall. With quick strides he comes at me, a commanding look in his eyes that makes my dick take notice. I'm just about to say something stupid like, "Hey Damien," when he steps up beside me and leans against my arm. The chill of air-conditioning lingers around him, making him seem impossibly cool on such a hot day, but when he touches my bare midriff with black-tipped fingers, my flesh burns beneath his. He's a few inches taller than me and glowers as if trying to tattoo me onto his brain. When I start to speak, he covers my lips with his in a silencing kiss.

For one breathless moment, his tongue enters me. I lean back against the warm brick, not caring who sees us here outside the mall, with his hand on my stomach, one finger tracing my navel, as he licks inside my mouth. He fills my senses and tastes like cherry lollipops, his scent a mixture of patchouli musk and the sweet sting of pot. He weakens me. I fumble at his waist, finding one of the belt loops on his black jeans, then rub my hand up under his black tank top and over taut skin to finger one erect nipple, hard as a nugget of gold in my palm. In public! my mind screams, thrilled. The hand on my stomach slips lower, sneaks beneath the waistline of my jeans, his thumb still circling my navel as he kisses me again and again. I sigh when he pulls away, and gasp each time he delves, hungrily, deeper into me.

Then he straightens, his hand now tugging on the zipper of my jeans as he stands back. I can't seem to catch my breath and I pray that he doesn't ruin this with some flippant remark like the ones he tends to make online, when he thinks I'm getting too serious about things. About us. "Brandon," he murmurs in a raspy, smoked-out voice that I feel in the back of my throat. There's a teasing glint in his eyes that makes me anxious. "You sexy thang."

I laugh, trying to break this tension, but it doesn't work and I have to avert my gaze from his. "Damien," I say, because I can't think of anything else. He's so damn intense. Somehow the webcam photos failed to capture that.