How to Tame a Cougar (MF)

Getting her to fall for his seduction takes on a slight challenge when they realize their age difference is even bigger than they both first assumed. It's not going to be a problem, though. So long as she keeps that spark in her eyes when she looks at him, he knows just how to tame a cougar.

"Although Damian and Shawna are fictional characters, some of the circumstances at the hospital setting in this book are based on real-life events. Take a guess at which ones they are. I pulled stories from my own personal dealings as well as stories from co-workers. Sometimes every day life is better than fiction!" ~ Dee ~ 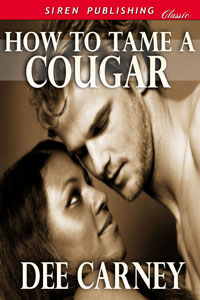 How to Tame a Cougar (MF)

5 BLUE RIBBONS: "How to Tame a Cougar was a great story. The attraction between Shawna and Damian was red hot, even when Shawna was reluctant to act on it. The scenes where Damian is flirting with Shawna were very sensual, and even kind of funny at times. Shawna's best friend was hilarious, and so well written that you can almost see her in your mind. All in all, How to Tame a Cougar was excellent!" -- Noelle, Romance Junkies

5 STARS: "It's not often that authors successfully infuse humor into their short stories. But Ms. Carney has done it wonderfully. There were time when not only did I laugh out loud while reading How to Tame a Cougar, but I laughed so hard I snorted. Especially when Shawna learns that Damian is just barely over 21! It was easy to imagine her shocked face and empathize with her. I love how even though she is literally swept off her feet by the young, hot stud she doesn't lose her common sense. Although Damian does his best to shag it right out of her! Boy does that young man take his task to heart...I can only hope to find a man that enthusiastic about pleasing his woman...How to Tame a Cougar does a great job of meshing a lot of different themes in a fresh and entertaining way...This is a story that I would happily recommend to anyone and will soon be joining the select few on my keeper shelf." -- T.S. Peters, Just Erotic Romance Reviews

4 KISSES: "As an older woman I am drawn to cougar tales. I enjoyed How to Tame a Cougar. It was believable to me. I could understand Shawna's reluctance to get involved with a younger man. She has her fears over him leaving her because she's aging and her body isn't a young, tight body anymore. But I like how Damian doesn't see the limitations Shawna does and tries to make her see that he's ready to make plans for a future together. He'll even accept her terms to have that future. The bar scene was just so realistic I had to laugh. There is always the one guy hitting on all the women until one finally accepts his drink and goes home with him. I liked Shawna's friend Ashlee who is straightforward with Shawna. She tells Shawna to compare Damian with the guy at the bar. She's always on Damian's side. Ashlee's a friend to keep and treasure. How to Tame a Cougar was a fun, quick read that made me want to see Shawna accept the love Damian has to offer regardless of their ages." -- Sheila, Two Lips Reviews

4 CHERRIES: "How to Tame a Cougar is not your typical May/December story. Ms. Carney is a true wizard of the written word, weaving a tale that had me feeling the characters' dreams and emotions and then laughing until my sides hurt. Talk about laughing until you cry. I know I did right from the first page. I could feel Shawna's age as her back screamed from lifting Mrs. McDermott out of the wheelchair but then the loose bladder happened and I couldn't stop laughing. This is how the entire story is woven. I could picture every scene as it happened and kept pulling for Damien to break through Shawna's barriers regarding their ages. The characters in the story were incredibly realistic. I could see myself in the character of Shawna since I am also in the Cougar age bracket, some aches and worried about what looks proper. I have a friend just like Ashlee who pushed Shawna to open her eyes regarding Damien. But it was the character of Damien who I loved the most. His perseverance in breaking down Shawna's barriers and willingness to do whatever she wanted to assure their happiness showed me a maturity that many older men lack. I found How To Tame a Cougar to be not only a sexy, hot story but one that is hilarious also. I know I'll be rereading this short again and again. Kudos Ms. Carney for another winner." -- Hibiscus, Whipped Cream Romance Reviews

The cityscape filled her vision. Blues, greens and grays decorated the many buildings that surrounded the hospital. The occasional tree peppered the view. From here, she could see what the city planners had once dreamed of. A landscape so beautiful, it could only be described as picture perfect.

“I’m in my last year of school to be an architect. I love coming here for the view.” His hushed voice in the quiet room blended into the ambience almost as if he belonged to it.

“This is beautiful, Damian.” She pressed her hands against the windows, heedless of any prints that would remain. How could this have been under her nose all these years and she’d never noticed?

“Next to you, Shawna, it might as well be a blank canvas. You make it perfect by standing there.”

Oh wow. Her mouth fell open, and she remembered to close it. He really did have it bad for her. She didn’t dare turn to look at him. If she did, she would be lost.

His warm hands on her shoulders were her only indication that he’d moved. They squeezed gently, massaging some of the stiffness from her day.

Over the pounding of her heart, outside the thick windows, the sounds of the city played. Car horns honked. The occasional bird sang. A single dog barked.

Inside the room, blood boiled within her veins. The firm pressure of his massage sparked dual flames. The heat cascaded down her arms, over her torso, almost melting her insides.

“You’re a perfect example of architecture.” His breath caressed her cheek and tickled the top of her ear. “May I explain?”

“Here,” he whispered as a hand moved to stroke her chin, then down her neck, “is God’s eave. Made in perfect alignment. Designed to accentuate. And here—” his touch travelled across her collar bone, “mitered in construct for support. And see over there? The domes?” The buildings a few miles away would be hard to miss. When she nodded, he continued. “They are man’s attempt at replicating this perfection. The cupolas of woman.”

Soothing hands traveled over her stomach to graze the rounded globes of her breasts. He stroked them gently, as if memorizing every inch of her. Her nipples strained in response, only to be ignored.

“What else?” she asked. Catching her breath took some work. “What else can you teach me about architecture?”

His hands slid down her abdomen and stopped at her bellybutton. “Hmm. This bit of decoration might be a frieze.”

“A frieze,” she repeated. Only a few places of her anatomy remained to be compared. She’d get him to ease her tension one way or the other. Her voice grew husky. “What else?”

Her mind drifted again to thoughts of Damian. What would it feel like if his hands caressed her now, his olive skin next to the mocha of hers? Maybe his hands would be calloused with hard lines that rubbed over the soft curve of her belly.

Her fingers trailed down.

He’d part her thighs and inhale the scent of her sex. Maybe he’d even dip in for a taste, letting his tongue swirl over her clit. The resultant sensation would send lightning bolts through her body.

Shawna’s finger sought and found the hardened nub. She stroked it lightly. With each touch, she increased the pressure, sending shooting sparks of pleasure rippling out in waves.

Her thighs would involuntarily tighten around his head. She’d run her fingers through his hair and pull him closer. Her hips would tilt to him. She’d give him all of herself.

She moaned out loud. It slipped past her lips, breaking the silence. An amazing tingling sensation streaked out from her center and traveled her length until it saturated her limbs. Shawna stroked harder and faster, chasing ultimate release.

Damian. He’d grip her tightly, holding her in place to ride out the pleasure he gave her. He’d suck and nibble. Taste and explore. And she’d shudder around him. Her pussy would tighten.

It throbbed now, pulsing a needy rhythm as she walked the line of orgasm and almost tipped into its embrace.

She called up a stronger image of Damian between her thighs. And finally, finally two more strokes to her sensitive clit propelled her over that edge.

Shawna cried out his name as she shattered into a million brilliant stars. She soared above the heavens, then floated gently back to earth. By the time she caught her breath, her racing pulse began its descent too.

With her body tingling and full of life, she rinsed quickly. All days should end like this. She’d rush to get home before the feeling dissipated entirely. Maybe she’d still run the tub and enjoy some wine anyway.

The inadequate towel covered just her tender bits, but she kept it on as she stepped out of the bathroom to dress. On the bed next to her clothes, the real Damian perched like a hunter about to pounce on its prey.

With a glint in his eyes, he said, “You were going to call me when you needed to let off some steam. I could have made that orgasm much, much better for you.”

Not a Dragon's Standard Virgin (MF)
Siobhan Muir
In Shelf
$5.50
Tweets by
sirenbookstrand