Like the rest of humanity, Dawn Vincent had goals and a plan for her life. She delivered babies for a living and dreamed of one day having some of her own with her soon-to-be husband. That changed the day that fire rained down from the skies above.

Over a year later, with the survivors of humanity scrambling to survive, Dawn established herself as a doctor who spent more time fixing bullet wounds than runny noses. Buried in her work to avoid the painful memories of her lost fiancé, Dawn’s only reprieve from madness comes from time spent with a reckless woman who serves as a soldier. Angie tries to help Dawn out of her shell until she herself is lost on a mission.

Unable to cope with another loss, Dawn finds strength from within. Refusing to take no for an answer, she wrestles control of the band of survivors and reminds them all of what it means to be human and how very valuable even a single life can be. 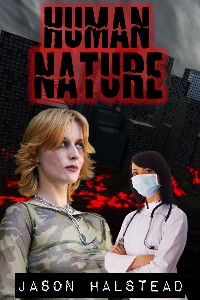 "Human Nature is a truly magnificent book. I am amazed at how much depth and complexity all the characters and the plot have. This isn't just a book about aliens invading the Earth. This is a story about how to be human in a world where humans aren't relevant anymore...Angie and Dawn are incredible characters..."

Dawn yelped as the door to her truck opened and roused her from a deep sleep. She grabbed her blanket defensively, hugging it to her chest, and twisted around to stare out her door. At first she nearly screamed again at the face that she saw, then she relaxed and returned to grin.

Angie was back, the grease and dirt still smeared on her face to help camouflage her. “Move over chicky!” She said, climbing up into the already occupied seat and forcing Dawn to yelp and scramble to get out of her way.

“Your side’s over there!” Dawn protested, pointing to her feet.

“Sweety, I’ve been in some cold and miserable places over the last couple of days. There’s nobody up and nobody I’m fancy on right now so I’m not getting laid. That means it’s your job to help warm me up.

“Uh uh,” Angie said, grabbing one of the rags Dawn kept at hand and rubbing the grime off her face and hands as best she could. With that finished she held out her hand. Dawn sighed and rolled her eyes, then twisted around to reach into the back and grab a bottle of rubbing alcohol.

“Hey, that reminds me, I got you something,” Angie told Dawn as she was contorting herself for her friend’s benefit.

“It better be a chocolate cake,” Dawn grumbled, turning back to her and handing her the plastic bottle.

“Better,” Angie said with a grin. She let the matter drop, switching instead to talking about the recon she had been doing. “The bombs knocked all the tall buildings down, anything over three stories is a deathtrap. I found a mall Dawn… a mall!”

Dawn smiled wistfully. A mall meant shopping, at least back in the good old days. And what girl didn’t like shopping?

“It was picked over pretty good,” Angie continued, shrugging as she used a dirty mirror Dawn handed her from the glove box to wipe the last of the urban camo from her face. “But they didn’t pay much attention to the Victoria’s Secrets store.”

Dawn groaned. “What are you going to do with stuff like that?” She asked, shaking her head.

“Me? Not much,” Angie said with a smile. “You, on the other hand, are going to get back in the game!”

“What? No!” Dawn protested. Angie had been after her for the six months they’d known one another to hook up with somebody. Anybody, really, her friend wanted her to have a chance to blow off some steam and have a good time. Angie didn’t understand it wasn’t that easy. After Chad nothing like that would ever be easy.

“Oh come off it,” Angie said, handing back the alcohol and the mirror. She tossed the rag onto the dashboard then struggled to reach into her jacket pocket and pull out some bundles of red and white lace. She pushed them into Dawn’s lap with a grin.

“You’re crazy, you know that?” Dawn asked her, rolling her eyes and smiling in spite of herself.

“I must be,” Angie agreed, smiling serenely. “And hey, even if you don’t use them like I suggested, at least you’ve got to appreciate having some clean new panties.”

Dawn was nodding before she realized it. Clothing was a chore in the camp. Most people had one, maybe two changes of clothes. They did laundry whenever they could; socks got first priority, then outer clothes. Underwear were rapidly becoming a luxury item.

“Now then, what’d I miss?” Angie asked, wiggling out of her jacket first. She tossed it onto the passenger seat then dumped her boots on the floor in front of it. Her pants joined soon after.

“Not much, just an ambush,” Dawn said, watching the clothing fly and wondering why she was putting up with it. It was going to be way too cramped in one seat for both of them. There was no way they could sleep or get comfortable, and definitely no way for them to stretch out across both seats with the console in the way. The console was not raised far above the level of seats but it was a bump that made it impossible to find any sort of comfort. The best they had managed was to let it rest perfectly under their thighs and knees.

“Ouch, I heard the shooting, figured that was us. Anybody get hurt?” Angie asked, reaching back and unhooking her bra.

Dawn stared at her, then quickly looked away. She looked anywhere but her best friend’s chest. Unlike Dawn, Angie needed a bra. The girl was in great shape, her boss made sure of it, but no matter how many miles she jogged her breasts still managed to be noticeably bigger than the modest handful the medic had. Dawn hated her for it too. Most women did, and it was something occasionally talked about in the showers. Angie shrugged it off, not denying the fact that it was good genetics and nothing else, but she also didn’t try to draw attention to it. The other women still ended up wishing her a long life filled with backaches as she aged.

“We’ll be at least 12 people down when we leave in the morning,” Dawn said, trying to make it sound casual.

“Double ouch,” Angie said. Her voice softened as she turned to look at the medic, “Hey, you want to talk about it?”

Dawn smiled and shook her head. She bit her lip, suppressing the lump that was trying to rise into her throat again.

Angie smiled and patted her on the blanket covered thigh. Dawn glanced down and saw that her friend had liberated some new panties from the abandoned store herself. Black, lacy, scandalous, and she was absolutely certain, a thong. The distraction made her smile and roll her eyes.

“Come on, I haven’t slept in almost two days. I need some cuddles and you’re going to give them to me, whether you like it or not!”

Dawn squawked as Angie yanked the blanket from her and settled in next to the self-conscious medic. Dawn felt Angie’s breasts press against her back and her arm through their thin t-shirts, then Angie’s arm crossed over and hugged the woman to her. Her hand slid up between her breasts and rested gently. The blanket was back over them, trapping the heat generated by their bodies. Dawn felt Angie’s thighs and hips brush up firmly against the back of her legs and her ass and she gasped a little.

“Relax, I won’t bite,” Angie told her, moving her hand quickly and digging her fingers playfully into Dawn’s ribs.

Dawn squirmed and squeaked, feeling ticklish. Angie relented and the medic felt relief. Snuggling they did from time to time, but Angie was such a touchy feely woman it sometimes made Dawn feel awkward and like she didn’t know what she was doing. Even worse was when she missed the playful touches and pranks.

“Mmm, you feel so nice and toasty. Soft and smooth too,” Angie added, pressing herself into her.

Dawn had to admit that Angie did feel cool to the touch. She wondered what it would be like, being alone out there. Dawn felt alone most of the time anyhow, but she at least had people to talk to. People that usually wanted something from her, even if only a smile. Angie didn’t have that; when she went out it was her against the world, and the world had not been a safe place for a over a year now.

Dawn’s breath caught in her throat when she heard that. Rather than confuse her more, Angie’s breathing dropped into something deeper and regular. Dawn felt safe and secure, she realized. It wasn’t like when Chad used to hold her, but it wasn’t so different either. Chad had been strong, stronger probably than Angie was though the girl was definitely no slouch. Angie was softer though, so very soft and… Dawn growled low in her throat. What the hell was wrong with her?

She fell back on her old standby, recounting the names of the bones in the human body. By the time she reached the knee she was fast asleep. Somehow between the phalanges and the patella her hand had moved to cover and squeeze Angie’s. 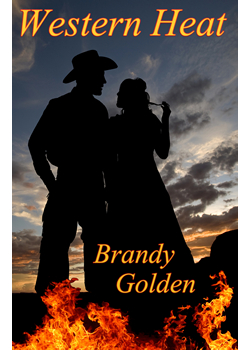 Spank Me I've Been Bad
Michelle Carlyle
In Shelf
$7.00
Tweets by
sirenbookstrand