Wealthy, titled, and very privileged, Lady Katherine Hardwicke successfully eluded some of the best thieves in the world in a quest to obtain the Fortunate Buddha. Her time is running out and her enemies are closing in, and one deliciously enigmatic man seems determined to get in her way. Will he save her or end her quest forever?

Jarod Parker wears many faces and lies for a living, but when the same thief steals the Buddha out from beneath his agents not once but twice, this handler returns to the field. His target? The last woman anyone would suspect of being the thief. But is he really after the Buddha or has this brilliant woman stolen his heart?

Their sensuous game of cat and mouse turns deadly when a third player turns up the heat, but can these two liars come clean with each other or will they lose it all? 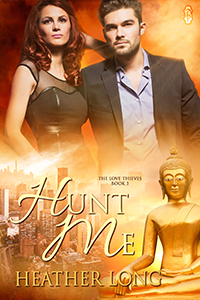 A very masculine hand caught the door to the vestibule and pulled it open. Startled, she glanced to find Parker smiling at her. His easy expression didn’t quite reach his eyes. “Mr. Parker….”

“Lady Hardwicke.” His voice lacked any discernible accent but possessed a distinctly masculine quality, low and direct. He motioned her through the door and followed her. He caught the second door to the street, opening it as well.

Traffic noise spilled over them as they stepped out onto the sidewalk. “You handled those men very, very well up there.”

She appreciated the compliment. “Thank you. You didn’t seem to have much to add to the conversation.”

“It wasn’t a conversation.” The right corner of his mouth curved with a hint of wryness. “Or, at least, that wasn’t their plan. They wanted to brief you, have you sign off, and move on.”

She nodded, bemused he’d noticed. She walked over to the limo and handed her purse to the driver who opened the back door and stowed it inside. “It’s what they usually expect, although I’ve never done what’s usually expected of me.”

“I liked it. You handled all of it gracefully. But why Dubai?” He canted his head, curiosity in his tone, not criticism.

She wore four-inch heels and still had to look up at him. Crossing her arms, she considered ignoring his question and asking him to join her for the ride to the airport and drinks along the way. But she never mixed business and pleasure.

He wore no ring on his left hand and no tan line betrayed the recent presence of one. But it wouldn’t be the first time a married man decided to forgo the wedding band.

“Why not Dubai?” She turned the question back on him. “It’s a wealthy region, plenty of opportunities, multiple construction projects, and booming Western interests.”

“Because it’s a glut, too. You’re not looking at creating anything new or cutting edge as you explained to Miles. So is Dubai a distraction to focus them elsewhere and rile them up at the same time?”

Intrigued, she arched both brows and closed the gap between them to less than a foot. “Why would I want to distract them?”

“So you can close the deal you really want and then make a peace offering by conceding to their wishes.”

Her belly fluttered. Oh, hello, Mr. Intelligent and Sexy. The combination should be illegal. “Interesting supposition. What deal do you think I’m really after?” If only she planned to stay in the city for another few nights, she might be able to explore the depths of this man—or at least find out if he was married.

“You didn’t comment on the Costa Rica proposal at all. In fact, you distracted them with a colorful golf joke and derailed the entire conversation for an hour.”

A warning tingle raced up her spine. “Clever deduction, but maybe I like golf.”

Parker laughed, a hard, delicious sound which caressed her. Excitement curled in her chest. “Must explain why you stared off into space when they debated the last Master’s.”

Did he watch me through the whole meeting? She rifled her memory for what areas of their organization he represented but couldn’t place him. “I learned a long time ago, it’s good business to not disagree with the men you’re talking to, particularly about their favorite sports.” She made a show of glancing at her watch, even though she knew the exact time. “I have a flight in a couple of hours. Would you like to join me for drinks on the way to the airport? My driver can take you wherever you need to be after.”

“I would enjoy the time.” He motioned to the car.

Ronald, her driver, gave her a mildly amused look as she slid past him and into the car. She scooted over the seat and moved her purse before Parker joined her.

Leaning back, she crossed her legs, very well aware the skirt rode up and with no table between them now. “So, tell me about Costa Rica, Mr. Parker, and why you think it’s the deal I should be interested in?”

“I’m sorry?” She played dumb easily enough—paint on a pretty smile, lift her brows, and blink. Most men bought it.

“Jarod Parker.” He held out his hand, and she took it. “But please, call me Jarod.”

Electricity skated over her palm at the warm contact. His fingers closed on her hand, and she realized how large a man he was. Appearances really can be so deceiving…. “All right, Jarod. Call me Katherine.”

He matched her smile and raised the ante, holding her hand hostage. “Would you mind Kat?”

“Kit.” He rolled the name around on his tongue. Her gaze went unerringly to his mouth. What else could he do with his tongue? “Kit Kat—I like it.”

Giving It to the Bad Guy (MF)
Sam Crescent
In Shelf
$3.99
Tweets by
sirenbookstrand