Pain lanced through his head, threatening to split it open like a melon. If this was what Heaven felt like, Anemone had been lied to. Wasn’t it supposed to be fluffy white clouds and peace?

So why was he in pain?

Pushing past the pain, Anemone tried to figure out what was going on. A deep voice was talking somewhere close by, soothing Anemone. He wanted to burrow into that voice.

He turned his head toward the sound. Another shot of pain shot through him as his head protested the move. A hand cupped his cheek and Anemone instantly relaxed once more.

An image of mocha colored eyes flashed through his mind as he heard the man speak. The need to see for himself if that voice belonged to his cat shifter, had his eyelids lifting. Bright blinding light had him slamming them shut once more.

The hand left his cheek and Anemone whimpered at the loss.

Anemone didn’t know who the man was calling beauty but he appreciated the man turning off the light.

That hand was back, this time a second one also held Anemone’s right hand. “Okay, you can open your eyes, beauty.”

Slowly, he opened his eyes a small amount, testing the man’s assurance, Anemone was relieved to not be blinded by a bright light. Opening them the rest of the way, the first thing he saw was his cat shifter fantasy, except, he was pretty sure it wasn’t a fantasy. “Ar...” His mouth was too dry to make any more sound.

The hand at his cheek disappeared to be replaced by a straw at his lips. He took a sip. The cool liquid soaked right into his parched mouth, trickling down his throat easing the dryness.

One more sip and Anemone felt he might be able to talk. “Are you real?”

Those mocha eyes rounded for a moment before a big smile lit up that chiseled face. “Yes, beauty. I’m very real.”

He didn’t understand why the man kept calling him beauty. But to have his fantasy come to life, Anemone wasn’t about to worry about it. The man could call him anything he wanted as far as Anemone was concerned, just so long as he continued to talk to him.

“How is our patient?” Another man was suddenly there on Anemone’s other side. There was something about the man that Anemone instantly trusted. A kindness that exuded from the man.

A low growl rumbled through the room. Anemone frowned at the sound. He turned to find his fantasy man glaring at the other man, who had done nothing more than smile at Anemone as he asked after his health.

Only when the doctor took a small step back did his fantasy shifter relax his tense stance. Anemone had no idea what was going on, nor was he sure he cared. The pain in his head was starting to worsen.

“Beauty.” That warm hand was back cupping his cheek, tilting Anemone’s head back to face him. “Can you tell me your name?”

Realization dawned. The man hadn’t known his name, that’s why he kept calling him, beauty. “Anemone.”

Full lips tilted into a small smile. “Anemone.” The man said it with such reverence, Anemone felt cherished. Which was weird that he could feel that way just from someone saying his name.

The other man, the one in a white coat, that Anemone assumed was a doctor, cleared his throat. “Anemone...”

Another growl filled the room before the doctor could say anything more. The doctor rolled his eyes dramatically, even throwing up his hands. “Really?” the man said to Anemone’s fantasy shifter. “I can’t even say his name?”

His fantasy shifter blushed slightly but continued to glare at the doctor.

“Exactly what do you want me to call him, Hunter?” the doctor asked.

Hunter. That must be his fantasy shifter’s name. He liked the name, it fit the man somehow. The man was just over six feet of lean muscle. Every move the man made screamed a predator who used stealth as his biggest weapon.

Hunter shrugged at the doctor’s question. “How about you let me do the talking?”

Anemone would have found the exchange funny except the throbbing in his head hurt too much to laugh. “How about one of you take this headache away.” His words barely audible as it hurt too much to speak.

His jaw nearly dropped to the floor when Hunter stepped out of the bathroom with nothing more than a towel wrapped around his hips and a slight blush on his cheeks as the man hurried to the closet.

All that skin on display had Anemone drooling for a taste. His gaze scanned every inch of that sculpted body. All sorts of dirty thoughts raced through his mind until he looked into those mocha-colored eyes. The hesitant concern marred their perfection.

It was like cold water had been dumped over Anemone as he started to understand if he didn’t do something drastic Hunter would continue to keep his distance. A plan began to formulate as he watched the man literally yank the first clothes he could reach off their hangers before turning to rush back into the bathroom.

Decision made, Anemone moved quickly. He stripped off his clothes leaving them in a heap on the floor as he didn’t want to waste time picking them up. Heading for the bed, he reached into the bedside table where he’d seen a bottle of lube.

He laid with his back against the mattress with three pillows supporting his head and shoulders. Planting his feet on the mattress, he coated his fingers with the slick substance. Reaching his hand down past his groin and balls, he shoved one finger deep inside his channel.

A soft hiss escaped from his lips at the slight burn. Not willing to miss out on this opportunity, Anemone pushed in a second finger. This time the burn morphed into pleasure as Anemone continued to open himself up.

A moan spilled from his mouth just as the bathroom door opened. Pure fire filled Hunter’s eyes as he watched Anemone for several moments. The man licked his lips, then took a step closer.

Hope blossomed inside Anemone as his mate continued to stare at where Anemone’s fingers were stretching his ass. Another two steps closer and Hunter was there, right next to the bed.

He reached down to touch where Anemone’s entrance was stretched around his fingers. The man’s heated gazed looked down at him as one of Hunter’s fingers joined Anemone’s.

“Are you sure?” Hunter’s mocha eyes pinned his own gaze. The man amazed him as he held himself back even though those eyes conveyed just how much Hunter wanted to devour him. All those delicious muscles were tensed as if Hunter were having to hold himself back from fucking Anemone through the mattress.

The moment Anemone said, “Yes,” Hunter pulled his shirt off and climbed onto the bed next to him.

His mate’s body hovered over his for an instant and as much as Anemone hated to admit he had a flash of fear. It wasn’t Hunter, but a memory of the guards. Desperately he tried to push it away but it was too late, Hunter saw his reaction and pulled back.

Refusing to let his fear stop them, Anemone grabbed his mate before he could get off the bed. Forcing Hunter to lay on his back, Anemone straddled the man’s hips. “Please don’t leave.”

Hunter placed one hand on Anemone’s hip, holding him still. The other hand went to his face, the man’s palm covering the left side of his jaw. “We talked about this, beauty.”

Before Hunter could say anything more Anemone interrupted him. “Wait. Let me talk. You’re right we did talk about this and at the time, you were right, I was just trying to prove something.”

Gods he prayed Hunter heard him this time. Anemone desperately wanted to be mated to this man in every way possible. To have what Vlad did to him stop that from happening might just destroy Anemone.

“But this time...” He reached out to touch those full lips with his fingertips. “This time I just want you.” Anemone shook his head. “No, that’s not it.”

Hunter gave him a wicked smile. “I’d like to see that sometime.”

All the blood in Anemone’s body went straight to his cock. “Oh Gods,” he groaned out. “Please, I can’t deny to still having some trouble with what happened to me but I want to be mated to you more than I want my next breath.”

The hand at his jaw, slid to the back of Anemone’s neck, as Hunter pulled him down so their lips were a breath apart. Hunter stared into Anemone’s eyes as if he were looking directly into Anemone’s soul. “I love you, beauty.”

Anemone melted. “I love you too.”

He lowered his head so their mouths touched. 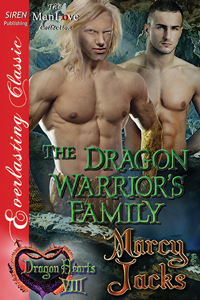