It’s autumn, and Jack is on his way home to the reservation he ran away from as a young man. But instead of palettes of coloured leaves drifting lazily to the ground, it’s snowing, cold, and dreary, and mirroring the feelings in his guts.

A yearly summons to join the family hunt camp is tinted with concerns about the health of his beloved grandfather. So Jack must head back, back to his beginnings, and everything he has ever tried to forget.

But this time, something is waiting for him. Something sinister and terrifying is lurking in the woods. This time, will Jack be the hunter—or will he be the prey? 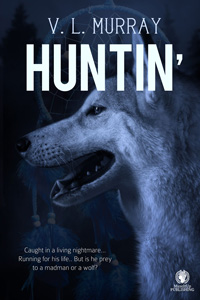 Edward Janvier stood looking out the window of the double-wide trailer. It was late, and darkness, aided by the grey clouds of autumn, had begun to creep across the sky an hour earlier. There was a chill in the twilight air.

Flora felt him shiver as she placed an old brown cardigan gently over her husband’s shoulders. “He’ll be here soon, my honey.” Flora raised her eyebrows as she spoke and shook her head a little. Jack’s father had been standing in the same place for almost an hour, and she was getting tired of watching him.

“Just looking for wolves. It’s getting dark. Don’t want him to get eaten before he gets in the door.” His gaze remained focused on the ever-darkening sky.

Barely five minutes later, a car pulled into the yard. Jack was home. Flora’s deep brown eyes watched as her son shook himself quickly out of his father’s embrace and leaned toward her, brushing her cheek with his lips. She could feel the cold of winter on his mouth and cheeks, and the cold of emotion from his heart. His detachment hurt her soul. It seemed like just yesterday he had been a chubby, bouncy, smiling boy, full of energy and life, who never wanted to be away from his family and home. She smiled as memories of Jack’s youth trickled forth from her mind—Jack with his brothers playing lacrosse in the yard, swimming in the creek with his friends in the natural pool created by a beaver dam, tracking animals in the forest with her dad, trying to remain stoic at the funeral of her mother. Things had changed after that. He had been twelve the year the old woman died. The next semester of school involved bussing the children to another town. There were more white kids there, and more trouble. Things had gone downhill from then on.

Flora breathed a deep sigh. Jack glanced toward her. She smiled, trying not to look worried, but it would be difficult to maintain the facade. There were so many things going on in their lives now, from concerns about money to her father’s peculiar behaviour and health.

A wolf howled in the distance. The hair on the back of her neck flickered upward as a shiver rippled down her spine. So many wolves close by these days. Were they hungry or attempting to tell her something?