Hyrruld Warriors 2: Into the Abyss (LoveXtreme) 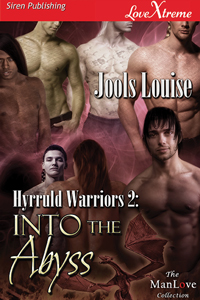 Hyrruld Warriors 2: Into the Abyss (LoveXtreme)

Heat Rating: Sextreme
Word Count: 39,580
4 Ratings (4.0)
Menage a Trois/Quatre Paranormal Shape-shifter Alternative (M/M, Gay) Futuristic
In Bookshelf
In Cart
In Wish List
Available formats
ePub
HTML
Mobi
PDF
Cover Art by Harris Channing
Reviews
I read book 1 and despite having some issues with the series, I wanted to see where it would go. I must admit, I'm fairly disappointed. The story was more of a comedy than a drama, which was very jolting. Max and his men were in such a serious predicament, I wanted to learn more about it. I wanted the men to take it and themselves seriously and they just....didn't. Lots of jokes and quips as if they hardly had a care in the world. There were a couple of moments of real, intense emotion and I loved it! But those were rare. Most of the time it was back to the jokes. I don't mind a bit of levity here and there but ...I'm just not sure what tone the author was was going for. As I said, this read more like a comedy to me and I was looking for something more suspenseful and dramatic.
SoCalReader
Read more...

Hyrruld Warriors 1: Through the Tapestry (LoveXtreme)
Jools Louise
In Shelf
$4.99

Hyrruld Warriors 2: Into the Abyss (LoveXtreme)
Jools Louise
In Shelf
$4.99

Max knew it was time to continue building alliances. An army was what he needed. His uncle Syrrus and an arch-enemy of his father’s, Trophus, were merciless and brutal foes. Trophus was one not to be underestimated. Max’s mother had been viciously tortured before her death. His father was poisoned in a treacherous act of cowardice by his own brother, at the command of Trophus. Max yearned to return to his homeland, an impossible dream right now. The instant he made the return journey through the Dimensional Tapestry, his enemies would take grim delight in murdering his mates, his children, and him. Not necessarily in that order. He imagined they would torture with vicious glee anyone he cared for, just for kicks. Keeping the Tapestry closed was their only hope. But he needed to begin taking action. He needed to renew their quest to achieve their ultimate goal.

Keeping his offspring safe after their birth had been a priority. It still was. If this Abyss was the means to that end, nothing would stop Max from finding the place. In order to save his children, Max would gladly give his own life for theirs.

“Myre, it is time to move.” Max and his alpha dragon Sol sat together in the early evening discussing matters of importance.

Myre was a friend, the ruler of Agion and they had an interesting relationship with the giant feline shifter. Despite the serious nature of what they discussed, they often bantered among themselves since it was impossible to resist teasing Myre, easing tensions as they came up with plans to secure their future.

The rest of his bonded dragon pod sat nearby listening intently. Neea, Myre’s mate had volunteered to corral both broods of youngsters. Max had been a little concerned at first, then he remembered this was Neea. The feline shifter put the goose in goose bumps when it came to instilling fear and order in everyone she met. His little monsters very seldom dared to cross her. When they did, their little scaly butts caught the sharp edge of her claws and the even sharper edge to her tongue. No wonder Myre spent a lot of time hunting!

“I hunt because it is necessary to provide for my family.” Myre gave Max an offended look, obviously having trespassed into Max’s thoughts again.

Max snorted in amusement, grinning widely. His golden eyes swirled with a mix of gold and black, his navy hair bouncing around his face as he shook his head at his friend.

“Myre, your mate is taking care of all our children. Tell me that female is not the baddest feline in this galaxy!” Max retorted, chuckling as Myre curled his lip. “And stop listening in to my thoughts!”

“Myre believes he is the baddest feline.” Raven entered the discussion with a certain amount of disdain for the fearsome leader of Agion. In reality they all knew Myre was a force to be reckoned with, it was just Myre’s mate was just a little more so.

“Maybe another flying lesson is in order, do you think?” Jayde asked innocently, laughing out loud at Myre’s snarl. The over-large panther shifter certainly did not like being reminded of his fear of heights. Jayde, on the other hand, made every effort to do so. It really was his pleasure.

“Perhaps your green-haired reptile would like to visit our Zorga exhibit. I’ve heard they’ll dine on anything,” Myre threatened, glaring at Jayde, blue eyes sparkling brightly in his darkly tanned face.

“Oh please. His butt is far too tough for one of those flesh-eating slugs. They’d just get indigestion!” Ochre interrupted, grinning as Jayde yelped in protest and flipped him off. Ochre and Jayde had grown up together after Ochre had been orphaned as a youngster. He and Jayde loved each other, and had trained together on Vexxillon as young dragon knaves. Now both were proud to carry the mating tattoo of their beloved liege, King Maxos, their teasing light-hearted and full of affection.

“He’d probably think Jayde too small to bother with. The guy is a little puny, don’t you think?” Indigo got in his dig, too, causing the gathering to erupt in delighted laughter since Jayde was certainly not small in any of his forms. In human form they were over six and a half feet tall. As dragons they were as large as an average-sized dwelling. The problem was, on Agion, most of the creatures who inhabited the planet made the dragons look like miniatures. Especially the giant Zorga who were predatory slug-like creatures that literally inhaled their prey before digesting them over several years.

“I think it’s time we paid a visit to your neighbours on Accorx.” Max waited until the laughter had died down and everyone had settled again before continuing the discussion. This was a serious subject, but he loved the banter. Their escape from the Hyrruld system had been perilous enough and he had shed many tears over the loss of his family, friends, and the destruction of his home. He knew that soon the deadly game would begin again. He had felt the darkness beyond the Tapestry, warning him that the darker magicks were growing stronger as the threads of the Tapestry were tested for weakness. But he couldn’t begrudge his mates a few moments of light-hearted banter. Seeing his lovers happy warmed his heart. He ached for a time when they could be happy without the threat of Trophus and his minions always looming.

“Trophus will be dealt with, King Maxos.” Myre spoke emphatically, now deadly serious and using Max’s title respectfully. “I agree it is time to forge new alliances within this dimension. The darkness is getting stronger. I feel the invisible tugs on the Tapestry threads. Your enemies grow bolder. Should they breach the Tapestry before we are ready I fear it would be catastrophic for my world. We are no match for an inter-galactic battle against the technology of your planet.”

Max breathed deeply, head thrown back joyfully as he felt Ochre’s large dick spread his chute wider and wider. Already filled with Shimmer’s equally large cock, Max panted as he was double-penetrated, feeling like his ass was about to split in two.

“Fuck that feels so tight! I don’t think I’m going to last.” Shimmer groaned, splayed out beneath Max like the most sumptuous feast. Silvery scales glinting and undulating beneath his skin as he writhed sensuously, the large dragon knight groaned again as Ochre’s large man-meat slid home, gliding against his dick, warm and moist and surrounded by Max’s snug, searing channel. Shimmer’s eyes of a startlingly bright orangey red gleamed like jewels in a face of stunning beauty. The thick muscles of his chest rippled like polished steel, his taut abs ripped and cut deeply like mini canyons along his lower torso. A thin smattering of silver hair trailed from his navel and met with a little tuft which sat just above the root of his massive cock. The same cock which was speared inside Max’s hungry ass. The same ass which was currently stretched to bursting by the twin monsters invading it, claiming it greedily.

“Stop talking and start fucking!” Max grunted, straddling Shimmer’s lap as Ochre knelt behind, withdrawing before spearing him again in a double fuck which brought all three to the very edge of release.

With a deep chuckle Ochre slapped Max’s rump, then squeezed lightly before he began to move in slow increments, thrusting in shallow strokes. Max and Shimmer yelled out, begging him to fuck them harder, but Ochre bided his time. A slow build-up, then on to the sizzling finale.

Ochre’s balls swung like pendulum as he shifted his hips back and forth, slapping against Max’s, their sweat soaked bodies rippling as they found their rhythm, the speed increasing as the large dragon shifter fucked his mates into the mattress.

Sighs and groans and moans filled the room, the smell of sex permeating the air like a heady perfume. Ochre grunted as he picked up the pace, eyes closing to slits at the feel of Shimmer’s sleek cock wedged against his, gliding slickly and adding to the eroticism of being surrounded by Max’s tight, searing tunnel. The sight of Max’s head thrown back in an agony of agonising bliss nearly had Ochre coming too soon, and he slowed his pace a fraction.

Max leant forward, his prick wedged between his and Shimmer’s abs, pressing his open mouth to the silver dragon’s and sealing their lips together in a hot, love-filled kiss which had them moaning and writhing against each other. His fingers roamed along his lover’s beautiful face, caressing the strong jaw and feeling the tangle of long silvery tresses as Shimmer’s unbound swathe of silken hair surrounded the warrior in a halo of gleaming softness.

“I want some of that!” Ochre protested, pushing forward so he was wedged even deeper, his height allowing him to keep fucking Max’s hole while at the same time sharing a three-way lip-lock, which got sloppy and sexy quickly. Whimpers and moans resounded as the kiss grew more intense. Their moves became more urgent, jerky and uncoordinated as their emotions collided along the bond, blending in a harmony of love and lust and blissful ecstasy.

Releasing himself from the kiss, Ochre chuckled, grasping Max’s slim hips before taking it up a notch.

The Omen, the Crow, and the Cat (MM)
Casper Graham
In Shelf
$4.99
Tweets by
sirenbookstrand