The holidays are a time for egg nog, Christmas carols, gift giving, and endless re-runs of classic movies on TV. A time for reflection, joy, and of course those inevitable holiday feuds. It is an occasion for spending time with your family . . . and outrageously sexy little elves who fulfill your wildest sexual fantasies.

I Believe is a story about passion and lust, but more than that, it is a story of hope and miracles and ultimately, belief in the enigmatic spirit of the holiday season. 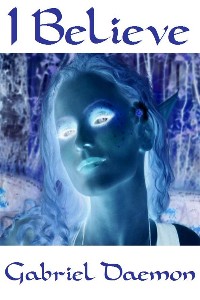 "A sexy, sweet holiday romp. That’s all it was and that was just right. Dave got a gift that helped him to heal and enough sex to sink the Navy. It was hot, kinky, naughty. And just right. Thank you, Gabriel. This was just what I needed."

“Oh, I feel loads better!” declared Trish as we headed out of Constantine’s. Impulsively, she jumped onto the short, snow-covered railing alongside the steps and slid down to the ground. She giggled, slapping snow off her taut round butt before dancing across the slush-covered parking lot.

“I think I ate too much,” I grumbled, rubbing my stomach.

Trish jogged up to me and gave me a sympathetic look, touching my abdomen. “Aw, poor baby. Too much in the tummy?” she asked with a pout.

Her eyes lit up. “Hey! It’s been more than fifteen minutes!” She leapt into my arms, wrapping her little arms and legs around me. Softly, affectionately, she kissed my lips, little sucking pecks amid gentle murmurs that brought life back to my erection. I settled my hands on her snow-dampened behind.

“Mmm,” she moaned gently, pulling her face back. She rubbed the tip of her button nose against mine.

“So what do you want to do now?” I asked her, testing the waters by gently kneading her firm cheeks.

Trish bit her lip and squeezed me with her thighs. “Hmm,” she contemplated, looking around. She noticed the meandering paths of the nearby park, with its snow-covered trees and bushes. Street lamps and park lights did well to give the snowy glade a bright, crystalline look, while the still air allowed occasional flakes to make their meandering way to the ground. “Let’s go in there.”

Sounded like a plan to me. I headed away from the car and toward the park, keeping Trish tight against me. She gave me no indication she wanted to be set down.

“Oh, this is so romantic,” sighed Trish, looking around. The thick layers of snow upon the bushes and tree limbs gave our surroundings a soft, pale glow. It was like an Arctic version of the Garden of Eden. The air was still and crisp, but despite the cold, Trish’s body heat was keeping me comfortable. Or maybe I was just so turned on that I didn’t notice the chill.

“Yes, it is,” I agreed, stopping to give her a soft kiss. Trish grinned, kissing me back with all the eagerness - and then some - expected from a first date which had gone well. I wandered along one of the winding trails, walking slowly and just enjoying the feel of Trish’s warm, tiny body against mine and the soft kisses she gave my lips, chin, and neck. I shivered with pleasure when her darting tongue tickled my ear. That had always been a serious erogenous zone for me. My penis bulged in my jeans, seeking the source of the heat between Trish’s legs.

“So,” she whispered at last, peppermint breath warm upon my face. “Ready for dessert?”

Only an idiot would not have known what she meant. My arousal flared, burning against the wall of natural anxiety. “Here?”