If the Spirit Is Willing (MM)

When Martin Provost comes out to his family, his parents accept him but, surprisingly, his twin sister does not. On his way home, Martin’s car is hit by a truck that crosses into his lane. He survives the accident, but barely -- he is unresponsive.

Anthony Carsen is a widower trying to deal with his partner’s suicide. He lives near the scene of Martin’s accident and rushes to help, though he thinks he might be too late.

Though Martin’s body is in a coma, his spirit is drawn to Anthony, and soon the two fall in love. But Martin’s isn’t the only presence in Anthony’s home, and soon other spirits make their presences known.

Martin isn’t dead, but his life is fading fast. Can Anthony convince his spirit to return to his body? Will Anthony’s late partner leave him and Martin in peace to pursue their love? If the spirit is willing ... 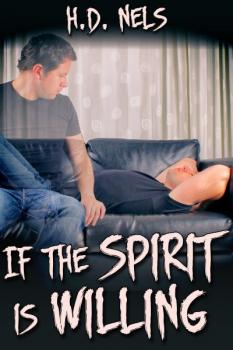 If the Spirit Is Willing (MM)

Anthony decided to make a cup of hot chocolate before heading to bed. He put the kettle on. In the mug, he added the cocoa powder with a bit of milk, mixing it into a thick paste. When the water boiled, he slowly poured it until he had a rich, creamy drink. He walked down the main hallway towards the porch and nearly dropped his beverage when he stopped suddenly. On his deacon’s bench the air shimmered and appeared almost translucent. He stood still, listening, but the only sounds were the wind through the trees outside and a far off fog horn. He decided it was his overactive imagination on top of all the activities of the day. He went back to the living room, sipped his hot chocolate, and tried to slow his thoughts. When he was finished, he walked once more down the hallway where everything appeared as it should be. So he turned and went to bed.

Unlike most of his dreams since he found Jason in the garage, this one was about the driver of the wrecked car. In the dream, the man opened his eyes as Anthony approached the car, and despite his terrible injuries, he flashed a beautiful smile. He was bleeding and had to be in pain, but he seemed to take comfort in looking at his would-be rescuer. The man’s lips moved and Anthony leaned in through the broken window to get close enough to hear him. The voice was soft but not strained, and there was no indication of pain in his tone.

“I’m Martin. You’re going to save my life.” In his dream, Anthony didn’t even try to make sense of what he just heard, he accepted that it would happen and he would figure out the rest later. He nodded at the injured man, just as his eyes slowly closed, and his breathing seemed to stop.

Anthony sat up with a start. He checked the clock, and saw that it was three A.M. He decided that maybe a cup of chamomile tea might help him relax enough to get back to sleep. That had been Jason’s way to deal with insomnia. Not that Anthony was an insomniac, he’d woken and didn’t feel tired, nor did he feel rested. He made his way down to the kitchen, got his tea brewed, and decided to take it on the porch to check out the night sky. As he walked down the hall, he saw the air shimmering once again on the deacon’s bench. It was at the same place where he saw it earlier. He watched as it seemed to coalesce into a vaguely human shape, but without any distinct features. Earlier, he had been startled when he saw it. Now, he felt curious but not afraid. His brain tried to make sense of it as enquiring minds often tend to do. By now, enough of the shimmering air had taken on a form of an adult male. At this point, Anthony’s resolve utterly retreated, and his heart began pounding.

“I don’t believe in ghosts. This can’t be real. Jason, you chose to leave me, you can’t come back to haunt me.” He turned and hurried back to his room.

The Dragon, His Omega, and a Stalker (MM)
Marcy Jacks
In Shelf
$4.50
Tweets by
sirenbookstrand