His name stands for sadism, sex and slavery…everything that wealthy socialite Emily Sheffield has wanted from a man, since she first read his sordid story in "Uncle Tom's Cabin."

When she sees Simon Legree after the Civil War, playing himself on stage, she decides she has to have him for herself. And when she meets him again performing in a flogging brothel, she is ready to buy what she wants…her right to be his secret, submissive sex slave. His price includes her hand in marriage, which turns the former plantation owner into a rich robber baron.

Now he'll have everything he ever wanted…if only he can forget his passion for Cassy, the world's least submissive slave girl…and escape the vengeance of Uncle Tom's son. Soon the Great Chicago Fire will bring them all together, in some very surprising ways, as they finally learn the startling truth about The Real Simon Legree. 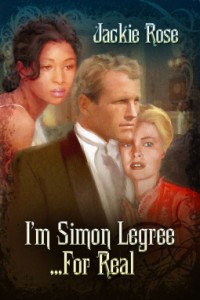 You'll know how well we were doing when I tell you that Madame could not afford to spare me for so much as one performance, even when a patron offered one thousand dollars for a private session. Instead, she opened the small side room on Monday night, which was our usual evening of rest.
Strategically located across the marble entrance hall from the main salon, it was a scaled-down version that was well suited for such intimate encounters. Painted in a rich lapis blue, the domed ceiling was dotted with gilded stars above the gracefully curved, quilted sky-blue velvet love seat. With no room for a grand piano, we still had a violinist playing everyone's favorite romantic tunes, starting with 'I Dream of Jeannie'.
In this intimate setting, I thought it would be embarrassing to show up in costume. Madame assured me, though, that the client wanted to see The Real Simon Legree, wearing his palmetto hat and gleaming black knee boots while wielding his riding crop.
My client, by contrast, was dressed in the modern fashion: a bright pink silk with black bows adorning the bustle. Her floral fragrance was so faint and subtle, I knew it was just as expensive as her gown. Of course, I was surprised to learn that a lady had hired me, since usually it was the men who wanted to play out these scenes in private.
I was less amazed when I recognized her, as the elfish little creature I had often seen staring at me in the theater. I would have called her a gnome-ish creature, but anyone who was giving us one thousand dollars had earned a more flattering description.
Well, money could buy anything, right enough. It had purchased Cassy for me, and was now providing me for this customer. There seemed a certain justice in it.
Already, she had given me a way to start the conversation. Even though she seemed content to gaze in fascination at me, I thought that I should say something to earn my four-hundred-dollar share of the fee she had paid to spend an evening with me.