I'm the Muse of X-Rated Romance

Things get even wilder when Mr. Muse forces her to act out his scenes with him and his handsome apprentice, who boasts a very broad chest covered with equally vulgar t-shirts. But when a wealthy publisher offers to print her sweet historical romance instead…and the nice Muse of History pops up at a city council meeting in order to help her…while her sister Muse of Comedy won’t stop laughing at her own awful jokes…then what’s a girl to do, especially when she realizes that she enjoys it all? 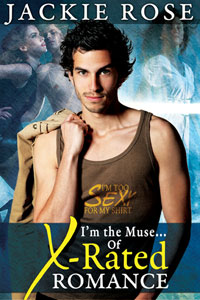 I'm the Muse of X-Rated Romance

Mr. Muse threw the cracked vinyl cushions to the ground and pulled the bed out from under the sofa with one strong tug. Then he picked her up and threw her onto it. Desperately, she struggled against him, pounding her fists against his broad, hard chest.

“Will you cut that out?” he demanded. “This is not a rape scene, it’s strictly consensual.”

“Well, whatever it is, it is just a fantasy. So you can relax and enjoy it. Unless you really do want us to leave you alone with your trite and boring story that has been done a hundred times before.”

She thought about that for a long moment as the two men waited expectantly. “Well, since you put it that way…and since it is only a fantasy…Oh!”

As he jumped onto the couch and pushed her beneath him, she was too stunned to resist. In fact, she admitted to herself, she didn’t really want to, especially since it was just a fantasy, after all. To the contrary, she felt herself writhing eagerly as he pulled her skirt to her waist, dragged down her cotton panties and tossed them to the floor.

Holding her down with one hand, he used the other to lower his own shabby trousers and toss them aside. Using his own thighs to spread her legs far apart, he pressed himself deep into her, pulled himself out and thrust himself in again. His organ was as thick, long and hard as she could ever have imagined, even in a fantasy like this.

It really is just a fantasy, she assured herself, as her arms reached out to embrace him and her entire body responded to his assault. Her hips were moving backward and forward, faster and faster, as though they had a mind of their own. They pulled him deeper and deeper inside her, as every thrust made her warmer and wetter inside.

When his firm, full lips pressed against hers, she closed her eyes in rapture as her own frantic kisses answered his. As they embraced, she rose to her climax before falling back to Earth again.

But no one could blame me for reacting this way, she told herself, as she lay back, sighing with contentment beside him. It is just a fantasy, after all.