“As much as I’d love to help you through this, I can’t.” Iyanna looped her arms around her shoulders and hugged her. “There are certain things in life we have to do alone. This, in a sense, is one of them. I’m here for you, but in the end, this is something you have to decide on. He will have to too. That’s the way it’s works.”

“And if our families can’t handle it?” Sunny’s eyes widened at her words. Her gaze flying up to her sister’s. “I mean, if he happens to belong to another race.”

Solana Dorian knew who her divine mate was, had for centuries. Now the time had come for her to make a decision. Accept him, even if it caused a rift within her family, or walk away.

Centuries of patiently waiting for Sunny to grow up weighed on Bentley D’Lyons’ nerves. He refused to pressure her, yet at the same time wished she’d hurry up. Could he handle many more decades of her not accepting him completely? 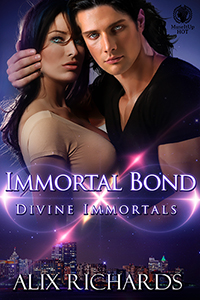 “I know for a fact, none of the boys have told her about their sex lives. Does she know they’re having it? Yes, she does. Unless they bring it to her attention it’s none of her business.”

“Or something happens to change that.” She nodded absently.

“True. As long as their actions aren’t vile, she leaves it alone.”

Everyone in their family knew what happened, it wasn’t a secret although no one spoke of it. When dealing with jealousy and greed, it reminded them of what could transpire in any race.

Sunny bit her bottom lip. “So what do the dreams have to do with Twin Flames?” She decided changing the subject was safer. “Do they have anything to do with it?”

“You said they involved one certain male?”

“Yes. The male is always the same, even when I’m with another.” She heaved a sigh. This was annoying.

“So, they don’t stop when you are in a relationship?” Iyanna’s eyebrows disappeared.

“Nope. If anything they get more insistent.” She shook her head and slumped back in the chair. “I can understand them attacking me when I’m in between men, but while I’m happily involved?” She groaned and closed her eyes. “That’s what I don’t understand. You hear about women dreaming when they’re lonely, but when attached?” She opened her eyes and made a face. “It doesn’t make sense, Yanna.”

Not what Sunny wanted to hear right now.

“Sorry.” She held a hand up and covered the grin with the other.

“You’re not sorry.” Sunny growled and sat upright. “If you were you wouldn’t be laughing, you’d be helping me comprehend this. It’s not funny!”

“Actually, it is.” Her elder sister breathed in, held it, closed her eyes, and released what she held. “Okay.” She waved a hand in front of her face and her expression changed. All joviality left, leaving behind a seriousness she was accustomed to seeing on Iyanna’s features. “You can be extremely happy with a relationship and if your Twin Flame is close enough, the bond between you can be triggered.”

That wasn’t what she wanted to hear. She slumped back in the chair, her jaw slack, eyes focused on the delicate woodwork of the desk trim. She’d hoped Iyanna could discount her concerns, not feed them.

“Let me explain.” Her sister leaned toward her and lifted her chin with gentle fingers. Her expression was one of understanding. “Twin Flames are connected on the Soul level, first. From there everything falls into place for the meeting and linking in the physical world. Dreams are common between two divinely matched. It’s actually expected. One of those ‘signs’ you could say. Some call them shared dreams, while others refer to them as visions of events to come.”

“So I’m dreaming about him?”

“I’d say he’s dreaming about you to.” Iyanna released her chin and brushed loose strands off her face before tapping the tip of her nose with a finger. Sunny scowled at the action, her sister smiled. “Both of you dream about each other. He could be satisfied with his present life. He’ll still yearn for you, his flame mate.”

“No matter how happy we may be, we’ll still desire them?”

“Yes, you will.” Her sister sat back and sighed. “We’ve lost the smaller particulars, but we have the main. They are us. They match us in every manner and way. Our flame mate is the only person in the world who knows us completely. It’s not easy to explain with words.”

“What do the dreams mean?” Sunny shoved out of the chair, she couldn’t sit still any longer. She paced across to the wide glass wall that overlooked the empty dance floor below. “Is he real, living and breathing in this lifetime? What?” She ground her teeth. Maybe she should just tell Iyanna who the male was.

“Honey…” Her sister touched her shoulder. She hadn’t heard her move. “I’m going to guess you already know who he is.” Iyanna turned her around. “No, I’m not asking you to share that with me, unless you want to. What I’ve learned over the centuries about Twin Flames is what you’re describing, that’s what this is. You know who he is and he knows who you are.”

Sunny dipped her head. She couldn’t keep looking at her eldest sister without giving away that she did know him. But she didn’t know one hundred percent if he was her flame mate.

“Listen.” Iyanna ducked to look her in the eye. “You know the Laws. This is between you and him, no one else. Don’t over think it, that’s what causes problems between mates and complicates an already delicate issue.”

“Any other advice?” She glanced up and uncrossed her arms.

“As much as I’d love to help you through this, I can’t.” Iyanna looped her arms around her shoulders and hugged her. “There are certain things in life we have to do alone. This, in a sense, is one of them. I’m here for you, but in the end, this is something you have to decide on. He will have to also. That’s the way it’s works.”

“And if our families can’t handle it?” Sunny opened her eyes wide, her gaze flying up to her sister’s. “I mean, if he happens to belong to another race.”

The corners of Iyanna’s lips tilted up as she stepped back after a quick squeeze.

“If he is human, well, you’ll have to decide how to proceed. If he’s Delphian, Eudorian, or Calanthian, they know the Laws.” Her sister’s fingers gripped her shoulders before releasing her and stepping away. “There are reasons for everything, Sunny. That includes the mix of bloodlines and genetics. Unconditional acceptance and love is what Twin Flames are. Not just for each other, but for everyone. They are the ones who heal the world’s wounds.”

What her sister said made sense, then again, none of them had faced that possibility.

A Sweet Deal for Karen (MFM)
Morgan Henry
In Shelf
$4.99
Tweets by
sirenbookstrand