When Hades, the God of Death is tricked into throwing a Halloween party, he has no idea that he’ll meet the woman of his dreams. But winning over Maxine Rhodes may prove difficult. She’s already been burned once by a god and has no desire to try again.

Maxine learned her lesson not that long ago that the gods can’t be trusted. So when a friend badgers her into going to a party, the last thing she wants is to fall for another god. Can Maxine overcome her past to love again? Or will old wounds break both their hearts? 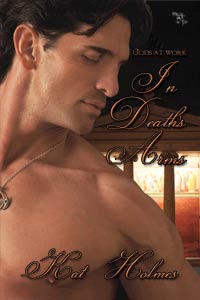 How in the hell did she talk me into wearing this?

Maxine looked at herself in the mirror in horror. She couldn’t believe what she saw. Gia was so going to pay for this. It was too late now to get a new costume. Her so-called friend would be arriving in an hour to pick her up for the Halloween party. But oh how she wanted to hide and never let anyone see her.

Thank heavens that her brother and Heather hadn’t seen her in this costume when they’d arrived to pick Sophie up for the night. She’d never have lived it down. Damn Gia to hell for this!

Sophie came down with an earache the day before when she was supposed to go costume shopping with Gia. Maxine had been forced to cancel in order to take her daughter to the doctor. Gia had said she’d go ahead and pick up a costume for her since she couldn’t go herself. Maxine had told her that under no circumstances was she to get her a harem costume and Gia had agreed to that.

I should have added more items to the list! She thought in disgust.