In From the Cold

Mari loves men who are intimately communicating with the Grim Reaper, like her only mountain neighbor, ninety-plus year old Hector. Twelve years and now she's enjoying her solitude, till Hector ups and dies.

He leaves everything to her, with one stipulation...she must sell his cabin to collect her inheritance.

Determined to keep her world testosterone free she commands her real estate agent to not even show the curmudgeon's cabin to anyone under the age of sixty-five.

Mari must leave for her son's wedding in the mid west for one month. Necessity requires she sign temporary power of attorney for a possible quick sale over to her real estate agent. A bad, but necessary move.

He's moving in and her son's age with rippling muscles, and far too much testosterone. All summer, Mari hunkers inside and drools.

Determined to make this stop, she sees only one solution...jump his bones, do the deed and get the annoying SOB out of her system once and for all.

Like most well designed plans, something always happens to blow them to smithereens, and now, three agonizing days later, a huge blizzard is about to hit the mountain, isolating the two cabins from the outside world...Oh Dear! 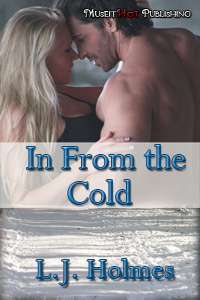 In From the Cold

“Don’t you give me that, ‘I’m just an innocent bystander’ look!” Mari reproved Timp. “You lie there, like the Queen of all Egypt, after allowing the enemy to caress your head. Slut cat! I’ve half a mind not to give you tonight’s Fancy Lioness Cuisine, and it was your favorite—salmon in tuna giblets.”

“It’s gonna take more than that weak-assed apology to get you out of hot water with me, you little turncoat. You let him touch you!” Mari whimpered. “How could you?”

She was jealous, but she wasn’t sure of whom. Was she jealous that Timp had not retained her aloof loyalty, or was she jealous because his fingers, those long, supple, temporarily frost bitten, fingers, had smoothed over Timp’s luxurious fur? How could she possibly be jealous of her own cat?

“I shouldn’t have opened the door, Timp. I know he threatened to kick the door down, but he is a judge. Surely he wouldn’t have actually committed such a felony, would he?” Mari hypothesized. But would he issue an idol threat?

She wished she understood men better, or at the very least him.

“Stop glaring at me. I know you’re thinking I know him better than I should, and you’re absolutely right. But, knowing what makes his d%*k rise is not the same thing as understanding what makes him tick. Oh Timp, do you think he’s here to put me under house arrest, until the weather clears and he can get a sheriff out here to serve me with the warrant?”

Mari did not want to believe that, but she wasn’t dumb enough to think someone as high up on the food chain, as Elliot Blakely, didn’t know how to prepare for a winter blast. He had to have people who could teach him all that he’d needed to do, no matter how used to having maintenance people he might be. He could direct his buddies in the Sheriff’s department, all of them to go out and buy all the stock he’d needed. As a judge he enjoyed all manner of privilege.

“So he’s here to guarantee the Sheriff’s entry and my imminent arrest. What now? Am I supposed to act like a scared and timid rabbit caught in the fox hole?” she asked. “Not going to happen!” Mari avowed. She’d survived worse; she’d survive this. “You may have to move out west and live with Cole and Ellie, though.” Her daughter, who lived closer, rented a small apartment off campus and already had the older cat the Donovan family had raised from babyhood. Katlyn’s landlord would not allow more than one pet to live with her, so it had to be Cole and Ellie. “I’m not sure how you and Horse,” Ellie’s oversized hound dog, “will get along long-term, but if I’m in jail, you’re going to have to move out there and curtail your swat and retreat campaigns. All Horse would have to do to get even is sit on you,” Mari warned.

The sound of the water flipping off made Mari jump back to her feet and scurry into the kitchen. She’d promised a bowl of stew. Maybe if she fed him, and set him up on the sofa bed, he’d mellow over the next few hours and rescind the arrest warrant.
By the time she heard him moving around the bedroom, Mari had buttered, cheesed, garlic-sprinkled, and broiled a hunk of Italian bread; she even added a crisp iceberg lettuce, tomato and onion salad to the menu. If you feed a man well, they’ll invariably fall asleep soon afterward, or at least her ex-husband had.

Zakia and the Cowboy
Lorraine Nelson
In Shelf
$3.99
Tweets by
sirenbookstrand