In His Alien Hands

Sex with a water warrior takes the word 'wet' to a whole new level!

Arax, leader of the water warriors, strives to save the life of a foul-mouthed, annoying shrew who is dying in his arms. The human female's injuries are so fierce there is no hope for her unless they put her in a healing machine that's never before been used on a human. The machine causes irreversible side effects, and now Arax needs help taking care of the female he feels responsible for. He's left with no alternative but to go to dead Earth and hope he can salvage another human. As luck would have it a drowning vessel might just carry his salvation, and a new chance at finding love. If Meadow will have Arax, and if he can keep both females safe from a terror that lurks within the waters of his world.

Trace of Humanity by Juliet Cardin

The fate of humanity rests with him.

Alien sleeper cells on Earth are awakened when invaders threaten the planet. For thousands of years Sentinels have walked among us, awaiting the moment they would be called into action. Josie's boyfriend Bane is a Sentinel. Instantly, he becomes a cold-hearted, single-focused machine, bent on ensuring humanity's survival. Josie barely recognizes the man she once knew. Though Bane is determined to protect Josie and secure the small town they escaped to, she can't help but look upon him with trepidation and suspicion. She wonders if Bane is really intent on keeping her and the others alive, or if he's actually the real threat they face. 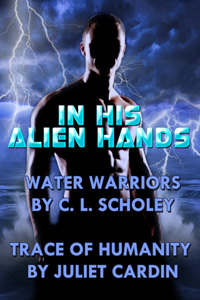 In His Alien Hands

The humming of the healing machine raced along with Arax's emotions. The device seemed to take forever, creating odd sounds neither had ever heard before. Arax and the healer exchanged worried glances. If the human had different organs than his species, the machine might remove them, or add new organs she would have no use for. She could end up with fins, gills, or mutations to adapt to their world the likes no one had ever seen. Or, depending on human origin, she could become an atom or a tiny microorganism.

Arax grew concerned with each second that passed. Anything could be happening to her. If the machine was to guess what action to take and patch-quilted her body back together, she could be healed but still hideous to gaze upon. Arms and legs might deform or be disposed of. Worried he may have placed her into a position where death might be more welcome, Arax was tempted to stop the procedure.

"Why is it taking so long?" Arax demanded.

"She's human. Her features are distorted compared to us. The machine might be fusing her baby finger to the finger beside it like ours, or rearranging her toes into the three we have. The machine isn't an exact science when dealing with other species. It may treat her as though she were the plague and rearrange her molecules. Anything could be happening. She could end up with a tail, or no nose and no eyes. The machine might not be able to decide if she's in water form or if she's humanoid."

Arax was aghast the healer had said aloud his own fears. Finally, the chamber settled down. The door lifted, expelling a huge amount of smoky, black vapor Arax had never seen before. Both he and the healer waved their hands in front of them, dispelling the gas. For a moment all Arax saw was an unsightly pile of mangled clothes. Normally the chamber was entered into nude, but there hadn't been time to strip her. It appeared the machine had attacked the clothing, sensing it as noxious and harmful. His heart fell at the sight; the female might also have been shredded.

Arax took a deep breath, looked into the machine, and then stumbled back in stunned surprise. "What the hell?"

"I was afraid of this," the healer mumbled.

"Oh no. What do we do?" Arax said, fighting the building panic.

"The question is what will you do?"

The female was alive, and she began to cry. Huge tears slipped from big green eyes fastened onto Arax. He ran a quick hand over his face in dread.

I did this. It's my fault. Poor little female. What have I done?

"For now we will tell the council she died." Arax leveled a grim, hard look onto the healer. "Not a word, do you understand? Not a single word to anyone."

The healer was as grim as Arax when he nodded.

"Bane?" You better be home. In the living room she saw Markley perched at the window, staring outside, his tail swishing back and forth. "Where's Daddy, baby?"

A noise down the hall got her attention. Josie practically ran down the hallway and flung open the bathroom door.

There, standing in front of the mirror, was Bane. She barely recognized him at first. He'd shaved his head. She caught sight of his eyes watching her in the mirror. They were cold. When he turned around she said, "Did you see…outside?"

"Yeah." He stared at her grimly and answered in a hard voice. "It's begun."

Bane was in shock—that must be it. Why else would he shave off all those dark curls she loved so much? Not that he looked bad. Just different.

Josie moved back against the wall as Bane stalked past her. He paused before the giant closet doors in the hallway and slid them open. Reaching up over his head, he pulled down a large duffle bag and tossed it onto the floor at Josie's feet.

"Pack only necessities. We travel light," he said.

"What? Where are we going?"

"Somewhere safe. The city is compromised."

Josie stared at the bag. Bane pulled out his camping backpack—an on-going joke between them since he'd never camped—and strode past her into the bedroom. She picked up the duffle bag and followed him. He pulled open drawers and began tossing in clothes and items from atop the dresser.

"We can't just leave," she told him. "I have work tomorrow. And what about your book? And Markley?"

"You're not going to work tomorrow. Forget the book and the cat too." Bane marched over and picked her bag off the floor and tossed it onto the bed. "Pack your shit or I'll pack it for you."

Forget his book? "Why are you acting this way?" It was as if his entire personality had changed. The man standing before her was not the Bane she knew. She didn't want to know this man. Had the UFO affected him so badly? She knew fear did strange things to people.

Bane ignored her while pitching some of her clothes and toiletries into the duffle bag. He stuffed a blanket in as well and then picked up both bags and headed past her. Josie followed him and watched him rifle through the kitchen cupboards. He packed a frying pan, small pot, and some cooking and eating utensils along with a few sharp knives.

This was really happening. He was determined they were going to leave. Maybe she was the one with something wrong with her? Should she be taking this more seriously? Was it really an invasion?

She walked over to the window and stroked Markley's fur. The UFO still hovered in the sky. It was getting darker out, which made the thing appear even more sinister. It hadn't moved, and she didn't see any more of them. Perhaps it was friendly? Maybe just here for a visit?

She could see the army had arrived and was making its presence known. Helicopters darted around in the sky, though not too close to the spaceship. Military vehicles were all over the streets in addition to soldiers. This was some serious shit.

If Bane thought it best they leave, then fine, they'd leave. But damned if she was going to leave her cat behind. She headed for the closet but stopped when she stepped on something hard, hurting her foot. They were already sore and aching from the trip home, not to mention her nylons were practically shredded.

What the hell? It was a ring. An engagement ring to be precise. She bent down and picked it up. She looked over at the kitchen and noticed the steaks marinating on the counter. Their second anniversary…had Bane planned on proposing to her tonight? She felt a lump in her throat. If it weren't for that damned UFO she and Bane would be celebrating right now.