Itana has always known she was something more than human. What? She wasn’t sure. Veris, an evil creature of darkness, has stalked her for that very being she’s afraid to acknowledge in herself. If she can continue to hide from Veris until her thirtieth birthday, she will be free of his torment forever. But what can she do when the thing she wants the most is the very thing that will bring her into his grasp?

Gershon, a born vampire of the Malistoan line, knows Itana is his soul mate. Unfortunately, Gershon’s attention opens Pandora’s Box. No longer are vampires at the top of the food chain. Gershon has no choice but to uncover Itana’s secrets and conquer them, or risk their very existence. 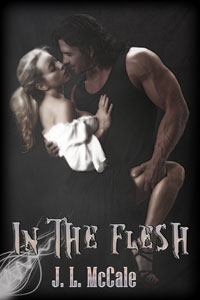 She turned, recognizing the voice instantly, but unwilling to accept who it belonged to. She’d just seen Gershon across the parking lot, but before she could speak, Gershon grabbed her. He pushed her against the wall, mouth moving closer, then pressing against hers. His lips were firm, demanding. His wicked tongue moved against her lips, passing through to touch the sensitive parts within.

Itana had been kissed many times in her life, but nothing compared with what Gershon did to her in that hallway. His body pressed against hers, one muscular thigh sliding between hers, spreading her while she felt his erection rub against her sensitive mound.

She tried to push against him, but he took both her small wrists in one of his hands, holding them above her head. His other hand rested against her rib cage just below her breasts and for a brief moment, she wished that hand would slide up and caress her breast through her shirt.

Gershon was sexy. From the first moment she’d met him, she wanted him. Now he was touching her, plundering her mouth in ways that made her thighs burn with desire. Every nerve ending came to life beneath his body and, for a minute, she didn’t care what the consequences were. She wanted this man inside her.

He must’ve wanted her as badly. Gershon hadn’t bothered dressing, rushing over some time after she’d waved. He wore a leather jacket, no shirt, jeans, and his hair was still wet from a shower.

His mouth broke from hers, kissing a trail down her throat, unbuttoning her shirt and indulging on the flesh beneath. He reached the top of her breasts, causing need to flow through her body. She never remembered craving a man so much, needing to feel those lips encompass her nipple.

“We can’t do this,” she whispered breathless, wishing there was some way to end the worry Veris created.

“Why not? You want me.” He said it as a statement of fact, never questioning her reaction. “Unlock the door. We don’t need to do this in the hallway.” Before she could protest, he took her soft flesh into his mouth, suckling her while one jean clad thigh rubbed against her.

He took the keys from her hand, unlocking the door and throwing it open. Then he looked at her, gaze going over her body and her thighs burned with a need she didn’t know was possible.

“I can be faithful. I promise you that. You’re the only one for me.”

“That’s not it.” He unbuttoned her shirt and tossed it into her apartment. One breast hung over the cup, the other still covered in black lace. “Please, you have to listen to me. I’m not like other girls. This can’t go anywhere.”

The lace-covered nipple was taut, and he dropped his lips to it, teasing her through the bra. She didn’t see him unfasten her pants, but felt it, heard the zipper slowly dropping until her black thong was visible.

“Don’t be afraid of me,” he whispered between breasts. “I’ve given you time, now give me the chance to win you. I don’t mind competing for your affections.”

“I’m not afraid of you. He’ll find me. Don’t you see?” She wasn’t making sense and she didn’t care. He felt too good. She tried again to find the words to convey her situation. If only her body didn’t throb with every touch. “Someone is after me. He tracks by scent. If I come, he might find me.”

That got his attention. He stopped, his mouth at her hipbone. “What?”