It is the flesh. The warmth of eternal lust...

In the backstreets of his drab city, Alex finds the perfect gift for his girlfriend, who misses her rural home. Invited into a world of staring portraits, he walks away with the cool gaze of a former rancher, forced to move to modernity.

At first, the gift is welcome. Those blue eyes stare out from a world of rural comfort, what Rachel misses and loves. But there is more behind the gaze, so much more, and slowly it spreads, infects their lives, wanting to break free of its painted milieu and into the real world.

The art gallery. So many frozen faces, all staring...

Sheila, the mistress of these paintings, captures the youth of long gone subjects, but for what purpose? Alex returns to her to relinquish his gift’s burden upon his home, his Rachel. And the mistress waits within these walls of paralysed eyes, soft whispers, and gentle murmurs that defy the prison of gilded picture frames. Trapped youth yearns for freedom. But Sheila’s lust knows no bounds.

As Alex and Rachel are pulled into her game, they learn the true secret behind her brush. The secret of the flesh.

The gifts of lust do not come cheap. There is a price, for mistress and subject alike... 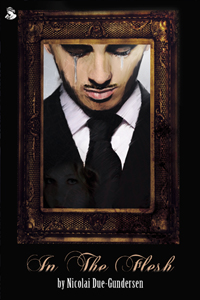 They stared at her with sudden, knowing triumph.

“He won’t return it,” Sheila declared. “I won’t let him return it.”

She ignored the eyes of the portraits and turned her gaze to the blank space on the wall. The cowboy’s absence had left a small void, a small calm, yet it granted little comfort. The eyes of young subjects followed her gait, enjoying her restlessness, watching her pace back and forth. She gave a silent prayer, wanting to see only emptiness; only the blank wall. Sheila knew the portraits were winning, eroding her will day by day. She had to get rid of them, had to turn one blank space into a void reflecting nothing. Only herself. Yet it was so hard, wasn’t it? The number of works she had to do to stay alive, followed by the amount she had to sell.

A sharp series of raps brought her pace to a dead stop. She stamped her feet in dreaded anticipation and stared at the door.

She went toward the wide windows.

A sigh of relief escaped her lips. Rain. Only rain, come a-tapping at her door, and—

The rapping grew louder; out of sync with the afternoon drizzle. Sheila frowned as she recognised the source. She whipped around and stared straight into the eyes of every portrait.

“The cowboy is gone,” she told them.

Again, the sharp rattling. The sound of restless subjects wanting to break forth from their frames.

“Stop!” She went to the nearest portrait; a boy with a head of golden brown. Her finger pressed down on his lips. “Silence.”

The boy’s eyes seemed to well with tears.

A brief sigh escaped from fragile lips, and then came the sound of a hundred little whispers. Angry. Hopeful. There was something in the way they behaved today, the way they stared at her, talked at her. She was beginning to lose control.

Nonetheless, she straightened herself up. No weakness could be displayed. Not an ounce of her own fear.

“I am your mistress,” she told them carefully, firmly. “Now and forever.”

The muffled voice made her turn to the opening door. To the young man and the bubble-wrapped cowboy. Sheila stiffened. Behind her she felt the portraits grinning. She tried to ignore them, put on her best smile. Despite her efforts, she knew her greeting was cold.

“I’m here to return this,” he replied simply. He set it down in a corner, the eyes staring out from thick plastic.

Sheila licked her lips and began to speak. A quick hand stopped her.

“I won’t ask for a refund,” he assured her. “Don’t worry. But I’m afraid my homesick cowgirl didn’t quite take to this painting.” He chuckled politely, returning her own joke along with her portrait.

And behind her the portraits glaring, smirking. Oh, what to do, what to do?

How could she get him to stay? Such a sweet youth; such a perfect subject. And if her portraits were this insolent, she would need another. A fresher victim who would learn his place.

“Look, I’m sorry,” he said with some hesitation.

Her heart laughed. This one was so innocent. His girlfriend must be older, even if still young. If he kept his gal waiting, she would come to fetch him. Sheila smiled at the thought of having them both.

“Sir,” she said, her tone warm and disarming. “What’s your name?”

No Mister; no formality. The signs of a pliant youth.

“Well, Alex, don’t worry with regards to the painting.” She walked toward him and placed a gentle hand on his shoulder. He blushed. “Choose another one,” she insisted. “On the house.” She pointed at the latest portrait, still fresh enough to obey her gaze. “This one,” she whispered, “is no doubt as pretty as your loved one. Wouldn’t you agree?”

Alex bent down and stared into the face. Into the eyes.

“Yes. Yes,” he whispered. “Quite pretty...” His voice trailed off as he let the girl’s eyes into his, mesmerised by her gaze.

Sheila nodded with triumph. Captured by beauty; too weak to resist. While he stood still, bent over the portrait, she examined his flesh and the veins underneath. Her hand reached down and firmly squeezed his neck. All too enamoured, he gave no resistance. His lips moved toward the portrait’s own.

“Healthy skin; full of good blood,” she said to him, knowing he was too entranced to listen. “You will be my new subject.” She took his hand and stood him up. His gaze remained on the girl’s thick lips. The lips of the young and sweet. “Full of good blood,” she said again. “You’ll be suitable for a different project. One of my sculptures, perhaps?”

She grabbed his chin and forced his lips against hers, tasting his mouth.

“She’s a charmer,” Sheila laughed, staring at the portrait. “Nonetheless, her spell will be wearing off quite soon.”

She reached inside her blazer, withdrawing a thin blade. “Want to see my scalpel?” She held it up to the light, eyeing its cold grin. “I use it for my sculptures. Clay and flesh; both so vulnerable.”

Alex’s head shook in a jittery rhythm, a stiff back and forth.

“Soon you’ll be wide awake. Not good, my dear. Not when I’m going to work on you.”

A flash of the blade and he sunk into her arms.