Amir has been through so many bad relationships that he finally turns to the horoscopes in his local paper for advice. They claim his happiness is around the corner, but “indigo guides the way.”

Within the hour, a man comes into the bike shop where Amir works with an indigo bike. Amir’s coworker and ex immediately invites Jae, the cute cyclist, to accompany them and their biking group on their next adventure.

Unfortunately, Jae brings along his boyfriend Declan, and Amir wonders if the horoscope meant he could learn from their relationship. At first they seem like a typical couple, but the more Amir pays attention, the more worried he becomes. His fear peaks when he finds out Jae’s bike isn’t the only thing indigo about him ... 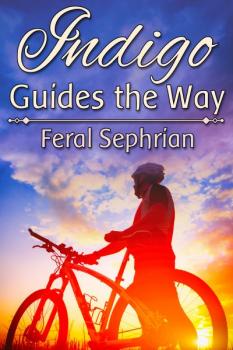 It was nearly noon when they finally reached the Coast Guard Beach. The first order of business was lunch. It was a sort of potluck affair. They couldn't exactly bring coolers with enough food for everyone, but most of them rode with light backpacks in which they had brought boxed fruit juice, trail mix, dried fruit, and other snacks that didn't need to be chilled. Hayden had brought a picnic blanket in the crate strapped to the back of his bike, which they spread out at good distance from the water and gathered around to eat.

Amir still thought Declan seemed like an asshole, but when he and Jae went out down the beach hand-in-hand to look for shells that might fit their growing crabs, he did feel a pang of jealousy. Ken, noticing Amir's envious gaze, offered him a protein bar.

Amir snorted, but accepted the food. "The bike is indigo. That horoscope was a piece of shit."

"Aw, c'mon, it had to mean something. Why else would something indigo show up right after you read it?"

"We've had this fucking discussion already. It was chance. Of all the people who read that horoscope, one of them was bound to run into something indigo the same day they read it." Amir took a bite of the bar. He watched the couple down by the water, carefully picking through the assortment of shells. To offset how sad he was to not have someone to do that with, he said, "Plus, Jae's boyfriend is kind of a douche."

Ken rolled his eyes. "He's not that bad."

"Ugh, he pulled out the whole, So where are you from? question. I hate that."

"He said he wasn't trying to be offensive."

"Which is what most people say when they know they're being offensive. You wouldn't get it. You're white."

"I can get offended by stuff," Ken said.

"Clearly." Amir chewed his second bite. "Dude has the tact of a drunk goose."

"You've known him less than a day. You can't go deciding whether you'll like someone or not based on first impressions all the time, or you at least learn to change your mind after you do."

Amir picked a piece of oat out of his teeth with his tongue. His nose was wrinkled for other reasons as well. "Maybe the happiness I'm being guided to is the happiness that I'm not dating someone named Declan. Who the hell even names their kid 'Declan'?"

Ken rolled his eyes again and sighed. "Oh, great. You're in one of your moods. If you'll excuse me, I'm gonna go talk to someone rational."

Before Ken could push himself to his feet, Jae called out from the water's edge. "Seals! Seals!"

In an instant, everyone was at attention, their heads all turned seaward. About a hundred yards out there were half a dozen heads popping in and out of the water. The Pride Riders scrambled to get out their phone cameras. Amir zoomed in as far as the video function could go and recorded the seals, who were watching the humans on the beach with equal interest. The first thought in Amir's mind was that maybe he was supposed to learn something from the seals. He didn't know if seals mated for life or had any particular way of attracting mates, but these seals were doing the same thing he was doing, hanging out with friends at the beach. If the secret to his happiness was friendship, Amir was going to be disappointed and never trust any vague predictions other than the weather report for the rest of his life.