Lasciate vi stesso voi ch’entrate. “Abandon yourself, you who enter” are the words engraved on the invitation given to Rose Dantes by her fiancé, Nico. It is a chance to uncover her passions and unlock her darkest desires. It is a gift of magnificent proportions—one that will change her life irrevocably.

With the enigmatic Virgil as her guide and mentor, Rose endeavors to complete the gauntlet known as “The Nine,” a pilgrimage tailored to her fantasies. Doing so earns her nothing more than the praise and adoration of her fiancé, something she wants more than anything else. Her quest pushes her boundaries and makes her question her entire life. Yet, Rose is no shrinking violet. She has a mind of her own and an attitude to match, qualities she will need to complete her Pilgrimage. Inferno plunges her into an abyss of pleasure and personal pain, and in the end, she must face her very own Lucifer. 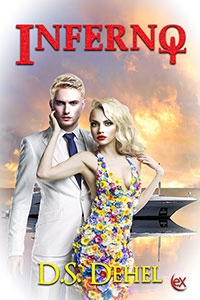 Midway through our life’s journey...

Rose absently ran her finger over the wax seal. The three days since her fiancé had given her the envelope had been excruciating, but knowing what was inside was even worse. Just the thought of the black and gold invitation made her stomach churn.

The raised figure on the seal was a gate barred by a portcullis, but other than being a medieval heraldic device, it told her nothing about the contents of the envelope. Thinking perhaps the portcullis was the logo of a company, Rose Googled it, but nothing she found even came close.

“Well, what is it?” Jackie asked as she flopped into her usual seat at their usual table. “A gift certificate for a day spa?”

Rose shook her head. “It’s something I never expected. Let’s wait for the others.” It was going to be difficult enough to tell this story once, let alone twice.

Jackie made a noise of dismay and rolled her eyes. The red-haired beauty had little patience. “Not even a tiny hint?”

The women had known each other since their senior year of high school, when the four outsiders had become their own little clique, but Rose and Jackie had grown the closest in the intervening years. She really should just tell her. After all, it was Jackie she called first when Nico proposed. “It’s just so odd. I―”

“Hello, darlings.” Astrid set a large gold bag on the table and sat down. She slipped off her designer sunglasses and carefully stowed them in their case, then smoothed her dark bobbed hair. “Happy birthday, Rosie. I see Leona is late, as usual.”

“It’s just a few minutes.” Jackie picked up a menu and pretended to read it.

“How are you, Astrid?” Rose carefully studied her friend’s face. She didn’t appear to be any worse for wear after her divorce, but it was difficult to tell with Astrid. She hid her feelings well.

Astrid straightened her shoulders and bared her teeth in an approximation of a smile. “Better, now the court case is over. Lionel got the house, but I got the Audi and the condo. Have you considered what I said in my email?”

Rose fiddled with her silverware. Astrid’s constant haranguing got on Rose’s nerves. “I’m not asking Nico for a prenup. If anything, he should have asked me for one.”

“Just because he does not have any sense, does not mean you shouldn’t, either,” Astrid huffed. “I’m just trying to protect you, Rosie.”

“The paperwork is already a nightmare just to get married in Rome, then there’s the whole citizenship issue.”

“I can’t believe John Malatesta is making you become an Italian citizen.”

“He’s not making me do anything.”

Jackie slammed down her menu. “Leave Rosie alone, Astrid. It’s her marriage. She can do whatever she wants. And for God’s sake, will you call him Nico?”

Astrid folded her arms and glowered at Jackie. “I knew him as John first.”

“We all knew him as John, remember? But if he has reinvented himself, who are we to judge? You do it all the time. We’re currently on Astrid version number four. Besides, I’d go by my middle name, too, if I had changed so much. He’s a far cry from the scrawny exchange student we knew in high school.” She waggled her eyebrows at Rose. “Right, Rosie?”

“You’re just jealous he asked me to Senior Prom.”

Thank God for Jackie and her ability to redirect a conversation. “That ass belongs to me.”

“I think it always has.” Jackie sounded wistful.

Back then, they had teased Rose about agreeing to date the painfully awkward, skinny Italian who had spent most of the school year in the chem lab, but she had said yes because she was equally shy in her own way, and he had written her a lovely sonnet in Italian that had made her blush with its ardor. The fact they had lost touch with each other after graduation had always been one of her biggest regrets.

“And aren’t you glad I dragged you to that fundraiser?” Astrid gloated. “You would not be wearing that rock on your hand if I hadn’t.”

Leave it to Astrid to focus on the fact Nico was rich, and had spoiled her, not the romance inherent in the fact they had reconnected instantly. “You know I am, Astrid. That’s why you’re my Maid of Honor.”

“Sorry I’m late. The babysitter didn’t show, and I had to get my mom to come over.” Leona bumped the table with her overflowing purse, jarring the glasses and causing a small flood. “Damn.”

Rose and Jackie grabbed their napkins and started sopping up the mess. Astrid stared balefully at the rivulet of water moving in her direction, as if daring it to drip onto her pristine white pants.

“It’s no big thing.” Rose shifted her present from Nico out of harm’s way and dumped ice from her hand onto the sodden placemat. Poor Lee was always so harried these days. Motherhood did not agree with her, or at least it didn’t appear to.

“Happy birthday, Rosie.” Lee hugged her and set a haphazardly wrapped package on the small pile.

“Shall we order?” Astrid snapped for the waiter.

It took time and a few drinks, but the women gradually loosened up, becoming the group they always were, as comfortable as well-worn jeans. Rose understood they each rounded out her life with their own individual quirks. Jacqueline Leopardi was the voice that urged her to not be so introverted and shy. Astrid Wolfe reminded Rose to think of her own needs from time to time and not always sacrifice her happiness for someone else’s, and Leona Price kept her grounded and focused. She would miss them when she moved next Fall, but knew they would always be a part of her life.