Trapped on a dying planet by friends he trusted, Caleath falls into the hands of his arch-enemy.

Fortunately, viewing rights make the Deathbringer a valuable asset. More torture, better ratings. Nobody suffers as well as he does.

Sent back to Allorn, Caleath is the only one able to stop the invasion of his former Karadorian masters. If he keeps a cool head, accepts the help of those who betrayed him and the power offered by the dead planet’s spirit, dare he unleash the ferocious warrior lurking within? Wrath has been waiting for his chance to take revenge far too long. His time has come--for better or worse. 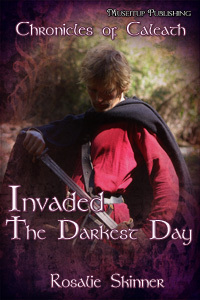 A pulse of wild magic knocked Caleath forward before the backlash exploded along the valley. He reeled in the saddle and watched a wall of wind consume the daylight. Above him, lightning shredded eldritch night, while an unnatural tempest stripped vegetation and rubble from the earth.

Ahead, a cart loaded with children moved onto a bridge across the river. Beside him, Corinne snatched at her horse’s reins. The creature squealed and bucked beneath her.

“Tallowbrand,” Caleath shouted as the storm raced toward him. “We could use a little help! Wizard!”

The hurricane drove a bank of river water high into the air. Corinne screamed and spurred her horse toward the children. Caleath gave his stallion, Enigma, free rein, urging the beast forward.

Before he reached the children, the wave struck the bridge. The wooden structure shattered. Cart, horse, and humans tumbled into the maelstrom.

A whiplash of sorcery slashed against the tempest. For a fractured moment, relative calm surrounded the tragic tableau. For respite from the tumult Caleath silently thanked the unseen wizard.

“The children!” Corinne’s voice pitched above the thunder and rumble of tortured rock. He shared the urgent need in her shout, throwing himself from Enigma’s saddle. His wet hands fumbled while he unbuckled the stallion’s reins and lashed them around his own waist. With a shout and few gestures, he urged Corinne to attach the lifeline to the stallion’s saddle. He left her to calm Enigma. When the horse stood hock deep in rising water, Caleath used the slippery leather and rope for support.

He moved deeper into the raging river. Cold tightened bands of steel around his chest and his head ached as air pressure dropped. He waded through waves of debris snagged on the remains of the bridge. Branches, broken timber, and clods of grass struck his head and shoulders as he fought the current. Through driving rain, he caught a glimpse of the overturned cart and the sodden woodwork that rose above the melee. The precious cargo of frightened children clung to the framework. As he approached, Caleath heard their whimpered cries and strident shouts. A deeper voice of calm among the shrill pleas offered comfort and courage.

He caught the dray’s side and dragged three small boys clear of the splintered frame. With one child’s arms around his neck and another boy under each arm, Caleath pushed away from the dray.

“Hang on.” He turned his back on the terrified faces of those children left behind. “Tallowbrand, tell Corinne we are ready,” he told the disembodied dread lord using telepathy to avoid swallowing more river water. Prohibited from working sorcery himself he relied on his companion, the ghostly archimage, for any form of magic.

Rain ran across his face, filled his mouth and blocked his vision while river water sluiced over his head with each successive wave. If not for the tug of the lifeline at his waist, he would not make way against the drag of the current. Even with this additional pull, progress seemed slow. The children cried as they clutched him and made headway more difficult.

He stumbled on slippery boulders, dragged heavy boots from the guttling mud and managed to reach shallower water. To his relief, Corinne took charge of the children, allowing him to step back into the current.

On the second trip, he half-carried half-dragged two older boys. A young man grabbed the lifeline, adding his strength against the current, aiding Caleath’s progress toward the river’s edge. While he helped rescue the terrified children the youth kept pointing and shouting toward the dray. Corinne lifted saturated bodies from Caleath’s arms.

“El’sbeth and her baby.” The youth gasped, taking one child from Corinne’s arms and scrambling to higher ground.

Caleath nodded, dragged air into his lungs and signaled the stallion to step forward again. Intense cold burned every limb. His legs shook and his boots slipped on mud-covered rocks. With teeth chattering he lifted a hand.

“I am going.” The storm snatched his words away. High on the dray’s upturned seat he could see a girl clutching a baby in her arms. When he reached deep water, the wind whipped his hair across his streaming eyes and hid the young woman and the baby from sight.

“Caleath, I can do no more. This storm is unnatural. I am spent.” Tallowbrand’s hollow voice echoed through his mind. Caleath cursed, surging forward to touch the splintered dray.

“A little longer, Tallowbrand,” he pleaded, but heard nothing in reply.

He scrambled hand over hand along the dismembered cart until he found a foothold. The girl slid toward him across the dray’s bench seat before she dropped into the turbulent water. Her hand reached through the murk, desperate eyes pleaded for help as she struggled to keep the baby’s head above water.

His fingers touched hers. In the same heartbeat, the dread lord’s magic dissolved. In an instant, the storm hammered into the void Tallowbrand’s sorcery had created.

A wall of water smashed into the broken bridge, lifted the structure skyward and speared fractured woodwork into the turbulence. Forces beyond comprehension twisted the cart, thrust the drowned horse into the air and tossed portions of the mutilated bridge in front of the wave.

Caleath heard El’sbeth’s scream above the din. He struggled to reach her but the lifeline pulled tight around his waist before giving way. The sudden torrent tore him from the dray and dragged him beneath the water. Around him uprooted trees, shattered corbels and water pounded into the muddy riverbed. His throat closed when the cart landed across his chest. A silent scream reverberated through his head as a splintered floorboard speared through his side. Watery darkness engulfed him. The dray pinned him in the river’s depths.
Again, he cursed immortality.