Carly Kimball, columnist for the popular magazine Chit-Chat Weekly, is going undercover to reveal the truth behind Madame Evangeline and 1Night Stand. She’ll infiltrate the Grand Turk Castillo hotel and resort for her tell-all article. But Carly is in for an even bigger shock when she comes in contact with a man from her past, Quinn Alfasi, who she shared one passionate night with back in college.

Quinn never thought he’d see Carly again, and now six years later she’s come back into his life. He’ll do whatever he has to in order to expose her as a liar and a fraud. But then his best friend Woody shows an interest. Quinn won’t allow her to fall for Woody’s charms even if he has to team up with his Lothario best friend to claim Carly as his own. 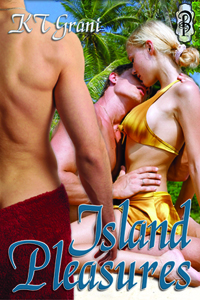 “If you moved here, you could have us at your beck and call every day.” Woody ran his hands up and down her calves.

She blinked at him. “I have responsibilities. I can’t just up and leave because of an amazing massage.”

Quinn snorted. “Responsibilities? Working for a gossip rag? You should write for a more respectable publication. You deserve better than Chit-Chat Weekly.” He dropped his arm around her torso. His thumb roamed against her side, dangerously close to her breast.
She bit her lip to stop from moaning. What was wrong with her? She shouldn’t act this way with Woody around. What could he be thinking?

Woody squeezed the back of her calf. She did moan then.

“Many women have complimented me on my massages and other types of ministrations in the past.” Woody wiggled his eyebrows.

“Yeah…and? What are you implying?” she asked, trying not to fidget as his caresses inched up higher.

“Maybe you’d be interested in creating a memory with us to take back to Vegas.”
“What type of memory?” She wasn’t sure what to make of the change in conversation. The way Woody stared at her made her think he wanted something of a sexual manner.
“You, me, and Quinn could spend the night together in my bed,” Woody announced, and she drew back her legs, ready to kick him.

“You’re not serious. That’s absurd.” He had to be teasing her. He couldn’t think she—
“You’d be amazed by how many female guests want to try something different in the bedroom because they think anything goes here. The stories I could tell you would make your ears bleed. Or perhaps make you come,” Quinn whispered and kissed her cheek.

“A few times.” He ran his finger along the side of her throat. “Don’t knock it until you try it.” He kissed her and she grabbed his arms for support