Who knew being with Mr. Wrong could be so right?

Caitlyn Hart is shooting her first movie, and she doesn't want to screw it up. Still, she's on a deadline and when her co-star, Mr. Hot Shot Campbell, holds filming up, he's immediately on her shit list. But she can't ignore his charms for long or the overpowering want she feels for him. Even though she knows he's her Mr. Wrong, she doesn't mind him being her Mr. Right Now. If only her silly heart would stay immune.

Having been burned once, Jake Campbell doesn't have the capacity to love, but that doesn't mean relationships of a purely sexual nature are off limits. After all, a man has needs. His sexy co-star with fire red hair and a passion to match ignites his own desire and he sets out to convince her a fling is the only way to scratch the proverbial itch. Little did he figure that she'd be the one to penetrate the thick scars on his heart and make him feel. 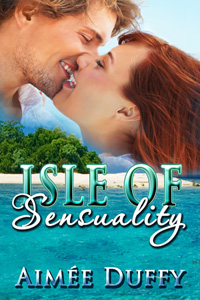 "This read was absolutely breathtaking! I completely enjoyed each and every minute of it." Desere at Romance Book Haven

"Isle of Sensuality by Aimée Duffy is most definitely a 'once you start reading, you can't put it down' story!" Amy at Unwrapping Romance

"What a great romance! I had so much fun reading Isle of Sensuality by Aimée Duffy." A Tasty Read Book Reviews

"Are you looking forward to tomorrow?" Jake asked.

Caitlyn's brows pulled together as she tried to work out what was so special about the following day. Nothing came to mind. "Tomorrow?"

Jake turned to look at her, the cheeky grin back in place which had her heart beating out an unsteady rhythm. "Our characters will share their first kiss."

Her eyes widened as her face grew hot. How could she have forgotten? Probably because she'd been too busy stressing over the love scene to worry about much else.

"Not particularly," she breathed. Jake studied her with a teasing glint in his eyes. Her face flamed.

Irritation flared again and she clenched her hands into fists. She had to remind herself to keep her cool around him. She was supposed to be torturing him, not being tortured herself. Still, the thought that in less than twenty-four hours she'd have his lips on hers sent little heated jitters coursing through her body.

She forced her stiff shoulders to shrug, mortified by her lack of acting ability in his presence. "You can believe what you like."

He pulled the cling film from a platter of sandwiches and offered her the plate. Caitlyn picked up a smoked salmon piece and brought it to her lips. She groaned as the flavor of the bread and fish played across her taste buds. Jake's gaze went to her mouth and, feeling a little vindictive, she licked her lips. He swallowed and a thrill ran through her as she realized perhaps she really was torturing him.

With his focus still on her lips, he asked, "Do you really want our first kiss to be in front of the camera?"

The vindictive thrill vanished as panic started to creep in. She was alone with a man she barely knew for the second time in less than a day. Her thoughts were spinning with bad case scenarios and she couldn't even hear the voice of logic in her head telling her she was overreacting. All she could think of was she was there—literally flirting with danger—alone with Jake and no one had any idea where she was.

"Hey, Caitlyn, what's wrong?" Jake's eyes were serious and he looked concerned. Her inner fear must have shown in her expression, but she couldn't feel embarrassed about it yet. The panic was still forefront in her mind.

"Why did you bring me here?" She hated that her voice sounded small and frightened.

His eyes widened in surprise. "I brought you here because it's the nicest place I've seen on the island and I wanted to spend time with you. Having dinner where we could watch the sun set was all I had in mind."

She relaxed a little at his words. Jake sounded like he was telling the truth, and perhaps a little affronted she had doubted him. "I'm sorry, I overreacted." The voice of logic didn't have to whisper that in her head, it was obvious.

He shrugged and a hint of a smile played around the edges of his mouth. "I won't force you to do anything you're not comfortable with. That's not my style." He paused, took a bite of his sandwich, and swallowed before he continued. "Though if you wanted something to happen, I certainly wouldn't protest."

He winked at her and for an awful moment, Caitlyn had the wildest urge to close the distance between them and plant her lips on his, pulling herself against his well-sculpted chest.

"That won't ever happen," Caitlyn said with bite, trying to convince herself more than him. 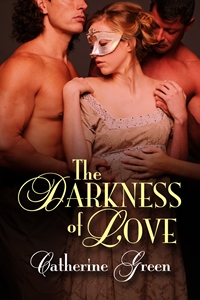