It Started With a Roux (Crescent City Seductions #2)

When disaster put their friend Gregg out of his condo, Martina and Jim agreed to let him stay with them a while. Martina was dreading the disruption to her home life until Gregg showed up—and was much hotter than she remembered! His skillful cooking is not the only temptation Martina struggles with, and her husband seems to be struggling with some temptation of his own as well. The tension simmers between the three of them until Martina decides to take action.

Crescent City Seductions are tales inspired by the passions and rhythms of life in New Orleans. 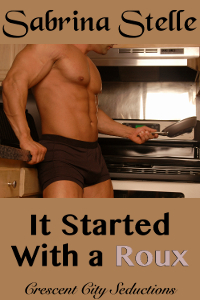 It Started With a Roux (Crescent City Seductions #2)

As they lay together, they caught the scent of breakfast drifting up from the kitchen.
They rushed through the Sunday morning routine in order to come down while breakfast was still warm, just in case he’d made enough for the three of them. “I found a waffle iron among your pots,” Gregg said by way of greeting. “Figured I’d put it to use.” He gestured to a stack of waffles sitting to the side.
“I feel guilty accepting your gift of another meal,” said Jim, “but not so guilty I’m going to refuse.”
Gregg shrugged, and turned back to the stove, where he flipped an omelet. “I’m enjoying the chance to cook again. My first job was in a kitchen. You learn to cook well quickly and in bulk. This isn’t a very practical skill when you’re livin’ by yourself, though. It’s not very cost effective.” He dashed some cayenne pepper on the skillet.
“Thinking like a consultant,” Martina said.
“Pretty much always,” Gregg said.
They sat to eat together, and Martina found she couldn’t meet Gregg’s eyes, especially after he flashed a particularly knowing grin when Jim was off taking his plate into the kitchen. It dawned on her then that what she had thought of as a sexy little game she and Jim had played with each other had affected another person. She may have been unfair, she thought; and maybe she even owes him an apology… though she hadn’t the slightest idea how to bring up the subject without making things even more awkward.
Although, she thought again, to judge by the earnestness of his grin, and the deliciousness of the food he made for us, he doesn’t seem to be too bent out of shape.

Sex on the Beach (MFM)
Ravenna Tate
In Shelf
$2.99
Tweets by
sirenbookstrand