It Takes a Thief

Police detective Jackson Howell met Rebecca Rhodes by accident and it was lust at first sight. Becky had been a suspect in the shooting death of her husband. Her alibi that she had been in the arms of a black lover withstood the investigation.

This yarn has a lot of sex of almost every kind. Interracial sex? You bet there is and plenty of it! I’m Shooter and I guarantee you are going to like this one. 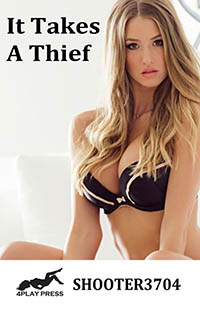 It Takes a Thief

IT TAKES A THIEF

I met Becky one evening at a sidewalk café just down from the farmer’s market. I was just killing time until it was time to go home to my empty apartment and go to bed. The meeting was by accident, if there is any such thing. Now I’m not so sure. It may have been fate.

“Do you mind if I share your table?” a female voice asked. I glanced up to see a nice looking woman standing beside my table. In that first instant of our meeting I wouldn’t have described her as beautiful. That came later after I got to know her.

Frankly I wasn’t in a great mood to meet a woman or anyone for that matter, but I nodded and indicated the other chair. My wife had left me about a year earlier and the final decree had came that morning so I was a bit melancholy. I mean the separation hadn’t come as a great shock. I think Lisa and I knew after the first month that we had royally fucked up. Neither needed a compatibly test to know that we had rushed into the marriage. So while I wasn’t shocked or even mildly surprised, I was still a little out of sorts that it was over.

“I’m Rebecca Rhodes,” my new companion told me. I told her that I was Jackson Howell. “So what’s your sad story?”

“I’m sorry. What was that?” I said. I wasn’t sure I heard the question correctly.

“Well, you are sitting here on a beautiful spring evening with a look that would sour milk. I figured you had a sad tale.”

“Aw, I was just thinking about something that happened at work,” I lied.

“Really? How interesting. What kind of cop?” I told her I was a police detective working out of the attorney general’s office. “I certainly hope whatever caused that look had a happy ending.”

“Yeah, it’s all over with now,” I told her. “Over and done with. What do you do to earn your daily bread?”

“I’m a rich widow so I don’t have any employment,” she informed me. I looked a little closer. One, I wasn’t sure if she was putting me on or not, and two, I wanted to get a better look at her. I would put her age at no older than mid thirty and maybe even younger. That would make her a few years younger than me.

“I wasn’t aware there were any age requirements,” she said with a slight smile. “I married young and my husband was a little older then me. He died about a year ago.” Rhodes? I recalled the name from the newspapers. I remembered that Thomas Rhodes was killed in some mysterious way. I wasn’t involved with the investigation, but I remembered that there was a lot of media speculation as to who the culprit was. In fact if I recalled correctly, Mrs. Rhodes had been a suspect for a while. If not a suspect, at least “a person of interest”. That’s what we call a suspect when we’re not comfortable calling them a suspect. She noticed that I was studying her. “I didn’t kill him or have him killed,” she said. “That’s what you are thinking isn’t it?”

“No, not exactly,” I said. “I was just trying to remember what I read or heard about it. Since you aren’t in jail or under indictment, I suppose the boys downtown don’t think you did it, so why should I?” She shook her head and took a sip of wine without answering so I pressed on. “Sorry for your loss.” That’s what we cops say when we don’t know what else to say. Yes, we all know it’s lame, but sometimes we actually do feel sorrow.

“Thank you,” she said. “My alibi was good and it stood up under close scrutiny. When the authorities realized that I was in the arms of a lover for several hours before and a couple hours after Tom was killed, they had to start looking elsewhere. What do you think of that, Jackson, the detective?”

“I think you had, or have, a powerful lover. That’s a long time to be in anyone’s arms.”

“Had. He’s moved on now. Of course the cops think I may have commissioned the killing.”

“No. If I had wanted Tom dead I would have done it myself. I know who killed him, but it can’t be proven.” Since I was off-duty, lonely, and with nothing else to do, I suggested we go someplace and have a serious drink. She gave that a few moments thought and agreed. Soon we were in a quite little lounge a few blocks away.

“So what’s the rest of your story,” I asked after we got to our watering hole.

The first part of my story is so typical I won’t dwell on it. Small town, high school cheerleader, blab, blab. I managed to save enough money to get started in college. I worked in a small office part-time to keep me in food and books while going to school.

I didn’t have much social life because of school and work. Usually I would manage one or two dates every couple of months. I was as dull as dishwater.

One day my ten year old car just lay down and died. It was worn out when I bought it. I was trying to figure out how I was going to get another one. The city bus service and my feet would work for a while, but not forever.

I was trying to stay dry at a bus stop when a car pulled up and someone yelled my name. It was a salesman who called on my company once in a while. I didn’t remember his name until he told me after I accepted the ride. His name was Orlando Munsey.

Usually I’m a private person, but for some reason I told him about my old car giving up the ghost.

“How old are you, Becky?” he asked. I told him I was twenty-three. My real age always seems to surprise everybody. I have always looked younger than my age. At twenty-three I looked like a well endowed fifteen year old. I was still being carded at bars when I was well into my thirties. Since Orlando told me he was going close to the school I agree to let him drive me to class. It was raining cats and dogs and he seemed like a decent person.

“Okay, as I see it you need to make some money to buy another car,” he said after he parked in the lot adjacent to my building. “You could put your schooling on hold for a while and work fulltime,” he suggested. I told him that I was three months away from getting my degree and quitting school wasn’t an option. I hadn’t struggled all that time just to throw up my hands and quit.

“Yeah, I can see that,” he said. “Then you need to earn some fast money. Ever do any modeling?” I laughed out loud.

“Get serious,” I said still laughing. “What kind of modeling is there for a baby face girl like me?”

“Your figure seems pretty good,” he said. “What I can see of it. You always dress like a ninety year old woman so I’m guessing here.” He had hit on a sore point with me. I do have a nice figure. 36-22-36 on a five foot five frame, but for some silly reason I didn’t like showing my figure off after high school. I hadn’t been in a bathing suit in several years. Some silly quirk I guess.

“I know a guy that uses photography models. He’d give you some work if I asked him to.” I asked him what that paid while shaking my head no. He told me that it was different pay depending on what type of modeling. “Total nudity and video work pays the most,” Orlando said. “You could make enough in one weekend to buy a cheap used car,” he added. I stopped shaking my head at that. I was desperate enough to attempt it. I still had a lot of reservations until Orlando told me he knew where there was a nice three year old car I could get for a couple grand. I agreed to give it a try.