For centuries upon centuries Reverend Jeremiah Holyfield guarded the Prophecy in a small village church at the base of the mountains wherein dwell Narciss and his Legio of evil demon-dragons. But now that the dragons burned the village and church to the ground, Jeremiah runs and hides, taking the precious document with him. Accompanied by eleven-year-old protégé Abram, the two journey across Dracwald. In their search for a safe new home in the distant Solimon Mountains, they encounter Majikals and monsters, natural disasters, and discover new friends. 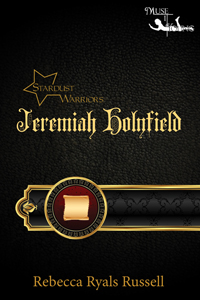 The flaming village blazed high into the night. Those who could escape screamed in their search for family members. Children wailed. Mothers yelled. Victims shrieked. Monsters roared.

Throughout the village, building timbers groaned, thundering in collapse under the licking flames. The stained glass windows of the church, sitting high on the mountain many runths from the village, nonetheless rattled with the vibration.

Alarmed by the cacophony, I jolted out of my meditations, heart pounding. What had happened to our peaceful community? To my right, young Abram, son of a villager who had heard the call to serve Laud, knelt, also in meditation. Eyes round and darting, he gasped loudly through his open mouth.

Dodging pews, we ran toward the heavy, carved doors of the church. Rough brown priest’s robe flapping behind me like angel wings, my sandals slapped the stone floor in time with my racing heart. With extreme caution, I nudged the door open and peered out through the crack. Peeking through the crack lower down, Abram suddenly screamed and jolted backward, covering his face. Banshee wails and leviathan roars filled the night air. Acrid odors of charred flesh and wood burned my nostrils. I stared in disbelief—this couldn’t be happening again. Throughout the village, confusion reigned—screaming people scattered, seeking shelter, desperate for safety.

But safety no longer existed. If only we’d built the church closer to the village, it could have provided shelter now. Who would have guessed, after so many centuries, they would return to wreak havoc.

“My family,” Abram shrieked; tears poured down his tanned cheeks. “I must get to my family.” I clasped him tightly. His head pressed against my chest, heart pounded beneath my hand on his back. With each breath, his chest rattled as he bellowed to be let go. But I did not dare.

Building the church on the mountainside, for the villagers to gaze upon, had provided peace. Until now. Too far to provide assistance, I had no hope of making it to the village. Rescuing Abram must suffice. He could no more make it to the village than I. The flying beasts of carnage saw every movement.

Abram’s frail body jerked and flailed in my arms, his tiny fists beating my chest. Silent tears fell, mourning the loss and carnage. My parishioners, loyal and loving, always there when I needed them, now needed me more than ever. And I couldn’t go. There might as well be a sea between us. Hypnotized by the smoke and flames, construction of the village slid across my memory.

Hundreds of years ago, we had harvested wood from the surrounding forest. But a village built of wood made it vulnerable. Villagers’ flats and cottages clustered along a narrow dirt path interspersed with taller buildings, the living quarters above, the shops at street level. Sobbing openly, I flinched with each tongue of flame rising from the roofs of the taller buildings, tinder and ashes falling onto the shorter dwellings, lighting them aflame.

The boy quieted in my arms, sobbing with occasional hiccups which reverberated through his chest cavity. Unable to look away, we watched through the crack in the door. “Stay inside.”

He nodded, his body wracked with tremors.

Outside the sanctuary, standing on the high stone steps, I watched the horror. My heart quivered with each shriek or building collapse. Orange, yellow, and red, the flames’ chaotic dance wove mesmerizing designs against the black backdrop of night’s theatre. Clouds of purple smoke billowed upward hiding the moon’s face as though horrified.

Stumbling, I grabbed for Abram when he pushed past me racing down the steps. Below us, I saw what had caught his eye. A young child ran wailing toward the church. Behind him, his family’s small cottage collapsed in a shower of sparks and groaning wood.

As I raced down several steps after him, a deep voice filled my head. “You must guard what must never be destroyed.”

“The boys, Lord, they must be saved.” I continued down several steps, aware of the danger overhead—driven to save someone. Movement must have caught the red eyes of the aggressor who circled in my direction. Head swiveling side to side, his course changed—apparently seeing something of more immediate interest.

Eyes wide, heart drumming against ribs, I watched a man dart from the shadows. He snatched the young boy. The beast’s claws raked the air where the child had stood. Abram froze several steps below me. His face jerked toward me, eyes impossibly wide, then back at the monster. In the next moment, the demon swerved and headed toward the church. Abram screamed and scampered back up the steps using hands and feet.

“Run, Abram, run!” I waved at him, my voice rising above the roaring beast. Holding the door ajar, I watched with bated breath. The beast’s claws scraped the stone steps as Abram then I leaped through the door. Although part of the mountain, the church rattled as the dragon’s massive body grazed the roof. The demon roared in frustration.

Abram screamed and writhed on the floor. I wished I could spare him this trauma. Hot, fresh tears of anger and frustration soaked my cheeks. Angrily, I swiped them away with the back of my hand.

“Are you hurt?” I finally managed to ask.

He shook his head no but made no move to rise to his feet. Curled into a ball on the floor, wracking sobs shook his frail frame. I crawled back to the door and again peered through the crack at the burning village.

“Why, Lord? Why must these good people endure such agony?” I screamed. “There are others who are yet alive who need saving. Let me help them.” The sounds of torment and ruin echoed across the mountain face. Robes in hand, I stumbled down the wide stone steps. Determination licked at my heels. I would save them…I had to.

The dragon, his black scaled silhouette crossing the full moon, must have seen me—his arch enemy’s servant. As the monster dove toward me, Laud, Lord of Love and King of the Megaverse, roared through my head, “No! You cannot save these children. It is too late. Their home is with me now. You must save yourself and what you guard.”

“How? I am powerless against these leviathans!” The beast hurtled toward me, neck outstretched, mouth open wide to release a flaming stream of death.