The wife of a Wyoming rancher finds her life in jeopardy. The tale twists and turns as she struggles to raise her twin girls and keep the ranch after her husband is murdered. Who is behind the cattle rustling and murders in the formerly quiet Black Creek County? 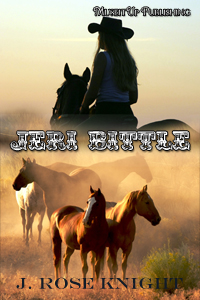 “I’m scared, Mommy, Annie said as the three of them huddled in the living room. The wind howled, and something banged on the roof of the old house.

“I think it’s just a tree limb that needs to be trimmed. Don’t worry about it. Look at this toy catalog and tell me what you want for Christmas,” Jeri said.

Thank goodness I got the propane tank filled; we won’t run out of heat. If I’m careful with the insurance money, we can last until we get the ranch sold.

Jeri had cashed the insurance check at her mother’s bank in Gillette. She thought it would be best if no one besides her family knew of her money. She put twenty of the forty thousand in her mother’s safety deposit box. Small payments on the bills she owed satisfied her creditors enough so that she could now do business as usual. She didn’t want to arouse suspicion by paying everyone off in full. She explained her payments to the bank by saying her folks loaned her the money. No longer in foreclosure status, Jeri slept better at night. Now I can sell some of the cattle if I need to, but I’ll wait until the market gets better. The shrill sound of the telephone jolted her from her reverie.

“Mrs. Bittle? This is Jake Thomas from the ranch where you landed after your wreck, how are you?”

“That’s what I’m calling about. I ran into Sheriff Dexter the other day, and we got to talking. He mentioned you might need a little help this winter out there on your ranch. I could easily spare Bob for a while if you would like to have him. He could do chores. He hasn’t much experience with cattle, but he’s good with animals. What do you think?”

“I would welcome Bob, but would he like to come? I don’t think he likes changes or to be around strangers.” Jeri could not dare to hope.

“As long as he can bring his dog and critters, he’ll be happy. He can stay out in the barn, and no one needs to know he’s there,” Mr. Thomas said. “I’ve tried to tell him what I have in mind, and I think he understands. I’ll bring him over there tomorrow afternoon, then.”

Eric came over the next morning. Jeri briefed him about Bob. “I think he reads lips a little, and he can read and write if you need to communicate with him.”

“I’ll sure try to teach him the chores, and then I won’t have to come over so often,” Eric said.

The sun shone coldly in the distant pale blue sky as the pick-up bearing Bob and his menagerie arrived at the Bittle ranch. The big man grunted when Jeri threw her arms around him, but he didn’t back away.

Bob carried a duffle bag as he followed her to the barn and into the tack room. Jeri lit the propane heater and turned on the water to the big stainless steel double sink in the corner. A single bed and reading lamp were the only furniture. Saddles and bridles hung on pegs against the wall in the room that had been used by the occasional hired man in the past. “I think Bob will be comfortable here, don’t you?” Jeri asked Mr. Thomas as he brought in a cage containing one of Bob’s patients.

“Yes. Thank goodness most of his critters were released. He has this big crow and one three-legged rabbit, that’s all.”

Bob went back to the pick-up and opened the door for Dog. He came barking and bounding up to Jeri, greeting her by licking her hands.

“He remembers me,” Jeri said.

Jeri introduced Bob and Jake to Eric, and went back to the house. I’ll just hope for the best. Eric is so busy at his folk’s ranch, I know he’ll be glad to have Bob take over here.

“Bob is going to work out just fine. He even knows how to drive the tractor. We took hay over to the north sixty, and I showed him how to break ice in the stock dam for the cattle to drink. I think he’s done that before. I introduced him to Jip, and he saddled the horse himself. He’s good with animals. Too bad he can’t hear,” Eric said when he came to tell Jeri he was leaving.

“Thank you so much, Eric. It’ll be such a relief not to have to worry about the chores. Do me a favor, and don’t tell anyone but your mom and Tracey that Bob is here.

“Who would I tell? I don’t get out much,” Eric grinned ruefully.

“Things will get better. I just know that they will. “

Jeri watched him drive off in the jeep. “We have a new ranch hand,” Jeri told Tracey as she got off the school bus. “His name is Bob. He is deaf and mute.”

“I learned sign language at school. Maybe I can communicate with him,” Tracey said.

“I don’t think Bob knows sign language, but he can write on notepaper,” Jeri said.

Tracey and the twins accompanied Jeri when she took Bob his supper of roast pork and mashed potatoes with gravy. She covered the plate with a terry cloth towel to keep it warm.

Jeri knocked on the door so Dog would alert Bob to their presence. He came to the door and smiled when he smelled the food and saw the girls and Tracey.

Annie hid behind Jeri, but Amy walked right up to the big man and smiled. The twins knew Bob could not hear or speak. Tracey offered her hand, and Bob shook it, his piercing blue eyes crinkled in welcome.

Jeri wrote on the notepaper. “Annie and Amy are my twins. Tracey is a neighbor.”

Jeri indicated he should go ahead and eat.

When he finished his meal, he looked at the twins and motioned toward the cage in which was the three-legged rabbit.

“Oh, the poor bunny,” Amy exclaimed, and she knelt on the floor in front of the cage. Annie watched from a distance.

“We better go now. Perhaps Bob will allow you to come and look at the rabbit again sometime,” Jeri said.

“Bob seems to be a gentle giant,” Tracey remarked on the way back to the house.
“Yes, he’s wise and kind. He saved my life, you know,” Jeri answered. 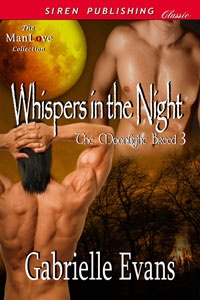 Whispers in the Night (MM)
Gabrielle Evans
In Shelf
$0.99