Jordan isn't having a good evening.

For starters, there's a terrible storm raging outside. Then, the prank he played on his his mother backfired spectacularly. Now she's dead.

All alone in the house, young Jordan knows something terrible is after him. This chilling tale pokes gleefully at one of our most primal fears -- things with too many legs. Not for the faint of heart! 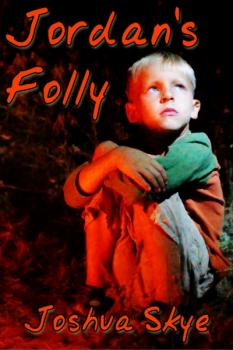 Seven year old Jordan crawled backwards away from the monstrosity before him. He was bathed in the deep, murky shadows filling the house, the house rendered without electricity by the storm raging outside. He couldn’t take his widening eyes off the horror. His mother’s bloody body undulated in violent spasms as a jarring, echoing growl bellowed out of her obscenely wide mouth. There was a brilliant bolt of lightning as a spray of spindly, hairy legs spilled upwards out of her throat.

He screamed and threw himself back into the sofa; the heavy furniture did not yield to him and his spine wrenched painfully as the scattering of throw pillows tumbled down over him. He lashed out at them, slapped them desperately away with madly whipping arms. He couldn’t let the horror out of his sight, not for a second. The moment he was blinded would surely be when it pounced.

As thunder shook the house, the spew of legs slowly curled down until they were splayed out on either side of the dead woman’s head. Her throat bulged, a gurgling resonance came, and then the twitching visage of the spider stretched up and out, unhinging the jaw with a tremendous popping sound. The fangs, grotesquely long, shuddered anticipatorily, searching, wanting as the horrifying conglomerate of eyes focused in on the little boy across the room. Jordan gasped.

A vicious hiss sputtered from the monster as it reached out with its long, hairy legs and began to pull itself, dead-mother shell and all, along the plush area rug toward the petrified child. Jordan couldn’t move. He wanted to, desperately so, but his legs wouldn’t work. He felt like his frightened and frozen self in a nightmare, unable to escape the encroaching menace. He screamed again and threw a pillow at it. The hiss seemed to become a laugh, a low growling amusement mocking him. He started to cry. It was a pathetic reaction, a feeble response to the horror creeping at him. He balled his little hands into fists and slammed them down upon his legs, grunting desperate encouragements for them to work. And the closer the terrible thing got the harder and faster he hit himself.