Heat Rating: Sextreme
Word Count: 42,512
30 Ratings (4.8)
Contemporary Menage a Trois/Quatre
In Bookshelf
In Cart
In Wish List
Available formats
HTML
PDF
Mobi
ePub
Cover Art by Les Byerley
Reviews
Really enjoyed the book
Jlg29
I think this one is the best so far. The guys were hot and they still loved their woman, even though she was a plus size. It's so nice to read stories about women who aren't model thin. I can't wait for the next book in this series.
rhondavb
Read more... 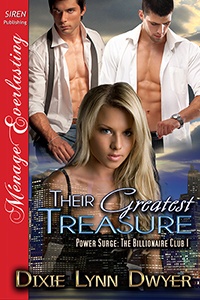 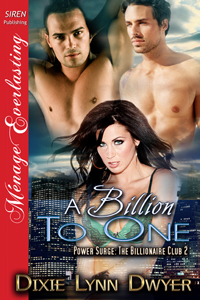 She turned to look around, and like a punch to his gut, he felt himself flinch inside.

Her gaze filtered through the room, as if trying to determine which way she should go next. He absorbed the way the designer dress fit her like a glove, yet revealed enough cleavage to make a man like him fall to his knees and beg for her attention. She was a goddess. A Renaissance woman, and he knew he needed to find out more about her. He had to, before some other man, or men claimed what belonged to him.

He was shocked at the immediate possessive thoughts. He was acting like an ass. Just because he felt confident that he could get any woman he wanted, didn’t mean that this one would automatically accept him. Or perhaps she would. He wasn’t sure and he didn’t want to waste time overthinking this. He was a natural. He was thirty years old, experienced, and a billionaire who fought with the toughest of CEOs in business board meetings. Surly he could seduce a beautiful woman, with a body his cock already was enticed by.

He followed her, and when she stopped by a set of porcelain dishes sitting on some designer tables, he spoke to her.

“That is quite a stunning piece. Do you collect?” he asked her. She abruptly turned toward him, and he felt his eyes zero in on her gorgeous green eyes. The woman was a knockout. She looked sweet as she stumbled to reply to him. He looked her face over as he gave a small smile.

She had the face of a porcelain doll. She smelled as edible as she looked.

“I don’t. I was just browsing.” Her American, maybe Northeast accent mixed with a bit of Southern twang, alerted him immediately to the fact that she was not French. Did she live here? Was she visiting? Was she here with someone?

“Oh, I was going to tell you that the prices here are high. There are better places in town and beyond near the villages.”

“Oh, I know. I was through some of them the last few days. You’re not French are you?” she asked. He gave a small smile as a group of browsers cleared their throats as if he and this lovely woman were in their way. They held one another’s gazes for a moment and then she smiled. He felt it straight to his gut. This was different. He needed to know her. He would totally get to know her.

He reached for her elbow and stepped with her to the side. His heart pounded and his blood heated. She felt amazing. The attraction was mesmerizing.

“I’m not French, no. Are you?” he asked, and she shyly turned away and looked toward the side and another table of merchandise.

“No,” she replied as he walked along with her, and toward the large dining area inside.

He wasn’t going to leave her, but he didn’t want to seem pushy.

“So, is this your first trip to Paris?” he asked.

She looked at him, her eyes wide as saucers as she stared at his face. Was she liking what she saw? He wondered, and then smiled. She was speechless, and he thought she couldn’t get any more beautiful.

She took a sip of wine, wet her lips by sticking out her tongue. He was wrong. She kept getting more beautiful.

He wasn’t going to give her much information. He needed to learn more about her. He stepped closer, his need to inhale her scent and let her know his intentions, obvious.

“You are so stunning. What is your name?” he asked.

“Tia Rose,” she replied. He had to bite his lip between his teeth to not moan in pleasure. “That’s a gorgeous name, Tia Rose. A lovely name, for a lovely woman.” He let his eyes roam over her cleavage.

“Are you meeting anyone, or would you like to accompany me to the dining area? I’m dining alone,” he added suddenly, and it shocked him. This woman was the first woman to make him feel nervous.

She studied him for a moment, and then took another sip of wine. Was it liquid courage?

“Nice to meet you, Hudson,” she whispered, and then stuck out her hand. As he took her hand into his own, he felt a shock of awareness.

He whispered next to her ear, as he inhaled her sensual perfume. “I must tell you, Tia Rose, you are a very stunning woman.”

Her cheeks turned a nice shade of pink, and then she lowered her eyes. A true submissive.

He felt his cock press against the zipper of his tuxedo pants. This woman was special, and tonight was going to be his best night ever in Paris.

“Forget anything but me.” He kissed her again. In a flash he lifted her up and placed her on the bed. His thigh was between her thighs. She reached for the thigh-high stockings and he stopped her.

“They stay on. You look sexy.” He pressed his chest lower over hers and kissed her. His mouth felt hot and amazing against her flesh. She felt sexy and alive, and she wanted to give Hudson whatever he wanted. She didn’t care. She was living for tonight, for now.

His mouth trailed lower over her neck then to her chest. He cupped her breasts. She looked down and was surprised at how his large hands nearly covered a good portion of them.

He stroked her nipples, rolled them between two fingers, and then pulled.

She reached for his hand, as she gasped from the sensations.

“It’s too much. I never felt like this before.”

“Place your hands above your head. Do not move them, Tia Rose, unless I tell you.”

His words were firm. He was ordering her around in bed, and she loved it.

“Remember the rules.” He twirled her nipple between his fingers as he lay half over her body.

She raised her arms up. The move caused her breasts to tilt upward, and he used the opportunity to lick the tip, and suck part of her breast into his mouth.

She was never so turned on in her entire life. This man, his words, his commands, and this entire situation was outrageous. But it fed a hunger, a need inside so great, it made her come again.

The man was relentless. She felt the tiny spasms erupt from within. Then his other hand was between her legs, stroking her.

He stared down into her eyes.

She couldn’t hold his gaze. Hew as too beautiful, too magnificent and had way too much power over her body. It scared her, it aroused her and she felt her body convulse.

He did that little thing, that wasn’t so little, with his fingers and she felt the jolt of her orgasm hit her hard.

She moaned, and he jumped up. Grabbed onto her hands, glided his fingers between hers and stared down into her eyes.

“You are so fucking perfect.” He kissed her. It was soft, then hard and arousing. He adjusted his thick, hard thighs, using them to spread her wider. The bulbous tip of his cock slid between her wet folds, as she held his gaze.

She could see him holding back. His face was tense, his eyes dark and hungry.

This was the moment of reason. “I want you, Hudson. All of you.”

He tilted forward. His cock began to fill her, and she tightened up, anticipating the large girth, and thick muscle to tear her flesh, but Hudson paused.

“Look at me.” He gripped her fingers with his tighter. He gave them a squeeze. She stared at his pectoral muscles. The lines of definition beneath the thick, hard flesh. He was a God. He was perfection.

Her eyes locked with his.

“You’re mine. Every part of you is mine.” He pushed into her. Taking his time, and then when she seemed to be handling the thickness and size, he eased deeper. "Just relax and let me in. We're made for one another."

Tia Rose gasped and then tried to catch her breath. He pulled back out then thrust back into her again and again. He continued to hold her gaze. She saw that he was holding back still and for her sake.

His eyes widened as he pulled out and slowly pushed back into her.

“I don’t want to hurt you,” he whispered between clenched teeth.

“I want all of you, too, Hudson. Every inch. Take me. Make love to me…fuck me. I don’t care, I just need so much. You do this to me,” she whispered.

His eyes took on a look of hunger and need like she’d never seen before. He pulled his hands from her own, maneuvered his arms under her legs so they were curled over his incredibly large biceps and spread her wide.

His initial thrust cut off her airway. She couldn’t breathe. He was so big. He paused.

She shook her head. “I want it. Never like this. I feel so needy.”

“God, baby, you make me crazy.” He leaned forward and kissed her and then deepened his thrusts. He stroked her pussy with his cock in record speed, making her pant and moan and scratch at his skin.

“That’s it, baby. Grab me, be my wild woman.” He leaned forward and licked a nipple, pulling it between his teeth and nipping her flesh. She screamed a small release as he pounded into her. The bed moaned. The cool night air circulated from the balcony and against their heated flesh.