In this retelling of the popular fairytale Goldilocks and the Three Bears, Locke Golding is fresh out of high school when she meets sexy museum security guard, Seth Beare.

He takes her out for coffee then they head back to his fishing cabin where things really begin to heat up between the two of them.

The morning after their passionate lovemaking, Seth turns cold. Locke feels rejected and confides in Seth's brothers, twins Andrew and Michael. Little does Locke know that the brothers--all three--share their women...

Seth didn't think it was possible, but he felt himself harden even more at the thought of being her first. He took another step toward her and leaned over to take her lips in soft kiss. She pulled him back on the mattress.

Locke held Seth close as he situated them further on the bed, then felt the heat of his hands roam her body and unclasp her bra. She blushed as he pulled it away from her breasts and tossed it to the floor.

"You're beautiful." Seth had a hard time catching his breath as he gazed down at her.

"You're wearing too many clothes." Locke reached for the waistband of his boxers and pushed them down. Seth stood long enough to kick his boxers off, then he was back, his big body covering hers, his throbbing shaft nestled between her legs.

All that separated them was the thin material of her panties. Seth kissed Locke again, tasting her sweetness before he tore his lips away and trailed fiery hot kisses down her chest. He teased and nibbled at each taut nipple before he made his way down her belly to the top of her panties.

He hooked his fingers under the lacy material and brought them down slowly. His fingers grazed her heated flesh. The smell of her arousal assailed his senses and it took everything he had not to just plunge himself into her. As he dropped her panties to the floor, he planted kisses along her legs. When he reached her inner thighs he paused.

Seth placed one hand gently on her thigh then looked up into Locke's eyes. "Open for me," he whispered, smiling as she did as he asked. He planted more kisses along each thigh, then slowly pushed one finger inside her warm wet cavern. She tensed at the invasion of Seth's finger, but then relaxed when she realized he'd make good on his promise not to hurt her. 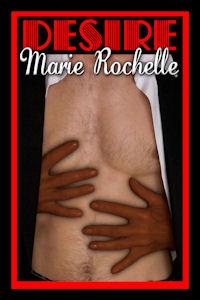