Ten of J.D. Walker's best-selling interracial gay romance are now together in one box set! Contains the stories:

And This Is Ed: Ed is a laidback guy who works as a housekeeping manager and takes care of the elderly in his spare time. He's a very private person, but there's more to Ed than meets the eye. Titus discovers this when he befriends Ed. But a stupid bet derails their relationship. Now Titus has figure out how to get Ed to give him another chance.

Can't Buy His Love: Wheeler is attracted to Gregory, which is funny, since Wheeler usually avoids commitment like the plague. When Wheeler saves a child's life, Gregory sees him with new eyes. Together, they forge a new beginning for both of them: one learning how to open his heart, the other, how to let love in.

Copy Me, Unrequited: Theodore loves Henry, but he knows it's one-sided. Sheldon has the hots for Theodore, but it never goes anywhere. When Sheldon signs a one-year lease for the apartment complex where Theodore lives, Henry sees the attraction between the two and plays cupid.

He's So Heavy: One look at Thorn and Bill wants him for his own. Problem is, Thorn is trouble and Bill can recognize someone going downhill, fast. Bill's offer of help is rebuffed, but when Thorn shows up on Bill's doorstep, he doesn't hesitate to help. Thorn is the love of his life and Bill would do anything for him. Even let him go, if he has to.

Keys to His Heart: While Grady helps his mom rehearse for a show, he bumps into Tim . The instant lust he feels almost blinds him, but Tim isn't interested in casual sex. After some false steps, the two decide to take it slow, and after a month of blue balls, they finally become intimate. Does Tim hold the keys to Grady's heart?

Let the Song Last Forever: Evan has feelings for Chuck, but being betrayed and outed in high school has left scars on his heart. He cools things off with Chuck, but Chuck won't let things go. The two have an argument, ending in a broken nose. When huck still professes his love, Evan has to find a way to make things right.

Loving Me, Loving You: Hanson is tired of his job, and of doing things to please his mother. A harrowing encounter leads him to Lindsey, a man he's sure would never look at him twice. But he is looking, and Hanson doesn't know what to do about it.

Purple Daze: When Gabe meets Beebub , he knows it's love. But his best friend is larger than life and not meant for the small town in which they live, and all too soon, he goes away to college. The day Beebub comes home, all the feelings Gabe has tried to bury return to the surface, and resentment rules his actions. Beebub wants Gabe, but Gabe, he's not so sure anymore.

Something About Lud: Deacon detests Ludwig as a roomie. Lud is really nice to look at, but the man is messy and lacking in hygiene. Still, there's just something about him that keeps Deacon from throwing Lud out on the street. And when Deacon finds out the reasons behind Lud's behavior, the truth can either bring them together, or tear them apart.

The Cookie Said Red: Cisco's fortune cookie reads, "Red is the color of your heart's desire." When his date turns up wearing a red shirt, he's ecstatic. But things turn ugly and he has to call for assistance. Benjy, head of security, comes to his rescue. Then he notices Benjy's red tie. Has Cisco's "heart's desire" been under his nose all along? Are the stars finally in his favor? 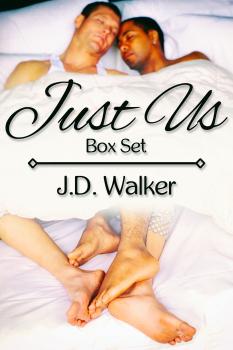 EXCERPT FROM "Copy Me, Unrequited"

“Sheldon! What the fuck, man? You’re in this building now?” I guess his name was on the lease that Henry had finished earlier before he went out on a maintenance call.

He turned around and laughed. “Theodore Mennington. Wow, small world! Yeah, I'm about to sign a one-year lease. You live here?”

Henry looked up in surprise. “You two know each other?” he asked.

“Yeah,” I replied. “His company is on my client list.”

Sheldon came over and sat on the edge of my desk, one leg crossed over the other as he leaned back on his hands. That pose was very appealing. “So you work here and at the copier place?” he purred.

“Not even. I just help Henry out when he’s desperate. I've told him over and over again to hire a full time manager, but nooooo. He’d rather bat his eyes at me and get me to do it.”

With a sultry smile, Sheldon leaned toward me and said, “Well, you know I’d bat my eyes at you whenever you want. Don’t even have to ask.” Such a flirt.

I chuckled at that. “Yeah, Sheldon, and the way you swish your ass when I’m around leaves me in no doubt as to your intentions.”

Hand on his chest, Sheldon pretended to swoon. “Be still my beating heart. Honey, if you’d just say yes to me, I’d show you what my ass can do.”

I winked at him and replied, “And a very nice ass it is, too. Maybe someday.” I smiled and looked over at Henry, who watched our interaction with an unreadable expression on his face.

"I'll be waiting," he cooed. Sheldon stood up and walked his perky ass back over to Henry’s desk. It really was very nice to look at, especially in those snug black slacks. “Alright, Mr. Manager Man, what’s next?” When I didn’t hear a response right away, I looked up to see Henry staring at me like he’d never seen me before. I was caught in his gaze like a fish in a net. What was he thinking?

Sheldon looked back and forth between us, eyes narrowed. “Everything alright, guys?” he asked, voice sounding a little tense. The question broke our connection and Henry cleared his throat as he shuffled some papers around on his desk.

“Yeah, uh sorry about that, man. Here, initial these three spots, then sign your name on this line, please.” Thoughtful, Sheldon glanced between the two of us one last time, then did as requested.

Sheldon turned to me. “Will you be there, Teddy bear?”

“God, please don’t call me that! I hate that nickname, and Henry knows it. Yes, I’ll be there.”

“Fabulous! I can’t wait to see you let loose a little bit, preferably with your crotch rubbing hard against mine.” He gave me a flirty little wave as he left.

“No promises,” I yelled after him, though he probably didn’t hear me. I laughed to myself as I finished up the lease and printed it out for the last new tenant of the day.

“Here ya go,” I said and placed the document on Henry's desk.

Ignoring it, he leaned back in his chair and looked at me pensively. “You know, I’ve never seen this side of you before -- flirty, playful, completely at ease with another guy. I mean, sure, we joke around with each other all the time and poke fun, but that’s best friend stuff. You've never let loose like that around me, or even any of the other guys I've seen you with in the past. You've always held something back.”

Okay, this conversation was a little strange. I shrugged. “It's no big deal. Sheldon’s really extroverted, and he doesn't hide who he is. He's cute and funny. I’ve known him for years, so maybe he brings that side out in me. He’s been trying to get into my pants forever. I’m used to it.”

Henry looked at me like a bug under a microscope. “Yeah, maybe, but I think there's more going on there, and you don't want to let yourself see it. And the way he looked at us when we had our 'moment' just now, I think he was jealous. He has deeper feelings for you than he lets on. The flirting is just a cover, man. Maybe deep down, you know that because you act differently around him, too."