A strange little creature enters the lives of three tough guys at Higgins Elementary. And from that point on, pranks come back like boomerangs, smacking the bullies right in their fifth grade butts!

Sully, the leader of the gang, is the only one who can see this creature, which he names Karmack. Sully learns that the creature’s job is to balance all the bad pranks the bullies have pulled over the years. Karmack warns that if this fails, “dreadful, awful doom” awaits them all.

Sully soon realizes that he must save not only himself but his friends, who have no idea why they keep getting boomeranged by Karmack! 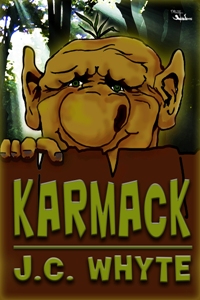 Through front yards, backyards, and down the main road, the pursuers continued to chase the squealer into town. Sully, Breeze, and Gonzo (also known as Curtis Sullenburg, Matthew Brezinski, and Carlos Gonzalez) were the toughest dudes in fifth grade. Everyone knew these three were definitely trouble. And the worst was Sully, their leader.

The old Statewide Bank building lay just ahead, on the corner of Main Street and Railroad Avenue. And that was where the squealer ran out of gas.

Sully immediately pinned him to the ground, right there at the corner. Lying in the snow, the squealer looked petrified. Sully laughed and let go of the boy—just knowing he scared the living daylights out of the kid was enough for Sully. But not Gonzo—he dropped his backpack on the left side of the squealer’s face. “That’s for making us chase you,” he said.

Sully let out a loud “Hah!”

Then the boys heard a rumble. It came from above them—from the pitched roof of the bank. Sully looked up in time to see a bundle of snow drop from the roof. It fell downward, toward Gonzo, who was still hovering over the squealer.

“Hey, look out,” Sully shouted, but not in time. Gonzo did look up, just as the pile of snow hit his face. The squealer managed to squirm out of the way and take off down the road. Breeze began to dig out his friend.

But Sully was frozen to his spot, still gazing at the roof of the bank. Because he saw something up there—a small figure no bigger than a two-year-old. And was it…laughing?

Sully knew it couldn’t be a child. Not with that long, fat nose. Definitely not a child.

Was it just his imagination? Or maybe…a reflection…from ice on the roof? After giving his eyes a good rub, Sully changed his view of the roof by walking around the corner. And there—there was that little guy, laughing again! The creature in the funny green outfit saw Sully too. Then came a flash of light as it darted to the other side of the roof, beyond Sully’s vision.

“Yeah, Gonzo got dumped on. Lucky break for the squealer.”

Never the shy one, Sully next ran into the bank to question the first teller he saw. “Is some guy up on the roof?”

“You got some guy shoveling snow off the roof? My friend, he got dumped on.”

“Uh, not that I’m aware of.” The female teller turned around and asked the branch manager the same question. Then she returned to Sully. “No one’s on the roof. What’s the problem?”

The manager came to the counter. “There’s no one up there, son. Some snow must’ve fallen from the roof. Is your friend all right?”

“Yeah, I guess. But I coulda sworn I saw someone up there.”

The teller smiled. “Probably just glare from the sun. Nice to have some sun today, isn’t it?”

But Sully only shrugged and walked out of the bank.

The guys were waiting for him outside. Gonzo was dusty with snow. And he was cradling the left side of his face. It was red and starting to swell.

“That’s what I wanna know.” Sully frowned as he committed the creature’s face to his memory. Anyone crossing Sully usually lived to regret it.