Born in the City of Angels, raised on Walt Disney, and inspired by the dreams of both, Kathy Holmes grew up in southern California halfway between Disneyland and the beach. She was only seven the first time she saw the neon lights of Las Vegas. Ironically, Kathy, her husband, and their three Burmese cats are now living in Las Vegas.

Q. When did you start writing – in childhood like so many other writers?

A. Actually, my first love was singing, and I entertained the neighbor kids with “performances” on my backyard picnic table as my stage. I also made up bedtime stories for my younger half-sister. But when she’d request I continue the story the next night, I wouldn’t remember the story. She’d remind me, and then I’d pick up the story from there. I tried writing them down but I was more curious how printed books were made. And I found out when my eighth grade journalism class toured the print shop. That led to a career in typesetting, graphic design, production editing, and eventually, technical writing. I didn’t start writing fiction again until 2002.

Q. What prompted you to start writing fiction in 2002?

A. Once I started embracing the writer in me as a technical writer, the desire to pursue fiction writing grew. About the same time, I began a search for my biological father and once I met him, I realized I had to share this experience by writing about it. And while I did publish a nonfiction book about it, writing fiction is the most satisfying to me.

Q. Would you say that you have a theme in your writing?

A. Yes. My theme is about women overcoming adversity — either because they grew up without a father, a mother, or had some other challenge in their life that causes them to dig deeper. Why? Their life isn't working. I really have a "Starting Over" theme in my writing. There is an internal change the main character has to make before she can start over. She’s motivated because before she can get to where she longs to be—with her "happily ever after," she needs to tap into her main issue.

Q. What was the inspiration for The Tom Jones Club?

A. Tom Jones takes me back to junior high when one of my best friends was really into him. Well, I wasn't sure what I thought - he didn't really seem like my type but there was something about him that fascinated me.  Fast forward to about twelve years ago when hubby and I flew to Las Vegas from San Francisco just to see Tom Jones perform onstage. And Tom didn't disappoint. But what really caught my attention were the women sitting in the first couple of rows—older, well-preserved women—I could see them as members of a Tom Jones Club. It was only after I wrote the book that I discovered there really is a Tom Jones Club. And having just seen Tom Jones again in Vegas, I can report that women—women of all ages—and men are just as crazy about him today.

Q. What are you working on now? Another mainstream romance?

A. I see life through romantic lenses so everything I write has some sort of romance in it. But I also tend to work on more than one project at a time. One of my works in progress is a contemporary romance and the other is a romantic entanglement set in the past, but isn’t a traditional historical romance. I tend to have scenes that flash back to the past in everything I write but this is different because the entire book takes place in the past.

Q. Where do you call home?

A. I grew up in Southern California where Las Vegas is considered our backyard. But the first time I saw Vegas, I was seven-years-old. My stepdad was trying to quit smoking and in order to keep his hands busy, he thought throwing dice on a craps table would do the trick. I remember sitting in back of the family station wagon doing my homework and being mesmerized by the neon lights. I knew from that moment on that I wanted to live in the “bright lights, big city.” And, ironically, I’m now living in Viva Las Vegas, feeling the ghosts of the Rat Pack and Elvis. 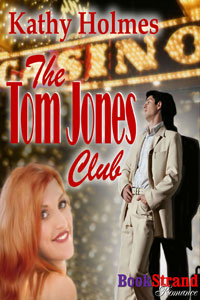