Meet Kiera, a pretty, intelligent, and talented girl, brought up by her uncle, and abandoned by her parents. Life is as normal as she believes it to be, apart from the deep ache inside her, telling her she’s different. For years, Kiera had dreams where she ventures into a different reality. She’s not alone; a presence is always there, keeping her safe, yet she feels vulnerable, and hunted.

Zakk, Prince of Zantar, is under the Witch Queen’s spell as she tries to take over his world. He crosses paths with Kiera, and their fates are entwined.

As their journey unravels, she learns that she is not the only one affected by this prince. Who is on her side? Will she find out why she has been chosen? How can someone so young, defeat such evil? Will she find the strength to save the ones closest to her? Will this be Kiera’s only Quest? 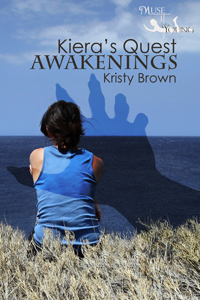 Zakk felt his throat grow tighter, barely able to breathe. Sweat dripped from his brow. “What…what did I do wrong?” Zakk gasped helplessly. He could see nothing but felt the invisible hands clamped around his neck. “Please stop, please.” Zakk was on the verge of falling down a bottomless black hole. He felt heavy like lead, dragging him deeper and further down. Knowing this to be his ending, he managed to push out with a thin, shallow breath, “I’m sorry.”

Suddenly, the vice gripping his throat loosened and discarded him to the ground like a crumpled tissue. Maybe an apology was all that ‘it’ needed. Minutes passed, feeling like an eternity. All seemed quiet in the icy air. He dared not move. Zakk tried to collect his thoughts and regulate his breathing. In and out…in and out slowly, he told himself. He tried to catch a glimpse of his jailer but couldn’t see past his own shadow. There was a definite presence watching him, enjoying the show. A wave of emotions passed through him; pain, loneliness, emptiness, dread, but most of all fear. They seeped into him, like black ink coursing through his veins, devouring his consciousness. For the first time in his life, he felt totally alone. He knew if he could scream, no one would come. If he tried to run, his legs would not aid him.

“Who are you?” Zakk whimpered.

“Who am I? Who am I?” This voice somehow seemed strangely, and uncomfortably, familiar to him. The voice broke into a spine-chilling laugh.

“Don’t you know?” it mocked. “Look hard, deep into yourself. You know who I am. I am your darkest fear when you close your eyes. I lie in wait at your very core. Who am I?” The voice seemed outraged not to seem significant in Zakk’s life.

Zakk nervously fiddled with the dull glass ring on his middle finger. It had belonged to his mother, and just touching it reminded him of her warm smile, her golden silky hair and the lullaby she sang to him to tuck him up each night.

“You’re the Witch Queen!” He realised instantly, like a storm cloud had passed letting the sun reign through. He’d waited so long for answers but still was not face-to-face with this cold blooded murderer. “You killed my mother.”

“Clever, clever Zakky. Clever child,” she hissed. “Your mother would be so proud of you.”

Silence fell upon him again. He felt deeply saddened but immensely angry. If he was going to die here in this cave, he needed to know. Zakk spoke calmly and evenly, trying not to annoy his captor.

“Why did you take her from us?”

“But you did?” Zakk asked, even more confused. “You loved my father?” Surely she was not capable of such an act.

“Silly boy, silly little Zakky. I do not love. It is a weakness. It eats you alive, swallows you whole then moves on to dessert.” She spoke as if she’d tasted this bitter pain, but no one this void of life could have. “I got my sweet revenge on Helen when I threw her body into a D’rog pit. They tore into her like she was a yummy treat.”

Tears pushed under his eyelids. He couldn’t swallow, for the boulder-like lump blocked

“She was tossed from one to the other, like a little raggedy doll,” she sang, with great malice and delight.

Zakk, now broken, wept. He could no longer hold the tears at bay and gave in to his despair. He pictured his mother’s gruesome death and melted into a pool of sorrow. The Witch Queen poked her spindly leather finger into Zakk’s cheek, but she was still covered by the veil of darkness. Watching his tears run down her long, ugly finger, he noticed a very familiar glass ring at the end of it. Shaking his head in disbelief, Zakk looked again, recognising his father’s ring. Time slowed down in his mind. Sweat gushed down him like rain.

“Father!” he cried. “Father?” Zakk knew his only response would be that of his own echoes chasing each other round the stone cave walls.

“He’s gone,” she said, stepping a little closer so he could just make out her eyes. He searched them wildly for a hint of compassion, but there was none to be found. Like hard coal, they were dead inside.

“No, no,” pleaded Zakk, kneeling on the floor with his arms clasping his chest. He held on to all he had left. Himself.

“I will rule Zantar; it is meant to be. All will live in despair and fear of my gaze upon them. I thought you might have been my biggest barrier. But as I look upon you, crying like an infant, I find you weak, boy. It will be easy to send you to join your parents. It’s only fair after all.”

Immediately, as if from nowhere, flames bolted toward him. Bright reds and dancing oranges licked at his heels, engulfing him. Zakk raised his hand to shield his eyes. This is it. I am finished. I couldn’t save my family, or my people. I am nothing.