After years of building her business, Letti now longs for romance and commitment, and thinks she might have found it in Taut Johnson. Unbeknownst to her he is an FBI agent working undercover to find a terrorist using Letti’s dolls to attack innocent people with the powerful toxin, Ricin. He knows he can't allow a relationship to develop until the case is over, yet finds he is unwittingly falling for Letti, and now she is in danger, bringing back the past and a fear that he cannot protect those he loves.

Meanwhile, children are in increasing danger. Meanwhile, there is another death. Meanwhile, Taut's deceit threatens their growing love even as the stalking terrorists threaten their lives. 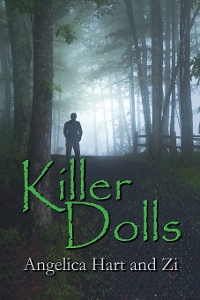 Taut was quite aware of the danger that was just unvialed and reacted with quick and keen moves. Approaching her from her rear, he placed one huge powerful hand over her mouth so she would not inhale any toxins and his other arm about her waist. Lifting her from the floor, he retreated from the danger. He kept focus. Reviewing what he had memorized from Charles Gallagher's e-mail.

Letti gasped at the unexpected behavior but she wasn't adverse to it. After all, he did something similar when he had kissed her so suddenly in her apartment. It felt like one of those fantasy moments, something right out of an old-fashioned bodice ripper. Yet, the moment wasn't quite right. There were those guys. Shouldn't they be a bit prudent, or did the possibility of danger turn Taut…well…taut.

She struggled but he refused to release her. He couldn't let her do anything that might spread the ricin. Gallagher had provided photos of ricin victims. He would not allow this to harm Letti. No one was to be hurt. Not again. Not on his watch. That imperative directed his next decisions.

His hold was an aphrodisiac, animalistic, driven, homogeneous with her want, placated only by submission to it, and her body began to respond. Shallow short breaths followed the intense heat smoldering in her groin, incinerating any resistance, and guaranteeing conflagration of raging flames of lust. The tight, pucker of her nipples signaled her growing arousal, and heaviness attached itself to her breasts, having that need to be touched. She surrendered to his authority, submitted, and urged him with her acquiesces to take more.