Johnny thinks he's the only guy on the ranch interested in sharing a fellow cowboy's bedroll ... until he witnesses an illicit tryst between his foreman Hank and another ranch hand named Delfino. After watching Delfino pleasure Hank, Johnny can't get the Mexican vaquero out of his wet dreams. He wants Delfino to do the same things to him, and he'll do whatever it takes to hook up with the cowboy.

To his surprise, Delfino doesn't mind showing Johnny a good time in the barn ... for a price. Once the two men are alone, Johnny learns first-hand just how well a hot stud like Delfino can please a man. 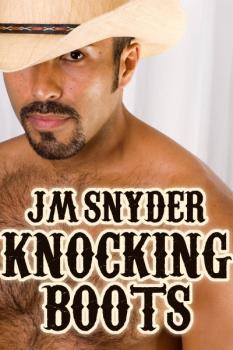 The footsteps come closer and I raise up a little, just enough to peer around the mare’s neck. Hank comes into view, his blond hair tamped down around his scalp in the shape his Stetson left behind. He runs a hand through the tangled strands, tousling them. The other hand tugs at the bolo tie he favors, loosening it to unbutton the collar of his shirt. “Delfino,” he says in a slow drawl that sounds like smooth bourbon poured into a chilled glass. “Don’t act dumb, kid. You know exactly why I called you out here.”

Behind him comes Delfino -- Hispanic, maybe my age, maybe a year or two older, with dark eyes like pools of liquid ink and black hair that falls straight across his forehead in a blunt cut. He has pouty lips that look too red to be real and cheekbones that hint at native blood. Why hadn’t I noticed this one before? He stands out from the others, from all the others, white or otherwise. He has an insolent air about him, a slow grin and sly eyes, that makes me wonder if Hank’s really the one in charge here or if Delfino has a secret or two he keeps hidden from the foreman.

He wears a threadbare work shirt, the chambray worn shiny in spots where the fabric rubs over his muscles, at his shoulders, his elbows, his biceps. He glances around and I duck down, hands flat against the mare’s withers to keep her quiet. She nickers gently into the bucket of feed I gave her when we first entered the barn and swats at me with her tail, threatening to dislodge the hat hiding my face. I push it down further over my eyes and hold my breath, waiting.

Why are they here? Hank says Delfino knows, and something in the air between them tells me they think they’re alone. If they find out I’m here, hiding, what will be said? I should’ve stood up as soon as they entered, cleared my throat, dropped the curry comb, something to announce my presence. Maybe if I stand suddenly, pretend I don’t even know they’re here, I can still get out before ...

I start to stand, rising my chin to peek out from under my hat, and what I see stops me in mid-stretch.

Hank’s shirt is completely unbuttoned now, hanging open to expose a firm chest covered with thick, graying hair and the start of a slight paunch above his belt. Delfino has closed the distance between them, his hand flat against Hank’s belly, the fingertips lost in the tufts of hair. He’s staring into Hank’s face but the foreman doesn’t see him -- Hank’s eyes are shut, lips parted slightly. As I watch, Delfino rubs his hand up Hank’s furry chest, the tip of his middle finger finding a hard, pink nipple amid the hair. Hank gasps, both hands dropping to the buckle of his belt. “That’s it,” he sighs as Delfino plucks his nipple, squeezing and teasing it erect. “God, yes.”

I need to get out of here, now, I know it, but suddenly my knees have locked up and my hands are fisted in the saddle blanket still tossed over the mare’s back. A sudden heart beat throbs at my crotch, and in the confines of the tight jeans I wear, my cock swells with eagerness. My mind is a whirl -- Hank, here, Delfino, here, with me not ten feet away and watching.

Carefully I ease around the mare and, staying hunched over so I won’t be seen, I come up against the side of the stall. There are knotholes in the wooden slats, wide enough for me to peer through without being seen. Please keep doing whatever it is you’re doing, I pray as I squat in front of one of the larger knotholes. I have to tilt my hat back so I can press my face to the wood and look through.

Hank’s belt is unbuckled now, his fly open, his dingy gray underwear gaping through the fly with an obscene bulge. He leans back against a stack of hay bales and sighs Delfino’s name as the Mexican trails a hand down Hank’s belly, seeking the package beneath it. When Delfino grips the bulge, I see his fingers encircle Hank’s cock through the thin material and almost come in my jeans at the lusty moan that escapes Hank’s throat. “That’s it, Delfino. You know what to do.”

I watch, wide-eyed and breathless, as Delfino kneels in front of Hank. With both hands, he peels the underwear down, exposing a long, thin, hard dick that curves at the end like a question mark. Delfino ducks below it and, tongue out, licks at the tip of Hank’s hard shaft.

Yes, my mind cries as I rub my hand over the straining crotch of my jeans. Yes, yes, yes.