King Olav of Olavland and his Queen are making out a suitable suitors list for their daughter, Princess Gloriana. Twelve princes will be selected and invited to a grand palace ball, and Princess Gloriana will choose one to marry. It was the way things had been done for a long time. But Princess Gloriana was already in love – but the person she loved could never be on the suitable suitors list, because he wasn’t a prince. But when the King rescues a mysterious stranger from his lake, a half drowned prince who has lost his memory, and brings him home to supper, Gloriana’s feelings, their plans, and the dinner table, are thrown into utter confusion. 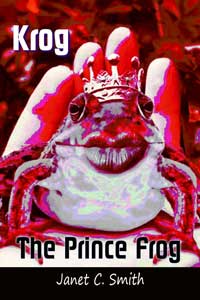 Once upon a time, there was a frog. That tells you that I’m about to begin, just in case you weren’t concentrating, and I set off without you. It’s a bit silly really because it’s got to be once, otherwise it wouldn’t have happened at all. Unless, I suppose, it had happened twice, or even more. As for upon a time, well it can hardly have been off it can it? Anyway, it’s a traditional way of starting a story. What I am certain of is that the frog, large, green and gleaming with bulging yellow eyes was named Krog.
Now frog Krog, or Krog frog, whichever way you want to think of him, lived amongst the marsh marigolds and bulrushes of a boggy meadow pond where he was happy. He had an ample supply of food in the form of midges and other insects that like to be around water. He had outgrown the threat posed by the two white ducks that shared his pond, and wild geese could be put off by his surprisingly loud “Kro-o-og”. He did however, like others of his kind, live under the shadow of another enemy, but we’ll come to that very soon.
Krog had a strong voice and liked nothing better than a good sing song. His favourite time was when the sun was setting, casting a golden glow upon the pond, and a refreshing evening breeze tickled the reeds. Krog’s chosen perch for his evening recitals was an old upturned bucket at the pool’s edge. Here he would sing and sing and sing and sing and sing and sing and sing and sing, and sing - and sing, until, suddenly tired, he plopped into the reeds, sliding shut the lids of his headlamp eyes.
One evening, when the pond was glowing orange and the ducks settling amongst the reeds, he leapt upon his muddy dais. As he sat, sheltered behind a clump of water iris, blinking and watching the insects dancing over the water, he completely failed to notice that the enemy number one of all the frogs had entered the meadow.
Had Krog been listening to what was going on around him, instead of to the tunes in his head, he might have heard a steady squelch, squelch, squelch. Had he peered through the blades of green, he might have seen advancing towards him, the very thing that his parents and his grandparents and his great-grandparents and his great-great grandparents and his great-great-great-grandparents and so on had warned him about - but he didn’t.
What Krog didn’t hear and didn’t see, was a witch. On her head was a pointed black hat, around her shoulders a flowing black cloak, and on her feet, wellington boots, because as you know it was very muddy.