Mabriona is cousin to the beautiful and spoiled Princess Alana. When Alana is forced to marry a man she despises, Mabriona is torn between her loyalty to her cousin and her attraction to the handsome Prince Blayne.

Tragedy befalls the cousins on the way to Prince Blayne’s castle. Servants, believing Mabriona to be Alana, refuse to listen when she tries to explain.

While she waits for Blayne to recover, Mabriona meets his equally handsome younger brother, Madoc, a bard.

When Blayne awakes, will Mabriona choose life with a future king, will she be sent home in disgrace because of her inadvertent lies, or will Madoc win her love with his poetry? 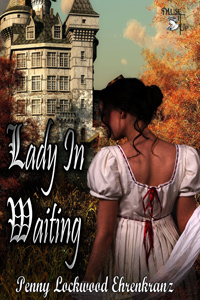 Mabriona assisted Alana down to the common dining hall as was her duty. The big room was warmed at both ends by huge hearths. In honor of Prince Blayne’s arrival, the boards had been scrubbed until they gleamed. Warm, fresh-baked loaves of bread graced each table, and the delicious aroma made Mabriona’s mouth water as they entered the room. Jars of honey mead sat within easy reach of all. Pewter bowls piled high with fresh picked apples and pears were artfully placed. Serving wenches waited, poised, with huge pots of steaming porridge.

King Cedric already sat at the upper table with Prince Blayne at his right hand. His face lit up with a smile when Alana and Mabriona approached. His voice boomed as he greeted his daughter, “Here she is, the flower of my life.”

Mabriona’s breath caught in her throat as her eyes met Blayne’s. As Alana had feared, the young prince was dark-haired with eyes the color of jet, his stature kingly. Broad shoulders and well-muscled arms nicely filled out his deep purple brocaded doublet. A full beard of coarse black hair covered his cheeks and chin, but what stopped Mabriona was his smile. Never before had she seen someone’s face light up like the sun rising on a summer’s morn. Yet, this was what came to her mind. Clearly, Blayne’s smile was meant for her, but why?

He stood and walked toward the women. “Princess Alana,” he said, bowing before Mabriona, his glance speaking words of heat and passion.

“Oh no, Your Highness,” Mabriona said, blushing. “I am Princess Alana’s lady-in-waiting, Lady Mabriona.” She felt Alana glaring daggers at her and quickly curtseyed to hide her embarrassment. Alana made it clear earlier she wasn’t attracted to dark-haired men, why is she so angry? It isn’t my fault the prince was confused. Alana looked down at the floor before glancing up at the handsome prince.

“Forgive me, Lady Mabriona. I’ve made an unthinkable error.” Prince Blayne bowed again and then turned to Alana. “Your Highness, your beauty should have made it clear to me you are my intended.”

Mabriona’s heart sunk. She saw Alana’s cold look as Blayne bowed and took her hand to kiss. She knew then that Alana hated him, yet Alana would marry him as her father decreed. It was unfair, but Mabriona was already wise enough to know she couldn’t change her lot in life. Alana would marry the handsome prince and live happily ever after, and she would remain the ever-faithful servant catering to Princess Alana’s every wish.

Blayne grasped Alana’s elbow and led her to the table to sit beside him. Yet as Mabriona watched them, Blayne’s gaze slid back to her, lingering as if he could imprint her image upon his soul. Her knees felt weak, and Mabriona quickly took a seat at the far end of the board. Her heart beat rapidly in her chest. What was happening to her? Prince Blayne was not the first man to have caught her eye, yet he was certainly the first to have affected her so she could barely breathe. Unobserved and temporarily forgotten, she watched the couple. Just as she suspected, Alana kept her nose in the air and cringed each time Blayne looked at or touched her. King Cedric would get an earful as soon as Alana got him alone, of that Mabriona was certain. Her heart bled for the handsome prince.

She looked up to see Alana motioning furiously at her. She went to the princess and bent near her. “Yes, Princess?”

“Get me out of here, now,” Alana whispered harshly.

Mabriona offered her hand, and Alana rose from her place. Blayne looked up, catching Mabriona’s gaze. His eyes sparkled, and a smile spread across his face. He bowed his head slightly. He openly flirted with her. This could not be happening. If King Cedric saw the interplay, what would he think? Blayne was the intended of Alana. Things could not get any worse. Her thoughts tumbled like the bones the guards threw when they played at betting games.