What does a P.I. in search of a man who triggers illegal payoffs from slot machines, and a staid gal who’s a CPA, traveling on the gambling cruise ship as a bridge partner for an elderly aunt have in common? Maybe nothing until an uninvited Wheel of Fortune Tarot card enters the scene and alters all their lives. 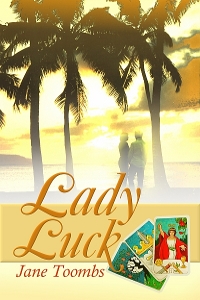 Lyda Morse left the used bookstore trying to manage a bag filled with Regency romances in addition to the cosmetic purchases Great-aunt Detra Blackstone had sent her after at the last minute. Detra was a dear, and Lyda loved her, even though she had to bite her tongue not to snap at her sometimes.

The cruise ship personnel hadn’t been at all happy with Detra’s insistence that Lyda be allowed to get off and pick up “just a few items I desperately need before we sail.” However, no one ever refused Detra, who gently but firmly stream-rolled over all objections and rules.

Burdened with too many “just a few items” Lyda hurried toward the dock wishing she’d had the foresight to bring a tote bag. She was so intent on getting back to the ship that she didn’t heed the call from behind saying, “Ms. You dropped something.”

She didn’t realize the warning was meant for her until a dark-haired man appeared at her side, waving a book. As he did so, something dropped from the pages. They both stopped while he picked it up.

“Tarot card.” He replaced it between the pages of the paperback. “Wheel of Fortune. Appropriate if you’re heading for the cruise ship.”

She gave him a blank look.

“There’s a casino aboard.” He offered her the book.

Not wishing to reveal her total lack of knowledge about cruise ships, she murmured, “Of course. Uh, would you mind slipping the book back into one of the bags? If I try I’ll drop everything.”

In doing so he leaned closer, smiling, and she felt a zing of attraction. Not conventionally handsome, but the rugged lines of his face appealed to her.