For Clay, always a misfit and bullied at school, contact with the railroad and railroaders in the small town where he grew up was a lifeline. He has gone on to a career in the industry, though not out on the track. Now an odd compulsion draws him back to his long departed home despite the painful memories he has of the place.

A chance meeting with Jon, a famous world-traveling scenic and wildlife photographer, results from Clay’s impulse, and the men end up sharing an afternoon’s tourist rail trip. Clay develops an instant crush on the beefy man, but what can a geeky clerical-type rail-buff offer a hunk like Jon, a self-professed and footloose lone wolf? Can Clay be satisfied with a brief, hot vacation fling? Or can mutual interest in trains and photography provide enough common ground to form something more between them? 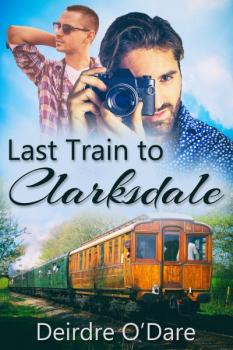 They both leaned out over the guard rail to see as much of the bright blue expanse of sky as possible. Then they saw them, two huge birds soaring between the looming cliffs, riding the wind currents with incredible grace. Jon began to shoot pictures as fast as he could. Surely some of them would come out.

Then he stepped back a half-step. “Come on, Clay. Give it a try, anyway.”

The other man had eased back to give Jon room but now leaned forward and pointed his camera skyward. Jon closed in behind him. He stooped to try to catch a glimpse of what Clay was seeing in the small screen of his camera. Almost without thought, he reached out and steadied the other man’s hand, pointed the camera to catch one of the eagles seeming to hover barely above the eastern rim of the canyon.

Clay did and together they managed a couple more before the train moved on enough to leave the great birds behind. Even then Jon didn’t move. He felt Clay’s posture stiffen for a moment and then relax, as if he too enjoyed the close contact. It did feel good. Clay had a nice trim ass, and his snug jeans set it off. Jon felt himself going hard, pressing into that crease with just a few layers of fabric between them.

He heard Clay’s breathing quicken and the other man gave an almost imperceptible wiggle, pinned between Jon’s bulk and the metal railing.

“W-w-what are you doing?” Clay spoke in the softest whisper as if to be sure no one overheard, even though there were only about a dozen others in the car and no one close to them.

Jon chuckled, a low rumble of amusement. “Having a little fun, maybe. Do you want me to back off?”

“N-n-no. You don’t have to. But we’re right out in front of the world and everybody!”

“That’s what makes it fun. Taking a few risks, being edgy and bold. Life’s a lot better that way.”