As opposites, the mercenary Mike and the mass murderer Keelan have overcome numerous challenges together. Now, Keelan’s past has caught up with him, and they are forced to consider whether they dare trust anyone else. It’s a difficult question when Keelan’s daughter, Misery, seems to have inherited a few of her dad’s more questionable talents.

Misery wakes up to a whole new life on a ship with mercenaries. Trust is not in her nature—especially when it smells of authorities.

But they can’t handle this one alone. It’s time to pool all their resources. 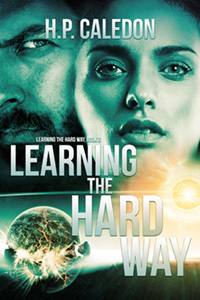 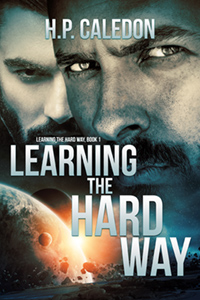 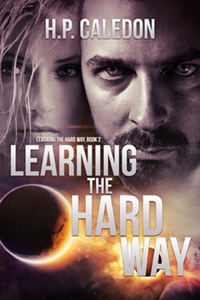 Misery looked down herself, then in the mirror. Her clothes had to be washed, so for the past three days she’d used Mike’s clothes as Kaleb’s were too big. She’d managed to steal one of Kaleb’s t-shirts as a nightgown, though. Gown being the key word here. Mike’s sweatpants were still so long that she had to fold them up or they’d bag around her ankles.

She stepped out from the bathroom and heard Mike and Kaleb arguing in the kitchen. She couldn’t hear what about, but if it was privacy they wanted, they could go into the cockpit or downstairs—the two places she’d been told not to go.

“—I’ll help you toss his ass down the ramp, but I will not set my feet on Delta Zeich’s dock!”

Silence. Mike uttered a deep and resounding sigh. Misery smiled and stepped into the kitchen, finding Mike pouting by the sink and Kaleb slumped on the wall bench.

“How long have you two been a couple? More than a few years? Because it’s obvious the first love between you is over.”

Mike and Kaleb exchanged glances. Misery shrugged and found herself some breakfast, and Mike took a seat to make room for her. Then they just sat at each end of the table, brooding.

Mike inhaled, but Kaleb was faster. “Won’t do it.”

Mike growled and glanced at Misery. “Are you just as stubborn?”

Mike left the kitchen, and Kaleb drummed his fingers on the table.

“I’m gonna go do the laundry. Do you have more?”

Kaleb got up and left the kitchen, too, leaving Misery to smile at the two odd friends.

Keelan collected his and Mike’s dirty clothes before entering Misery’s room to look at what she had gathered. More like gathered individually all over the floor. To his surprise, he discovered a small stack by the door. He collected the stack and the rest in the room, stopping short when he noticed that the t-shirt under her pillow was one of his.

He glanced at the door before smelling the shirt. It smelled of her, so maybe she slept in it. Smiling, he bundled it up with the rest.

Once in the cargo hold, he sorted the clothes and hung them on the rack while listening to the rhythmic sounds of Mike’s fists impacting on the soft leather of the boxing bag.

Keelan’s hands stopped the sorting, and he held up a bra with a B-cup.

How did she pass as a boy?

Keelan made a new stack with Misery’s clothes while contemplating how they were going to locate underwear she could fit. She certainly wasn’t going to be wearing Mike’s boxers.

In the stack of clothes, he found the answer to his question about how Misery had masked her feminine attributes—a flexible fabric that could be tied. It fit the circumference of her chest. He wondered if that was why she’d tried to hide instead of run when the bounty hunters had been after her. Maybe the chest compression had made it difficult for her to breathe enough to be able to run for long.

He continued to empty her pockets and found a white... thing. He had no idea what it was, so he pocketed it and hung the rest of the clothes in the cleaning closet, programmed it, and turned to join Mike in the training room while the gases did their job at cleaning their clothes.

Mike was stretching after his workout.

“We have a few things to work out,” Keelan said, leaning against the door frame.

“Yeah, how you’re gonna come when we deliver and cash in a bounty.”

Mike looked up. “Okay, that one’s relevant, too.”

“And she needs to learn to empty her pockets. Do you know what this is?” Keelan held up the white cylindrical thing.

Mike smiled. “It means the dilemma of finding her clean underwear her own size might soon be very relevant,” he said, walking to Keelan.

“It’s a feminine product,” Mike continued, and Keelan raised an inquisitive brow. “For when they bleed.” Mike made an and-so-on motion.

Keelan must have looked like a question mark, because Mike finally chuckled and made a demonstration with his hand and the thing—making a loose fist with one hand, and pushing the white thing into the fist from the bottom, adding a knowing expression.

Something clicked in Keelan’s brain, and he took the thing and put it in his pocket. Shaking his head, he wondered how he could know so little about women and their... products. Maybe he should call Alice and ask for help—she’d been a teenage girl once.

But first, Keelan returned upstairs and found one of his own clean t-shirts. He put it on Misery’s pillow and put the feminine product in the drawer of the nightstand.