Scorned siren, Luna, seeks to heal her broken heart on the mystical Wiccan Haus Island, but she doesn’t have a reservation. So, she sneaks onto the island, hoping they’ll let her stay and rent a room. But there has been an assassination threat against one of the Wiccan Haus owners, and Luna’s unscheduled arrival makes her a prime suspect. Nate, a Sasquatch working for the Para-Elite Force, has come to the private island undercover, posing as a guest. He must flush out the assassin. When he’s assigned to trail the hauntingly beautiful siren, everything goes sideways, and Nate is shaken to his core with yearning and desire. His soul mate could be the assassin, and he may have to choose between duty and love.

Excerpt HERE:
Nate kept his gaze lowered and trained on Luna who sat next to him, following instructions. After lengthy inhales and exhales, too many in Nate’s opinion, it was time to reposition.
“If you’re ready to move on from belly breathing and meditation, then I invite you to move onto your hands and knees for some cat and cow stretches.”
He remained seated while Luna shifted to all fours. Mesmerized and turned on by the way her lithe body moved, he dragged in breaths and exhaled with loud blows. Eventually, he participated, learning the positions and movements of a sun salutation. Completely out of sequence with the class, rolling like the undulating surf, he half-listened and vaguely applied himself. As Luna swept through sun salutations, his idea of meditation was staring at her perfectly shaped ass pointed in the air when she held downward dog. Oh the things he imagined doing to her in this yoga pose. Yoga was leaving his one particular muscle stiff.
“Ah, nicely done, folks. Now we will pair up for a stretching exercise.” Trixie walked through the group of eight participants and paired off couples as she skipped by on nimble feet. “You two partner up.” She pointed to Nate and Luna, the last couple in the row on the corner of the grass.
Nate smirked at Luna’s frown. He couldn’t deny she’d caught him staring at her more than once. And, oh, if he was going to be touching her, then he wished the rest of the class would spontaneously disappear. He volunteered to go first. It was important he moved about and adjusted how his cock tented in his loose-fitting short. He had to give himself a mental shake and shut down the compass in his pants that pointed at Luna—his new north.
Finally, mimicking the others, he lay flat, face up, arms out to a T. His gaze stayed on Luna who stood off to the side fiddling with the strap to her bikini top.
Visiting and helping each couple, Trixie reached Nate and Luna last. Trixie said to Nate, “That’s a good start. Now, lift one knee and rotate it across your body. Yes, you’ve got it.” She motioned to Luna. “Kneel here and place one hand on the side of his knee while you place the other on his shoulder.” Trixie whispered in Luna’s ear, “Don’t be afraid to lean in. Nate is larger than most, so he could do with more pressure.”
Luna slid her palms around for ideal placement. His muscles tensed. She must have felt it because her gaze flew to his.
Trixie withdrew, though her tranquil voice floated over the guests. “Gentle pressure, folks. And those laying against the earth, feel it’s gravity, and breathe into the stretch.”
Luna flicked her gaze to the grass. He studied her delicate profile and pink cheeks. Because of their vast size difference, Luna practically laid across his muscled torso. Her thin but shapely arms were spread as far as they could go. Her dark hair hung heavy on his chest. He wished his T-shirt would vanish so the silky strands caressed his skin. After a few moments, they had to alternate sides. And then change positions. It was her turn to lie down. 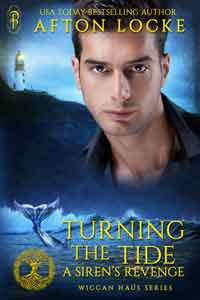 Turning the Tide: A Siren's Revenge
Afton Locke
In Shelf
$2.99
Tweets by
sirenbookstrand