Leigh: 3 - The Trouble with Co-Workers

It started out so promising. A little bit of supper...good conversation...even a few laughs. Then it happens. What's office protocol when you bumble into a date with a colleague without even realizing what was going on? 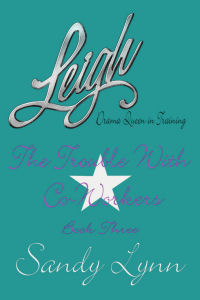 Leigh: 3 - The Trouble with Co-Workers

Leigh was staring at her phone. She was debating on whether or not she should open the text she'd just received. It was from her ex, and the last time she'd opened something from him, she gotten an eyeful of his girlfriend's ass. That was not an experience she would care to repeat again. Ever.
She could probably get Sally to read it for her. But if it was bad, the woman would just make a face and have a response typed out and sent before Leigh could stop her. She could just delete it. But what if it was important? Something she needed to know about?
An email came up on her screen.
What's wrong? You haven't been laughing all day. :-(
It had been just over a week since she'd taken the chance and emailed Jim. Once he realized she was just being friendly and not just trying to pump him for info about himself, he'd opened up.
Just not having a very good day today, she responded.
Picking up her phone, she flipped it open to see the message saying she had a text waiting to be read. She put it back down, still open, on her desk. Should she or shouldn't she? Damn him! He knew her curiosity would kill her--that she'd have to see what he wrote.
She attempted to work on a file, but her eyes kept darting over to the phone. She didn't want them to. They developed a mind of their own. With a sigh, she opened the text message.
I think you left some clothes at the house. Would you like them back?
Leigh's jaw fell open. Wow. That was almost nice of him. Had he hit his head on something and developed a decent personality as a result?
No, I didn't leave anything, but thank you for asking. She hit send, certain that her text was equally polite.
A minute later there was a beep from her phone. Another text from her ex. What could he want to say this time? It couldn't be bad, right? After all, he'd shown her just a few minutes earlier that he knew what manners were. With almost no hesitation, she opened his text.
No, I'm quite certain they're yours. Judy doesn't wear that size. She's much smaller. So they can't be hers.
Leigh gave up. She was tired of controlling herself. She started to bang her head on the desk. She should--bang--have known--bang--that he would pull--bang--something like that--bang.
She made the mistake of looking up before she allowed her head to fall to the desk again. Jim was standing at the edge of her cubicle, staring at her.
Perfect. Just what she needed, more humiliation.