Things that make you go Grrrrr.

Have you ever just wanted a man who would grab you and fuck you against the wall? Leigh does. And after a few mishaps, she isn't afraid to admit it.

But where does one go to find the kind of guy she's looking for? 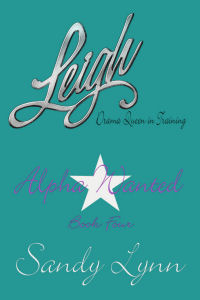 Looking up into Kyle's face, she was ready to start arguing right there that she would not sit around idly while some other woman tried to fuck him in a bar. She wouldn't apologize for what she'd done. And despite how mad he appeared, she wasn't the slightest bit afraid that he'd hit her. In fact, she was soaking wet.
His eyes narrowed more and with no time to stop him, he leaned closer.
Instead of yelling, Kyle crushed her lips against his own. His tongue thrust into her mouth. It was demanding and she was all too happy to oblige--to give him everything he asked for and more. Her pussy dripped in anticipation, and she didn't care who was staring at them.
As the kiss went on--his hand was still holding a fistful of her hair, keeping her positioned exactly the way he wanted her--her entire body started to tremble with anticipation.
From a distance, she felt him release her wrist. He skimmed his fingertips up her arm before dipping to follow the top hem of her shirt. The callused pads of his fingers teased the swells of her breasts before rising. Up to the base of her neck, he didn't stop until his hand covered her neck.
Whenever the ass--her ex--had tried to do the same thing, she'd freaked. She'd always hated it. But when Kyle did it, her body screamed out for more. With his tongue still possessively in her mouth, staking his claim on her, Leigh silently pleaded for his hand to leave her throat. Not because she didn't want it there, but because she wanted to feel it on her bare breast. She wanted him to reach beneath her shirt, and tease her nipple. She didn't care who was watching.
Hell, right now he could just bend her over and fuck her in the bar and she wouldn't utter a syllable to stop him. As though he'd heard her silent plea, she felt him moving his hand lower in a slow trek back down her body. She could feel his fingertips skimming over first the neckline of her shirt, then the lace of her bra. After an eternity, he was dipping beneath the material to caress her flesh--
“Leigh!”
“I didn't do it!” Leigh yelled as she jumped at least three inches out of her chair.