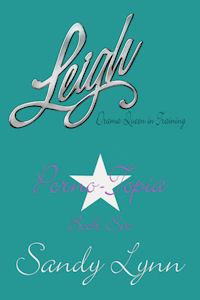 Damn, Cindy hadn't been joking when she said they were discreet! She turned the simple yellow envelope this way and that, examining it. She'd never have suspected the dirty little secret held inside of it.
One of her neighbors smiled as they approached the mailboxes. This snapped Leigh out of her thoughts, and she felt her face heating up guiltily. With a very nervous smile, she hastily walked in the direction of her apartment. Would the man know what she had in her hand? Did guys have a sixth sense where porn was concerned?
What would she do if Kyle saw? What if Kyle knocked on her door while she was watching the movie? What if Chris texted? Or worse, called! Could she remember to hit mute fast enough?
Her breathing grew shallow as she started freaking out before she even entered her apartment. This was definitely a bad idea. Nope she could not do this. Getting that movie had been such a colossally bad idea. She couldn't do it. She'd just bury the unopened envelope in a drawer and forget it existed.
Inside the safety of her apartment, Leigh dropped the package on the couch. It could stay right there until she figured out where she could put it so it would remain undisturbed. Yup. That was the ticket. As the saying goes: Out of sight, out of mind.
She sat on the far end of the couch, as far away from the damning yellow package as she could.
Picking up her laptop, she began the process of starting the machine.
Her eyes returned to the package.
“Don't think about it. Nope. Curiosity killed the cat…”
Boy, was she full of corny platitudes at the moment. “Next thing you know, I'm going to be talking to myself.” Looking around the empty room, she sighed.
Pulling the cell phone out of her pocket, she tried to call first Bryna, then Sally. Neither of them answered. She declined on leaving a voicemail for either of them. She was sure they were doing something important. Besides, she'd whined to them enough. Should she really waste however much of their patience with a whining session about whether or not she should watch a porno?
They'd tell her to grow up and make her own decisions. And she had to agree with them. It was time for her to start deciding things for herself.
And she'd decided not to watch it. End of story.
Looking back over at the package, Leigh wondered if it had somehow gotten closer to her. As she stared at it, she wondered if she should at least open the envelope. After all, she knew she wasn't going to return it. It was embarrassing enough that her bank statement would show she'd made the purchase. She was not going to go through the hassle of testing the company's return policy.
Nope. She'd just put it away. It would be exactly as though she'd never gotten it.
Well…after she checked to see if it was the right movie. What would be the harm in that? She was just checking to make sure she got what she paid for.