A small collision has Leigh's life turned completely upside down. She's also caught between two men and isn't sure which one is the bigger problem...the guys or the car! Is it cheating if she hasn't technically done anything with one of them, and the other seems happy with their non-arrangement? And will she have to lose weight not for herself, but just to fit into her car again? 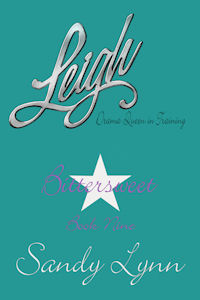 "See, this is why I just need to go home and climb back into bed." Leigh felt near tears. How much worse could her day get? "I just wanted a cup of tea," she whispered, her voice betraying the depth of her inner turmoil. "Talk about it. You'll feel better." "I just wanted to file my paperwork. I just want to be divorced. Free from that asshole. I want to know that he can't touch any part of my life anymore. But I get downtown and there's only one parking space, so I take it. And then this car made a big deal about having to go around me to get out, so I figured I was in a good mood, I could move up just a bit. But the road was wet and when I tried to make sure I wouldn't hit the car next to me—I didn't even touch the gas pedal!—but my car scraped up against one of those ugly yellow poles. "Then I get inside, and they confiscate my cell phone. I get to the right office and have to stand in an outrageously long line only to find out that because I'm missing a signature, the entire trip was for nothing! Nothing! I have to go back and try again later! "And then there's Jonathan. He doesn't have to get up as early as I do, and I don't want to tell him that I can't spend half the night talking to him on the phone, especially since he seems so willing to spend half the night talking on the phone. And not just phone sex-kind of talk, he actually talks to me. So how can I tell him that I need to get off the phone and go to sleep? "Then there's Kyle. I want so badly to just grab him and yank him into my apartment and have wild and crazy, dirty, dirty sex with him everywhere, but if I do, am I cheating on Jonathan? I mean, we haven't made any promises or said we'd be exclusive, and long-distance relationships are really, really hard anyway. But do I have the strength to tell Kyle no if he does pop up and wants to do bad things to me that leave me trembling and aching, practically begging for more?" Sally put her arm around Leigh's shoulders. "Wow, you have had a rough day." "Ya think?" Leigh looked at her, then out of nowhere began giggling. Everything seemed so absurd. Shouldn't she be glad that she had two guys that she was lusting after? Or even better, seemed to lust after her! Who was she kidding? No matter how many men were looking at her like she was a pastry, she wasn't used to it and wasn't sure if she should even be playing these games. "Cheer up. Things could be worse." "How," Leigh asked unsure of what else could happen to her at this point. "Did you miss the part about my car door only opening about four inches?" "No, I didn't. Well, your ex could--" "Stop!" She put her hands over her ears. "I changed my mind. I don't wanna hear it. The way my luck has gone today, the bastard will probably hear you and start on that torture tonight or tomorrow!" Sally laughed as she shook her head. "The sad part is, you're probably right," she said, continuing to giggle.