Let Me Be Your Hero (MF)

The Peak of Love 1

Retired army doctor Aden Henderson is on his way home when he meets compulsive liar Georgia. Unable to ignore the sexual attraction he feels, he decides to give her the fantasy she craves, in bed and out of it. He pretends he needs her to be his fiancée for a few days. This is before he realises just how broken Georgia is. Will his crazy plot cause her irreparable damage?

Georgia Francis hasn't told the truth for a long time, and she certainly isn't going to start with Aden, even if he is drop-dead gorgeous. Determined to ignore her longing for him, she tells him she's an out-of-work actress, half hoping it will drive him away. But it seems that he wants her, too. Unfortunately the past has a way of punching people in the face, and Georgia has been hurt that way before. 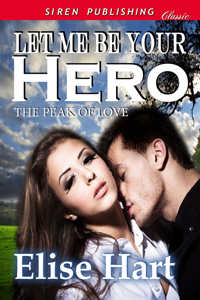 Let Me Be Your Hero (MF)

The Peak of Love 1

More From The Peak of Love

The guard brought Georgia her drink, then walked down the carriage and asked Mr. Dark Suit if he needed anything. The conversation that ensued seemed to involve Georgia, with the guard gesturing in her direction. This gave her a brief glimpse of Mr. Dark Suit’s other profile as he turned to look at her. It was clear then that he didn’t have a bad side. She hoped he wasn’t going to complain about her scruffy presence. She considered asking Ms. Camel Coat for some female solidarity, but she looked to be the childless type. She probably had a baby in her lunch break, then sent it home with nanny for a nap whilst she returned to work. Georgia had met lots of women like her at the nursery where she worked.

When Mr. Dark Suit got up and faced Georgia, she felt her breath catch in her throat. Nope, he definitely hadn’t been hit by a shovel, but he did appear to have been exquisitely carved from the Derbyshire landscape outside the window. He was rugged, with piercing eyes. She did not like the shrewd way he looked at her. She tried to ignore the fact he was heading in her direction and gazed out of the window, finding some fascinating sheep to peruse.

“Are you feeling okay?”

She had dreamed of a man with a deep and resonant voice like that. She imagined him whispering in her ear. It was like thick, hot chocolate pouring over vanilla ice cream, melting it at its core. She shivered involuntarily and turned to him.

“The guard tells me you’re pregnant and that you were feeling a bit faint. I’m a doctor…”

“Oh, I’m fine now, thanks. It was just all that standing.” Oh God, now I’m in trouble. She wondered if he could tell by looking. He looked as if he might. Close-up his eyes were blue, and appeared to be gazing right into her soul.

To her utter mortification Doctor Dark Suit sat down opposite her. Ms. Camel Coat looked at him appraisingly and for a moment Georgia wondered why he hadn’t chosen to sit opposite her. She was more his type, albeit a little older than him.

“I’m actually a doctor in the army, or I was until recently, but I do know how babies are made.” Georgia didn’t doubt that for one minute. God help her, he wasn’t only gorgeous and a doctor, but he was a soldier, too. It was almost too much. Maybe he was a liar. He could be one of those men who pretended to be airline pilots and conned gullible women out of their life savings. But that didn’t fit. He was too upright and too honest looking. Still, she supposed that was how they succeeded. He’d be quite welcome to the few pounds in her bank account if he was willing to seduce her for it. She bumped out of her reverie, realizing he’d been speaking.

“How many weeks gone are you?”

“Early days yet then. You need to take care of yourself. You look a bit pale.”

“I’m just getting over a bad case of tuberculosis.”

“Tuberculosis?” He sounded disbelieving. “And you’re pregnant? That’s very serious. You shouldn’t even be on the train with a communicable disease.” She noted the wary tone that entered his voice. She was used to that, and in a moment he would make his excuses and leave. She would be glad when that happened. She almost wilted under his sharp gaze.

The other passengers and the guard visibly moved back several inches.

“No, that’s not it. Tonsillitis. I always get those two mixed up.”

Colonel Doctor Dark Suit’s vivid eyes twinkled. “That’s quite a big mistake to make. Have you been off work?”

She wished he wouldn’t look at her the way he did. She was sure his eyes had an inbuilt lie detector. If he was a soldier, he probably knew all sorts of interrogation techniques. With handcuffs. She pushed that thought aside, as it led her down a completely different route, and one that did not involve a bright electric light in a darkened interrogation room or the words Ve haf vays of making you talk. “Will I have seen you in anything?”

“Probably not. I’ve just finished doing my first film. I had to snog Jude Law. It’s a lousy job, but someone’s got to do it. Gracia magazine has called me one of the brightest new stars of the twenty-first century.”

“No, you probably read The Lancet or something worthy about battle wounds. Daddy was a doctor.” She couldn’t stop herself. And what did it matter if she couldn’t? He was already looking at her as if she was a special case. One more lie and he’d be out of there, and she wouldn’t have to deal with the strong attraction she felt toward him. It had always worked in the past. Then again, that was with men who had no sexual effect on her whatsoever. Colonel Doctor Dark Suit was the sort of man she’d dreamed of attracting, knowing that she never would. Which was exactly how she wanted it. Wasn’t it?

“Was he really? What was his area of expertise?”

“He was a renowned brain surgeon. Mummy was his head nurse. They fell in love whilst nursing a patient who’d fallen from her horse. Because of that I was never allowed a pony.”

“I’m sorry to hear that. What’s your father’s name? I might know him.”

“But if he was renowned, I’m sure I’d know his name. You’re not that old. What? Eighteen?”

“I’m not. I’m twenty-six.” Georgia could hardly blame him for doubting her. She still dressed like a student, in baggy jeans, T-shirt, and a gray hoodie.

“And your father’s name?”

“So a night of unbridled passion is not completely out of the question then?”

“Oh, you!” She splashed him with water, laughing through her tears. He sat up and caught her by the waist, pulling her so that she was sitting with her legs on either side of him. His cock pressed between the lips of her throbbing pussy.

“Go on,” he murmured, nibbling at her earlobe, and cupping her breast in his hand. “Get it out of your system. All those dirty words you’ve got lurking beneath that demure exterior. I’m a man. I can take it.”

“Look,” he said seriously, “I really want to make love to you, but I don’t want you to agree, thinking you’re paying me back for Iris’s care. That’s something entirely separate from whatever might happen now.”

“I know,” she whispered. She wanted him so much at that moment, she was prepared to throw caution to the wind. If they were to part the next day, would it be so wrong for her to take away with her the precious memory of being in his arms?

He rolled her nipple between his fingertips, and his mouth found hers in a kiss that was both tender and reverential. He increased the pressure, slipping his tongue between her parted lips. She pressed her cheek against the day’s growth of stubble on his chin, and breathed in the aroma of his expensive aftershave. She traced the outline of his torso with her fingers, following a line of fine hairs down his stomach, and under the water. She felt his cock growing in her hands as she began to stroke him. Her eyes widened and she giggled shyly when she realized just how big he was.

Initially their lovemaking was slow and thorough. As if he understood her hesitance, Aden took his time to arouse her, starting at her breasts, suckling at her nipples until she thought she would explode with pleasure, occasionally scooping water in his hands then trickling it on her body, before licking it off. When she thought she could bear no more, his fingers parted the lips of her pulsating pussy and stroked her clit before plunging into her, first with one finger, then with two. She arched her back, crying out at the sudden assault on her already-overwrought senses. It was wonderful, but it wasn’t enough. She needed more.

Aden lifted her from the Jacuzzi and carried her to his bedroom, where he said he had condoms in the drawer. He laid her back on the bed and once again took her rose-tipped nipple into his mouth, sucking and creating a sensation which almost tore at her womb. His mouth travelled down her belly, whilst his hands spread her legs, exposing her to him. He licked the length of her pussy whilst she cried out in ecstasy. With his fingers and his tongue, he explored her, driving her wild with longing, until she was begging him to finish what he had started.

He ignored her and she felt him smile against her as his tongue and fingers continued to bring her to a frenzy. “Stop fighting it, Georgia,” he whispered at one point. Then his tongue was on her again, exploring her in a way no man had ever done before. She blushed even as she enjoyed every second of it.

“No, I can’t…I…” And that was when she found she could. The orgasm that followed shook her to the core. She forgot where she was, or that people in the next room might hear her, as her head rocked from side to side and she screamed out, begging him to enter her. Aden kneeled on the bed and positioned himself between her legs, pulling her hips up to him and placing his sheathed cock against her slit. Even then he did not enter her straightaway. His fingers caressed her again, bringing her to the brink of another orgasm. She wanted to touch him, too, but could not reach him from where she was. It was as if he deliberately held himself away from her whilst he tormented her beyond reason.

With one thrust his cock was inside her, moving rhythmically as she moaned beneath him, lifting her hips to meet his steady rhythm. The pace quickened, along with their hearts and their breathing. Each thrust sent a million electric shocks through her body, pushing her further and further toward the edge. “Georgia…” he groaned, his eyes dazed with passion. “Dear God, Georgia…” Then they were both over the edge. 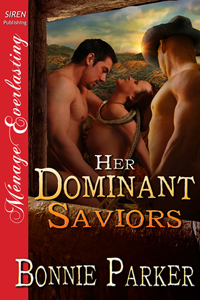 A Menage to Celebrate (MFM)
Marla Monroe
In Shelf
$4.50
Tweets by
sirenbookstrand