Life of the Party

Ellie Marx celebrates anything and everything. Zach Resnick wants peace and quiet. With both stuck in the same house, it's a collision course that just might lead to love. 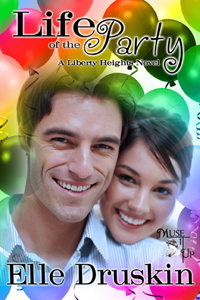 Life of the Party

The thought of a cool shower and shave after the long haul flight from Mumbai seemed like heaven.

He snagged a towel from the linen closet and headed to the bathroom. The handle stuck, and he yanked a little too hard so the door slammed against the wall.

His jaw dropped wide enough for a truck to drive through. The most gorgeous backside he’d ever seen was bending over the bathtub. Perfectly shaped firm legs that seemed to go on forever and ended in a tight, luscious ass. He gulped, and his groin reacted involuntarily.

The door slammed in his face. Zach stood as if rooted to the floor. Jake didn’t mention any other guests. And it definitely wasn’t Ed borrowing the shower because of his plumbing problems. Hell, he might be a trifle jetlagged, but all his hormones had gone on Red Alert because that had to be the sexiest woman on the planet.

He headed downstairs to Jake and Hayley in the living room who looked up at him.

Zach nodded. “Yeah. I found something else. That’s some cleaning lady, you’ve got.”

Jake frowned. “We don’t have a cleaning lady.”

Before he could explain, feet pounded down the stairs. Zach turned over his shoulder and staggered. A brunette with flashing green eyes glared at him. Wrapped in a pink satin robe that clung to her body but did nothing to hide her perfect curves, she planted her feet in a vee with her hands on her hips.

“Can’t a person get any privacy around here?” she hollered.

Jake’s eyes widened. “What are you doing here?”

The woman flashed a familiar grin at Jake, and Zach wracked his brain for a name. There was something about her, but he couldn’t recall meeting a woman this hot. Even with the damp hair that curled around her face, she was dynamite.

“Surprise! You’ll never believe it. The cruise ship had to shut down. An outbreak of a gastro bug on the last two sailings; the whole thing has to be cleaned out. Plumbing, air conditioning, the works, so the entire crew has a few weeks off. I figured I’d better head right here what with Hayley having another baby. I bet you didn’t even have a baby shower yet.”

Hayley tried to rise from the sofa and plopped back down again, but that didn’t deter the woman.

“You sit right down. Pretty big, no offense. How long to go? Not twins again, is it?”
She didn’t bother to wait for an answer but kept up the rapid fire chatter. “I figured you could use some help, so leave everything to me. You know how terrific I am with organizing stuff. This is going to be fun, only I didn’t count on some pervert walking in on me in the bathroom.”

She whirled around and glared at Zach. Her eyes narrowed. Without warning, she punched his arm.

“Hey. What gives?” he snapped.

An arch smile lit her face. She glanced at Jake and Hayley who hadn’t recovered from the shock of the surprise guest.

“That’s for walking in on me upstairs naked.”

Before Zach could apologize, although it hadn’t been his fault, she punched him again.

The woman sniffed and shot a superior look at Zach. “That’s for not letting me in the tree house. The Junior Detectives Club. Boys only.”

Tree house? What the heck was this woman talking about?

“You shoved me right off the top of the ladder, and I fractured my wrist. Boy, were my parents mad, but nothing compared with yours.”

This couldn’t be that pain in the neck bratty cousin of Jake’s who followed them all over town.

She poked a finger at his chest and glowered. “You got it wise guy, and guess what? Little Ellie grew up.”
She sure did. Zach studied Ellie from the top of the damp curls to the red painted toes. That naked image flashed through his brain like a rerun of an old TV Show, only this one was x-rated. This was Little Ellie? The skinny kid with the glasses, and banged up knees. Holy cow. She was hotter than Texas chili. 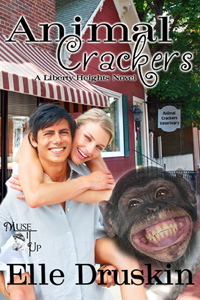