Lyman Wilbur might write about a hard-boiled sleuth, but he is about as far from that in real life as a guy can get. When he’s offered a job at Colosseum Studios, helping to put his latest crime novel onto the silver screen, he falls deeper and deeper into a world where lies, blackmail, and murder are part of real life.

And maybe he should know better than to ask too many questions, especially when powerful people are willing to commit murder and extortion to protect their secrets, but a young girl has been killed—and it just seems to Lyman that he’s the only one willing to find out the real story. 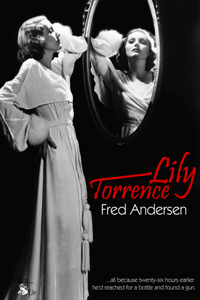 Lily had been sitting in the parking lot of the hotel for a while, in the red Plymouth roadster, thoughtlessly trickling the tips of her fingers along the hard circle of the steering wheel. She had told herself two dozen times to leave, had even started the car twice, and then shut it off.

In a turmoil of indecision, she stared at the reflection of her eyes and cheeks in the car mirror. All her life people had told Lily she was pretty, and she believed them, but it didn’t mean anything. Her mother had disappeared when she was still the center of Lily’s world. Her father had abandoned his three children to move in with a widow and her children. Lily had been raised by an aunt, her father’s sister. She had spent her high school years sleeping in a porch built onto a house on a street that might as well have been in a Mexican mining town, it was so removed from the rest of Los Angeles, or even America.

She gazed at the hotel entrance, where a doorman stood in a glade of banana trees and palm fronds. A car drove past, the top halves of its headlights blacked out.

Beauty was her way to be somebody, but it was not enough. That was why Lily had cried and begged her aunt and worked at anything to pay for dancing lessons, and why she sang in choirs, and acted in plays, and even learned to play an abandoned accordion she found in the closet.

And after untellable struggles, she had been chosen by God, it seemed, to live in the household of the glamorous Deborah Boynton. Yet this wonderful opportunity had plunged Lily into constant despair. She did not know why she had been chosen, or what her role was. In fact, all the other residents of the house, except Deborah’s uncle and son, were servants, or, anyway, employees. Although Lily understood that Deborah intended to help her with her career, Deborah hadn’t done anything except get her a couple of extra roles, and suggest Lily begin dance training again, with a teacher she knew. But you couldn’t be idle at Deborah’s house, so she helped with the chores. And waited.

Lily feared that Deborah had had a change of heart about her, and she wondered what wrong move, wrong word, wrong facial expression had done her in.

There was another explanation, of course—that Deborah had found out something awful about her. And there was plenty to find out.

Lily’s anxiety had doubled this morning, when Deborah, with a rare day off, had mentioned she was going into town to see her old friend Max Beckerman about a role—not for herself, but for a young protégée of hers. But she did not say it was for Lily. Deborah’s matter-of-fact manner had not encouraged questions, or even comment.

So was Lily in competition with someone else for something? And if so, for what? Having deduced that Deborah’s first stop would be the studio, Lily had driven there to wait. She’d seen the big Buick go in the gate, and followed it when it came out an hour later—to the Polo Lounge, to three different shops, and then to this hotel. Where now she sat wondering, not daring to go in.

She did not want to think about what Deborah was doing in there, but she couldn’t stop thinking about it. Her toe wagged against the brake pedal. Was it all about to end before it began? Had Deborah found out about Lily’s past, about the things she had done to survive, about how she had sold herself in the most shameful way?

Then, finally, she saw Deborah walking out with a man, arm in arm, sparkling, radiating glamour and sexual magnetism. The man was short, energetic, waving his hands as he talked. A type Lily knew all too well. Full of it, and on the make. One of those self-proclaimed geniuses that infested Hollywood.

And Deborah. So elegant, so simple, so relaxed. What an ass Lily had been to come here! It accomplished nothing, for there was nothing to be done, nothing to be learned.

The short man walked Deborah to the curb, where Emery, Deborah’s chauffeur, waited with the big Buick. The man opened the car door for her, and Deborah stepped in, laughing. The man leaned in there for a long time, kissing her, anyone could tell. Then he came up for air, smiling. He closed the door, and as the car pulled away he patted the back fender as if it were her ass.

Lily Torrence, born Lily Torres, watched the short man walk back into the bar. Whistling. The arrogant prick. Her mission had been foolish, but the anger and fear she felt would not be wasted. She was going to do whatever she had to do to stick with Deborah. She would become what she had to become. That was all.

Max really just went in for one more drink, and then he was going to a poker game. He sat at the bar. “Give me a weak Macallan and soda.”

The girl came in and stood there looking lost. Tall, with long, blonde hair and big knockers. She approached the bar, close enough to Max that he caught a whiff of perfume as she leaned toward the bartender.

“Please,” she said. “My car won’t start, and my friends already left.”

The bartender gave her a sympathetic smile. “I could call you a cab?”

Max raised himself up from the barstool. “Perhaps I could assist you.”

Max ordered champagne for her and helped her drink it. He suggested they go somewhere to eat, she asked if she could stop at her apartment. She said her name was Gloria, but by this time she could have told him anything, because by this time his lust was in charge and wanted very badly to be introduced to her. So of course they could go to the apartment. Taking a chance, Max reached for her when the door was closed, and she responded. They never did get to dinner.