When Abbi discovers that she's to be handfasted to her best friend Carter during the Litha Celebration, she does the first thing that comes to mind - run! As she's hiding from her best bud, and her family, she ends up spilling the entire tale to her long-time crush, Finn. But when Finn offers to help her out, she wonders if maybe he thinks of her as something more than his cousin's pesky friend. Is it possible that on this Litha Celebration all her dreams will come true? 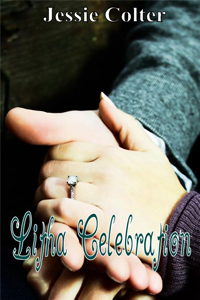 My jaw dropped, and I stared at my mother in horror. Surely I'd heard her wrong.

“You and Carter will be handfasted during the Litha celebration tonight.”

My mouth snapped shut. I couldn’t believe it. Had she really just said that? I mean, Carter was nice and all, but handfasted? And why had she waited until now to tell me? This was something major, not something you sprung on your only daughter the day it was going to happen!

“Mom, I don’t think of Carter like that. We’re only friends.” Not that he wouldn’t make some nice girl a fine husband one day, but it wouldn’t be me. It wasn’t that he wasn’t attractive, because he was. At six feet tall with black hair and deep chocolate eyes, he caught the attention of females young and old everywhere we went. He just didn’t catch my attention--at least not in that way.

“You and Carter were matched the day you were born. Now that you know your future lies with him, maybe you can focus on seeing him as something more than a friend.”

Mom’s eyes narrowed. “You’ll do as your told, young lady. You will not embarrass this family.”

“Mom, I know we’re Wiccans and we have traditions, but don’t you think this is a bit much? Who’s heard of an arranged marriage in this day and age? Besides, I’m only eighteen!”

“Things have changed since you were young. No one gets married at my age, not unless they’re pregnant.”

“You and Carter will be handfasted tonight, and that’s final. The coven has already been notified.”

With a final glare at my mother, I grabbed my purse and stormed out of the house. Normally, I would call Carter to tell him about my mom’s latest mad scheme, but this time was different. I did need to talk to him though. Surely if Mom had dropped the bomb on me today, his parents had told him, too. I wondered what he thought about the whole thing. Personally, I thought it was nuts.

I got in the car and slammed my door shut, taking my frustrations out on my poor Fiesta. My car was used to being pampered, not abused.

I backed down the driveway and headed to Main Street. Retail therapy was definitely in order. I could always use more clothes and books, and maybe I’d stop by a shoe store or two along the way--anything to take my mind off the upcoming celebration and ceremony.

Parking in front of Pages to Pages, I decided to feed my addiction to the written word first. When I walked through the door, I inhaled the scent of paper and ink. The small bookstore always felt warm and inviting.
“Hi, Abbi. Do you need any help?” Annabel asked from her perch behind the counter.

“I’m just looking. I ran out of books to read and thought I’d restock.”

“Let me know if you need anything.”

I smiled and nodded as I made my way back to the romance section. After the morning I’d had, love and romance should've been the furthest thing from my mind, but the opposite was true. My mother had not only stolen my future, but my chance at love, as well. It hardly seemed fair.

I immediately sought out the western historical romances. I’d always had a thing for cowboys, a rare breed in my small town of Navarre Falls, Alabama. No guy was hotter than a guy in a Stetson and boots. Just the thought of meeting one of the sexy cowboys from my books made me sigh. But I needed to face facts. If my mother had her way, I’d be handfasted to Carter within hours, and there would be no handsome cowboys for me.

Taking my selection to the counter, I paid for my books and took them out to my car. I put my sack in the trunk and headed over to Chloe’s Closet since Cait’s Boutique was a bit out of my price range. I needed some new capris and maybe a new sundress or two. The one I had on was my favorite. The color had started to fade to a light turquoise, but it hugged me in all the right places. At barely five feet tall, I had to show off my figure to get a little attention, otherwise I was overlooked by the male population.

My phone jingled, and I checked it. There was a text message from Carter asking me to meet him. I hesitated a moment, not knowing what to say to him. I finally texted back and told him I needed some space. My phone jingled again a second later, but I ignored it.

I tucked my phone in my purse and shopped for the next hour. I ended up buying two pairs of capris with cute matching tops, a sundress, a new bathing suit, and a few pairs of shorts. Laden with packages, I bustled out of the store and down the sidewalk. After putting my bags in my car, I walked around the corner to B&L’s for a milkshake. It wasn’t the most popular place in town, which is why I liked it – it was quiet.

I sat in a booth and ordered a strawberry shake. While I waited, I pulled out my phone and read Carter’s last message – I’m going to find you. We need to talk. Well, crap! Carter knew all of my hiding places so it was only a matter of time before he found me.

Her Canadian Dream (MF)
May Raymond
In Shelf
$4.99