High school senior Jason Thompson finds two dolls that used to belong to his grandfather, and photographs showing his grandfather in bed with two very beautiful, very real women. When he finally learns his grandfather's secret, he finds a new world has opened. Not only can he transform the dolls into any woman that he desires, but the women appear to find him incredibly attractive from the minute they arrive. After a month, Jason finds that the dolls are much more than a potential source of celebrity threesomes. One of his teachers is horribly depressed. Can the dolls help him learn why, and possibly put her on the path to future happiness? One of his classmates seems locked in a cycle of trading one bad boyfriend for another. Can the dolls help Jason break up her current relationship, and show her the advantages of going out with one of Jason's best friends? And finally, what about Jason himself? The new transfer student has turned down dates from every jock in school, and shows every sign of being as attracted to Jason as he is to her. But she turns him down as well, and Jason finds she has a mysterious secret of her own. Are the dolls just what Jason needs to unlock it and help them both find true love in the process? 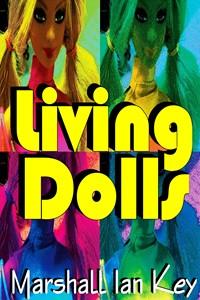 LIVING DOLLS is a highly entertaining coming of age story… [T]his author proved to be fun and downright inventive..."

Someone who wasn't an eighteen-year-old high school senioran eighteen-year-old virgin no lessprobably would have come up with a more likely explanation for all of Grandpa's stuff than the one I invented. Maybe an explanation like the photo doctoring one Mom had settled on. That was fine for her, but wouldn't it be great, I thought, if my grandfather had been able to turn these two dolls into real live people? If they really were, like Grandpa had written, living dolls?

I spent the next two weeks at school daydreaming about it. Oh, I went to class every day and, of course, I dutifully did my homework each night. But the one time Ms. Dodge called on me in class, I was in outer space, thinking about which girls I'd like to have my own photos of.

Kerry Marshall was at the top of my list. She'd moved to Hardwood over the summer, and I'd fallen in lust with her on the first day of class. She was in most of my classes, which meant she was smart. And she was beautiful as well. From the very first day I saw her, with her long red hair, her brilliant, shy smile, and her nearly-adult body, I was smitten.

But I'd joined a big club. As far as I could tell, Kerry had been asked out by every unattached guy on the football team and most of the attached ones as well. When they struck out, etiquette permitted the soccer team to take its turn. No go there, either. Maybe she just didn't like jocks. Well, if she was waiting for one of us on the math team to ask her out, she'd be waiting a long time. My buddy, Gordon, claimed he wouldn't ask a girl out unless he had it in writingsigned, witnessed, and notarizedthat the girl would accept. Gunner and I weren't much better, and that explained why we didn't date much. Or at all, really. But if any girl tempted me to take the plunge, it was Kerry.

Unlike Sue Waggoner, the head cheerleader, who I could dream about, of courseSusie was well worth dreaming about, with long, silky blond hair and a nice figure. A very nice figure. As a cheerleader, though, she was completely off limits to a nerd like me even if she wasn't the personal property of our star quarterback. And before him, our star wide receiver. And before himwell, Susie had an unfortunate history. By the time we entered high school, she was already widely known as the school slut. And with her unfortunate middle initial, "F," she was also widely known, in the boys' locker room anyway, as Susie Fuck Wagon.

The fact that she was unavailable in real life to me didn't stop me from fantasizing about her, though. As the stats guy, I got to spend every football game looking over Hardwood High's fine collection of cheerleaders, with Susie front and center. I couldn't be real obvious about ogling her, because Gunner'd had a crush on her since he was, like, three. He was an athlete and could, therefore, look at Susie without being punished by the gods of high school. In fact, he and Susie were neighbors, and they'd always been friends. But she dated the football-player types, and Gunner, although an amazing three-point shooter in basketball, didn't have a football player body. Or, fortunately for the math team, a football player brain. Gunner often helped me out in the booth when I did the stats, and to keep our friendship intact, I had learned to keep my eyes on the other girls when they were doing those high kicks.

Girls like Julie Pinsky, another hot cheerleader in my class, and another featured performer in my daydreams. Julie had shoulder-length brunette hair, a nice bodymaybe not in Susie's league, but hell, who was?and the best legs in school. True, Julie'd been going out with our classmate Andy RichardsonRichie Rich to those of us whose fathers weren't lawyers and didn't have their own convertiblessince the ninth grade. But that was real life! This was living doll world. Julie might not be the brightest girl in the class, but she was gorgeous, and nice to boot.

I'd apparently been making eye contact with Ms. Dodge.

"Do you agree with Mr. Ackerman?"

"No, ma'am," I said slowly, racking my brain to try to pick up some thread of what she and Mr. Ackerman had been discussing while my head had been full of Kerry, Susie and Julie.

"Why not?" she asked quizzically.

Ah, so apparently Mr. Ackerman had said something intelligent.

"Principle, ma'am," I answered. "I already agreed with Mr. Ackerman once this month, and I don't want to see him get a swelled head."

The class burst out in laughter. Even Mr. Ackermanmy good friend Gordonlaughed. Hell, even Ms. Dodge had a little smile on her face when she turned back to the blackboard. That alone was a rare event. She was a student at the local college, and our student-teacher in English. Our regular teacher, Mrs. Josephs, had been ill for a good bit of the year, so Ms. Dodge spent a lot more time at school than any of the other student-teachers we'd ever had.

And we spent a lot more time in class. Gail Dodge was quite possibly the most beautiful woman any of us had ever seen in person. In fact, none of the guys ever missed a single class with her. She was about tall with long black hair and an amazing dark complexion. But she never seemed to smile. And she dressed like a nun. And she was a tad on the skinny side. But I was just being picky. Because her thinness had its advantages, namely in showing off an incredible set of tits, even underneath her dowdy clothing. The scuttlebutt in the locker room, based as far as I knew on absolutely no evidence, was that she was an impressive 38 D-cup.

Fortunately, I didn't have to rebut Mr. Ackerman's opinion in any more depth. So, as Ms. Dodge began writing something about Herman Melville on the board, I simply added Ms. Dodge to my list of dream girls.

Of course, I also had my list of celebrities: Sarah Michelle Gellar, Catherine Bell, Jennifer Garner. I could make a very long list. Heck, if I could just get Grandpa's friends, Cheryl or Raquel, I'd be happy.

What I had was nobody. I searched all the rest of Grandpa's boxes, looking for the secret I just knew had to be there, and found nothing. Finally, just as I was about to put everything back in the attic, the world changed. It was another Friday afternoon, about six o'clock. Fortunately, there was no football game that day eitherapparently, our hard-working football players couldn't manage to play five weeks in a row, so there was a bye day built into the schedule. With one of the dolls in my left hand, I picked up the last of the magazines with my other hand to throw it in the box.

And then it happened. I felt the doll in my hand begin to warm and soften. I looked down and stared in astonishment as the doll's plastic features gradually changed, becoming real hair and skin. She was still only twelve inches tall, but the doll looked exactly like the woman on the cover of the magazinethe same dark blonde, shoulder length hair, the same blue eyes, the same incredible body. The only difference was the doll was wearing a gold strapless bikini which covered up a little too much, while the model in the magazine had on a green and gold bikini that showed off an absolutely incredible chest. My Cheryl looked up at me with those deep blue eyes, stretched slowly in my palm, and, well, purred is probably the best word to describe the sound.

Man to Man
G.A. Hauser
In Shelf
$6.00
Tweets by
sirenbookstrand